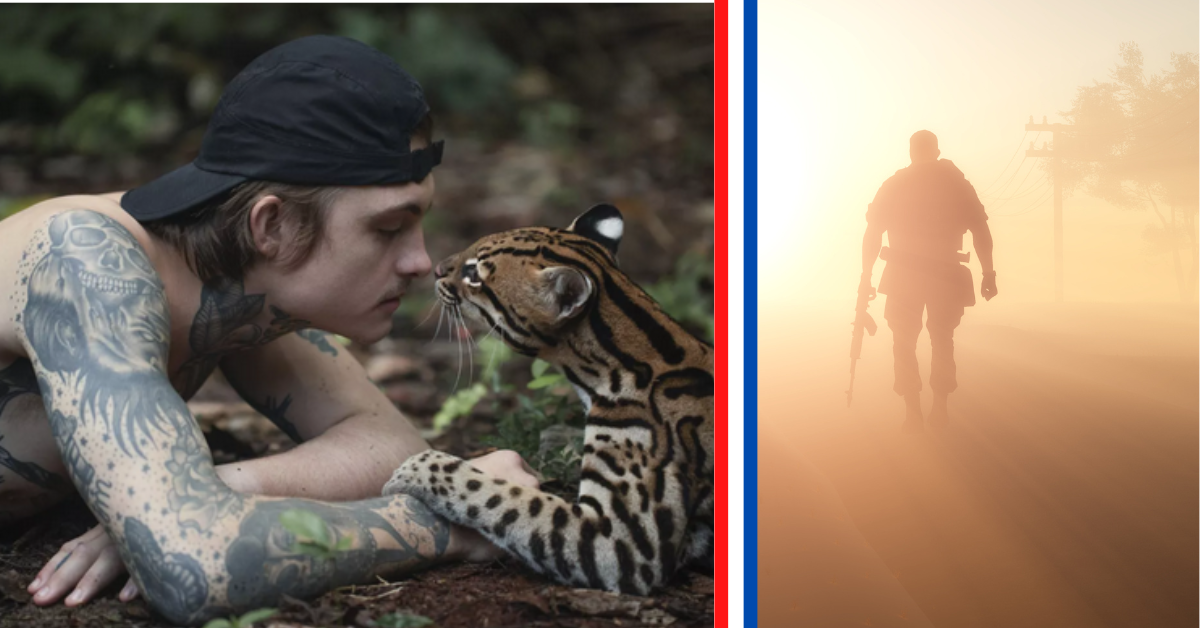 Wildcat is so much more than just another combat veteran story. The Amazon Studios documentary goes deep into the Amazon jungle, demonstrating the power and potential of animals to radically transform the trauma healing process. Directed by filmmaker couple Melissa Lesh and Trevor Beck Frost, it was a movie that changed everyone involved.

“I don’t think we realize quite the depth of experiences and kind of how difficult it would become,” Lesh explained. For Frost, it was personal. “I myself have struggled with depression for about 10 years now,” he admitted.

Both were drawn to complex human stories but finding British Royal Army veteran Harry Turner and Ecologist Samantha Zwicker in the Amazon was an accident. Frost was in South America on another assignment when he met the duo and saw the footage they’d captured already. Once he made it home and shared it with Lesh, they knew they had to make the documentary.

As viewers enter into the documentary, they’re introduced to Turner. He had enlisted in the British Royal Army just after finishing high school. Admittedly, the crowd he was spending his time with was questionable and he was missing direction. His family had a long lineage of service in the military.

His father sat down with him one day, explaining that when he was looking for a purpose at that age – the Navy gave it to him. “I didn’t really want to join the Navy. I enjoyed running and doing a lot more physical stuff. I don’t think I’d do very well on a submarine. I basically just spoke to my mum one day and was just like, I think I’m going to join the army. And then two days later, we went down to the kind of enlistment center,” Turner explained.

Two days after he turned 18, he was a soldier. Just after he finished his basic training, he was in Afghanistan. “After only five days of being there and seeing somebody get shot in the head, it was definitely an eye opener. I’ll never ever forget that day I was like – this isn’t a game anymore,” he said.

His time in war changed him. When Turner returned to the UK, he found himself drinking heavily and getting into a lot of fights. “It was very hard for me to deal with a lot of things, especially coming back into civilization,” he said. “Either I was going to do something stupid or I really needed a refresher.”

It led him into the jungle.

Every day he was volunteering in the Amazon, Turner committed to ending his life. But by day 14, a sunset on a boat changed everything. He said his eyes were opened to the beauty and magic around him and the two weeks that followed would launch his path of healing.

When he returned to England a few weeks later, Turner was already looking for a way back into the Amazon. “I sold my car, I sold my shoes and my television. I just sold everything they could just to get back to that place,” he shared.

Then came the Ocelots.

The small-sized wildcats would become his reason to get well. “I had to be healthy so that then I could make them healthy. They motivated me to become a better person so that they could become wild again,” he said. “I didn’t understand at that moment what they were to me, but in hindsight, they definitely were my tool for healing and I was their kind of mother to help them heal as well.”

As the documentary begins, we’re introduced to Turner and the Ecologist he worked alongside, Zwicker, a PhD student running the wildlife rescue he was volunteering for. Viewers also get to meet Khan, the first Ocelot rescue. It was his responsibility to raise up the wildcat to be released back into the wild, a first.

Within the first 15 minutes of the film, the wildcat is ultimately killed by a poacher – devastating everyone involved.

The impact on Turner’s wellbeing was detrimental, leading him to once again contimplate suicide. Zwicker is called back to the United States to finish her Thesis, leaving him alone to battle his memories of war and PTSD symptoms. But in the ashes of grief comes another Ocelot, Keanu.

Their journey together will keep you glued to the screen.

As viewers continue the powerful documentary, they’re left to contemplate the importance of nature in its ability to heal. Both directors hope the reflection leads to more. “Just the emotional impression of the power of these places and animals, time with animals or time in nature can be really, really important,” Lesh said. “We should fight for it and we should protect it while doing whatever we can to make sure that this world still has wild places and wild animals left.”

Though seeing the film’s completion was hard for Turner to watch and re-live, he’s finding healing in that experience, too. “I’ve had people come up to me and share how watching it made them want to go to therapy. One massive man even cried on my shoulder telling me it was going to help a lot of people,” he said. “When you hear that from people, it definitely is this beautiful feeling. But at the same time, it’s like, wow, so many people are sad in this world.”

The Amazon may have been the place where Turner found his healing, but it wasn’t always easy living in the jungle. “The cockroaches were everywhere. I’d wake up to have a cup of tea and there’d be a bloody cockroach in my cup,” he laughed.

There were also many infections and parasitic borne illnesses, but he wouldn’t change a moment of it. Recently, he founded a nonprofit, Emerald Arch, dedicated to bringing veterans to the Amazon for healing.

“You don’t really understand what you’re doing at the moment. But you just have to have this kind of inner belief in yourself that what you’re doing at that moment is the right thing to do,” Turner advised. “I didn’t really have any idea what I was doing when I went to the jungle, I just knew that I had to follow my gut instinct. I would say, follow your gut with whatever passion or whatever kind of drive you have. Nothing is really impossible.”

You are not alone! If you or someone you know is struggling with mental health or feelings of suicide, call 988 for immediate help.