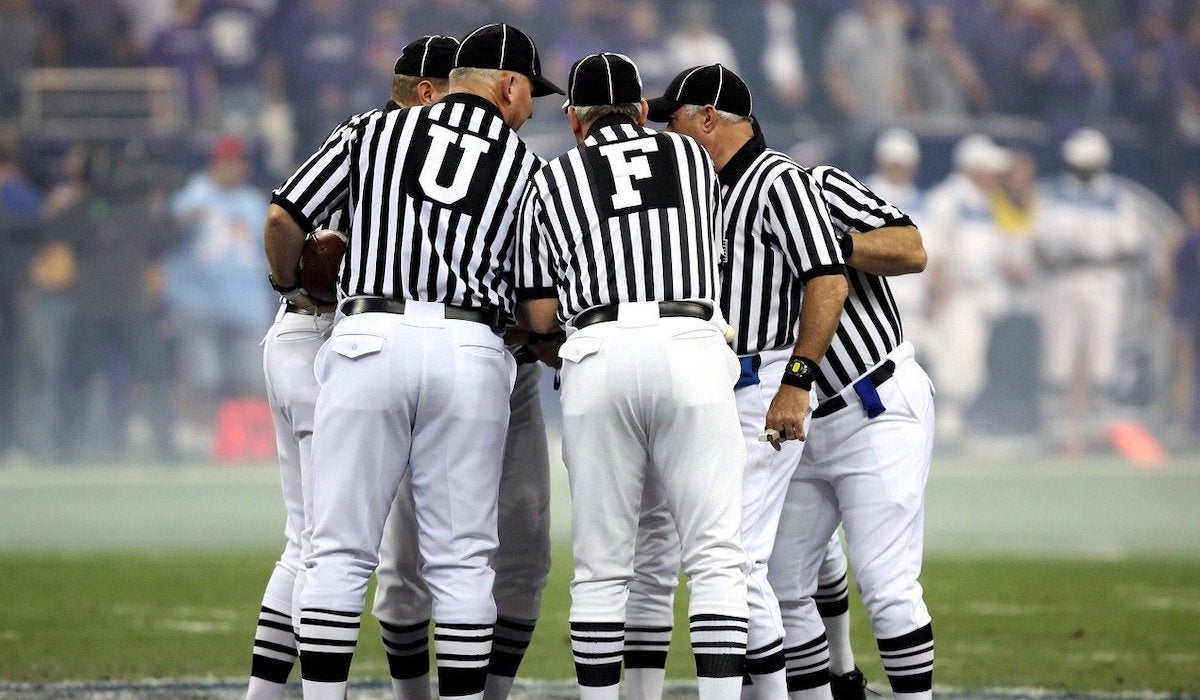 Anyone who’s ever been to a major sporting event can tell you the noise on the field level can be a deafening wall of sound. But communication on the field is important, and everyone involved needs to know how much time is left in the game.

If you need any evidence of this, please refer to any close postseason game ever played.

From the earliest days of American football until as late as 1994, referees on the field used a starter pistol to call the ends of quarters and of games.

When the leagues that became the NFL first started in 1920, there was no official standard for calling plays dead, ending quarters, or any other action taken by an officiating crew. Horns and whistles were used as often as anything else. These were soon standardized to whistles for the plays, pistols for the quarters, and eventually flags to call penalties.

For much of the NFL’s early years, league officials keeping the official time would fire a starting pistol to signal the end of every quarter. The scoreboard clock was not the official game clock. But everyone could hear the crack of the shot and the refs would announce the end of the quarter or game.

There’s no one reason why the league no longer uses the pistol, but suffice to say, it’s unnecessary.

In the NFL as we know it today, after the merger between the American Football League and the National Football League in 1970, the scoreboard became the official game clock – which was the league standard in the AFL (now the AFC).

But though everyone could clearly see the time on the field, the refs still kept firing at the end of the quarter. The officiating crew also keeps the official time as a backup.

As the late 1960s turned into the early 1970s, a wave of aircraft hijackings changed the rules of air travel. Referees were no longer allowed to travel with even a starter pistol, which could not fire live ammunition unless heavily modified. Refs had to borrow the home team’s starting gun.

If the home team didn’t have a starting gun, they didn’t use one, which could lead to confusion on the field. Standardization is as important in football as it is on the battlefield.

Then, there were a series of incidents that wreaked havoc on the players, coaches and even the referees themselves. The sports blog FootballZebras recalled a number of accounts from the biographies of early NFL referees that describe a handful of these events in detail.

One ref used the pistol to silence an angry Bill Belichick. Another accidentally fired the gun while it was still in his back pocket, causing a burn on his posterior. During one game, President Richard Nixon was in attendance and the use of the starting pistol caused extreme anxiety among the judges, who were afraid of Secret Service retaliation.

So while there are many, many good reasons for refs not to fire a gunshot into the air at NFL games, the most important reason is that it’s just not necessary.