My 9/11 story: A Naval Academy plebe on guard - We Are The Mighty

My 9/11 story: A Naval Academy plebe on guard 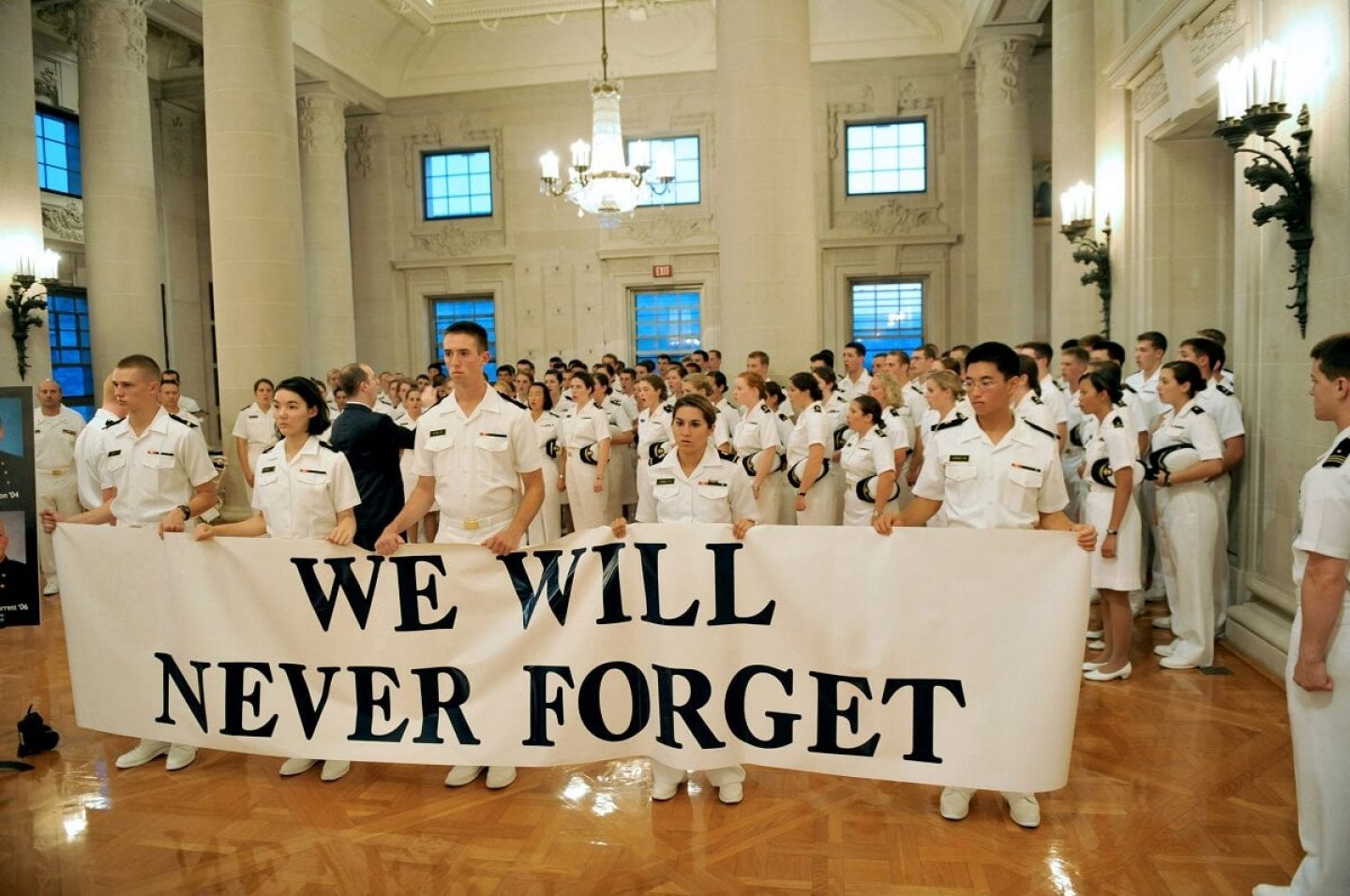 There is nothing funny about one of the most tragic moments in American history. Too many lives were taken that day and many more sacrificed afterwards to allow anything about 9/11 to be personified as a joke. But after 20 years, including 4 deployments, three of which were in combat in Iraq,  I can now look back on that fateful day with some humor. Because in learning to laugh again, we begin to heal.

Today I can laugh at how ill-prepared, young and not-intimidating-at-all that I must have looked in the first hours of the War on Terror. I wish I could tell you I had a family legacy of military service back to the revolution and that I was next in line, but the truth is I joined because of the movie, Independence Day.

The 90s was a time of peace when the biggest threat to our world came from an alien attack that blew up the White House. Thankfully, our planet had Captain Steven Hillard, a cool, suave Marine aviator played by Will Smith who was just as awesome in extraterrestrial dogfights as he was by punching aliens in the face on the ground. I watched Independence Day seven times in the theater and, like Will Smith, I wanted to be the Marine who was ready to act when the time came; that set me on the path to the U.S. Naval Academy.

So in June 2001, I packed my bags and left West Texas. In an eerie fate of hindsight, I had planned to stay a few days with a friend in New Jersey who was also joining the Annapolis class of 2005. We spent our last few days of civilian life driving around, looking for beer or a smoke.  We spent a day in Manhattan, including a visit to the south tower of the World Trade Center. I can still remember the morning sun blazing over us on the observation deck and the fear I had to even look over the edge. It was too high, too scary and too hot for me. I left.

Just 90 days later I was a plebe — a freshman, the lowest of the low. My normal day consisted of a lot of pushups, yelling (mostly at me) and squaring away everything. My socks had to be folded with a smiley face up, left to right, dark to light. My rack had to be tucked in daily with a perfect 45 degree crease in the corners. My uniform had to be perfect from the creases in my shirt right to my gigline. Any infraction was punishable and I was consistently reminded by my leaders that “attention to detail” would one day save lives. In short, discipline made the U.S. military ready for anything.

On Tuesday, September 11, 2001, I woke up at 5 in the morning. Like everyone else, l rushed to get my room and uniform inspection ready before breakfast with the 4,000 or so other midshipmen. We were together in peacetime and would dine together at war. None of us knew it then, and I found myself being screamed at for not having a fresh haircut. I didn’t eat much that morning and as soon as I was released, I ran to the barber shop to fix myself. I waited in line, silent, studying for my chemistry class that would soon begin. The radio in the barber shop played a mix of morning news and classic rock. Then, breaking update, a plane crashed into the World Trade Center. There was shock but not panic. “Not a Navy pilot,” someone laughed. We carried on our lives.

As I sank into the barber’s chair, I noticed the pagers go off, one by one, from those waiting in line. First it was a lieutenant commander, then a Marine captain, then a chief. The pings kept coming down the chain of command. The barber was just finishing shaving the right side of my head, when an announcement came over the loudspeaker – a second plane had hit the World Trade Center; others were missing. The Nation was under attack. All midshipmen were ordered back to their barrack’s rooms.

The barber kicked me out of his chair without finishing and I ran across the campus. Marines with machine guns were rushing to man the gates. When a low flying aircraft came over, we stopped, waiting to see if it would crash into the ground. It all felt like a movie unfolding around me, only this time this wasn’t aliens, it was real.

Inside the barracks was chaos. People were running into each other trying to get back to their rooms while TV screens showed smoldering towers. My roommate from Long Island stood silent, glued to the image before him as the north tower fell before our eyes. “My dad works down there,” he whispered. I thought of the day just a few months before, and how I had just walked away from those towers while so many people were amidst a living hell.

The words of the loudspeaker came on again. The Pentagon was under attack, planes were still missing and we, in Annapolis, were a potential target. We all needed to stay inside and wait. At that moment, a second class, one of the juniors came up to us, baseball bat and golf club in hand. His first question was, “Millsap, what the hell happened to your head?” I remembered that only half my head was shaved and I must have looked like the weirdest Chia pet on the planet. “Nevermind,” he said. He passed me a baseball bat and pointed me to a door and then told me, “You don’t let anyone inside that door without a military ID.”

For the next few hours, I wasn’t Will Smith, but I was a kid with a half-shaved head, a baseball bat in hand and a mission to protect my post. That’s how my war started and I vowed to myself never to get caught off guard again. From that day on, I trained for war.

Chase graduated from the Naval Academy and served three tours in Iraq as a Marine Infantry Officer before joining 19th Special Forces Group as a Green Beret. He learned Arabic, overcome his fear of heights to jump from planes and went to conduct counter-terrorism missions against some of the people who planned the 9/11 attacks. He still gets nervous about unfinished haircuts.