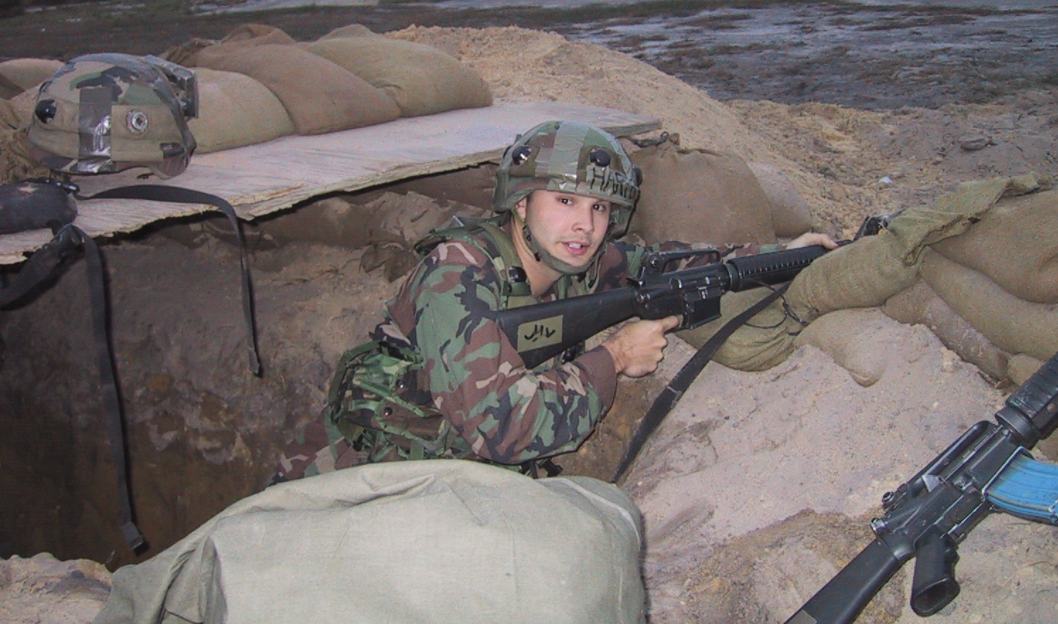 As the son of a Green Beret and part of a family tracing its proud military heritage back to the Revolutionary War, I, for whatever reason, had very little desire to join our armed forces. My view of the military was shaped through the lens of my father, Army Special Forces stationed in Germany at the tail end of the Cold War. Major Dad separated just after I was born, and due to his classified work was short on stories. But what I didn’t glean from his service, was made up for with countless hours of Army Green Beret cadences on cassette in his Trans Am, playing nearly every car ride. But even with all of this, I didn’t really get the military or why people ran and sang about killing stuff. For the record, I can still belt out some pretty amazing Army jodies.

During college admissions my parents divorced, and through an extremely candid and tearful conversation with my mother (where I may have been the one with the tears), she convinced me that an ROTC scholarship would help the family free up money to directly benefit my younger sister and brother for the future. For that alone, I filled out an application for every branch and was awarded an Air Force Type II scholarship for Rensselaer Polytechnic Institute (RPI) to become a Computer Systems Engineer.

This scholarship dictated my school and degree. That wasn’t so thrilling to me, but family came first, and I figured I could gut it out. I showed up to RPI and donned my uniform twice a week and after a grueling year of engineering courses I successfully petitioned the USAF to change my degree to Computer Science with a dual in Video Production. Yay! Something I liked to do.

The next three years flew by and the notion that I would be joining the Air Force became more real. In late 2000, I put my right hand up, received my commission and in early 2001, 2nd Lt Harper stepped foot on Travis Air Force Base as their newest communications officer. I had started warming up to ROTC, finding interest in using video productions to make recruiting and morale videos (where “morale” is defined as poking fun at staff and other cadets). I found my gimmick. And I hoped there was a way to bring this “talent” to active duty.

The moment I stepped foot on Travis AFB was a game changer. ROTC and my limited exposure to the actual military did not provide me a proper introduction into the USAF. I was shocked to learn I was immediately put in charge of a small deployable team of communication specialists whose job was to be dropped into the middle of nowhere, and create the backbone of communications that would allow and expand the footprint into a forward operating base. But it was amazing, and the people were cool and interesting. So were the other officers I met through mandatory fun at the Officer’s Club and other base functions. My job created the opportunity to witness how all the different parts of the Air Force connected. The group my squadron fell under had trappings of it all… pilots, navigators, comms (me), engineering teams to build infrastructure, intelligence shops, medical — our mission was designed to build the beginnings of the bases we would operate out of should anything ever happen. I was really getting into it. I was feeling like a part of a much grander and amazing mission. I was drinking the kool-aid and motivated.

But I sort of forgot, that I had also, in fact, joined a warfighting organization of my own free will.

9/11 started with a phone call from a college friend in NYC at 06:17 a.m. PST. “Do you see what is happening in the city right now?” I hadn’t. The line went dead. I turned on the TV and watched as everything I thought I knew about the world changed before my eyes. Tower Two went down at 06:58 a.m. PST and I was shocked out of my TV coma and realized I was late for work.

I threw my uniform on and raced toward Travis AFB. After four hours sitting in an unmoving line roughly seven miles from GATE #2, I got a call from my boss, Major Smith who said very sadly, “LT, go home, you won’t get on base today. Come back tomorrow, we’re mobilizing.” Click. Uh… what?

The next day LTC Kramer (our squadron commander) held an “all call” and shared with the entire squadron that while we didn’t have concrete intel at this point, we were officially spinning up to deploy. Afterward, he droned on with a few platitudes about how excellent our readiness score was so this shouldn’t be difficult for us. As a hype man his performance was a little lackluster and didn’t do much to clear the room of the awful and palpable anxiety in the air. The LTC then handed the floor to the director of operations and my boss, Maj Smith. The Major was fairly new, arriving just a few weeks before me, but had been in the military for at least 10 years to my 10 months. He was absolutely incensed with rage, his chest heaving, and belted out, “WE DON’T KNOW WHO DID THIS, BUT WE’RE GOING TO HELP KICK THEIR ASS!” That gave about half of us a split chance to cheer so the room half-erupted (some of my colleagues had been training their entire careers for this singular moment). He then started drilling down into specific tasks explaining next steps and parameters for restricted leave. The highlight was we couldn’t go outside of a three-hour radius from the base and everything else was cancelled indefinitely.

One young Airman took this moment to interrupt Maj Smith. “Wait… so major… so I can’t go and visit my mother on Sunday because she lives in San Diego and that’s more than three hours away?!” Without missing a beat, the Master Sergeant in charge of this troop cuts in with “San Diego? Last I checked, San Diego ain’t even open on Sundays. Report to me after this and we’ll get you squared away.” The Airman was in trouble. But that comment sliced through the room, and there was a collective laugh. Maj Smith sensed the tension and recalibrated the remainder of his speech to (correctly) identify that not everyone was as excited about rushing out the door as he was.

I surveyed the room and saw the expressions we were all feeling: fear, anger, anxiety and loss.

Over the course of the next few days half the squadron (around 80 people) deployed. I was too green and was left behind, but I started my training to backfill the team. The deployed group landed at Doha International and then moved forward to build out Seeb Air Base in Oman a few weeks later. I wouldn’t see these men and women for another seven months.

During this timeframe, as the world collectively drew an understanding of what happened and what our new normal was, my nascent understanding of what it meant to serve grew leaps and bounds to the point where I couldn’t imagine any other profession. I was impressed by how hard everyone was working around the clock to support and gear up to replace our deployed teams. It made everyone just want to do a better job, and this terrible but unifying event really galvanized the resolve of so many in the DoD.

I never officially deployed for OPERATION ENDURING FREEDOM or OPERATION IRAQI FREEDOM while at the Air Mobility Operations Squadron, but I would for both at my next duty station at Charleston Air Force Base when I took command of the Video Flight of the 1st Combat Camera Squadron. Those deployments would forever change the way I looked at the world, but those deployments, are stories for a different day.

Mark Harper serves as President & CEO of We Are The Mighty and is raising money for the USO by running the 2021 Boston Marathon. Donate here: https://www.givengain.com/ap/tessa-robinson-raising-funds-for-united-service-organizations-inc-uso-/