30 years later, the Marine Corps AH-1W Super Cobra makes its final flight - We Are The Mighty 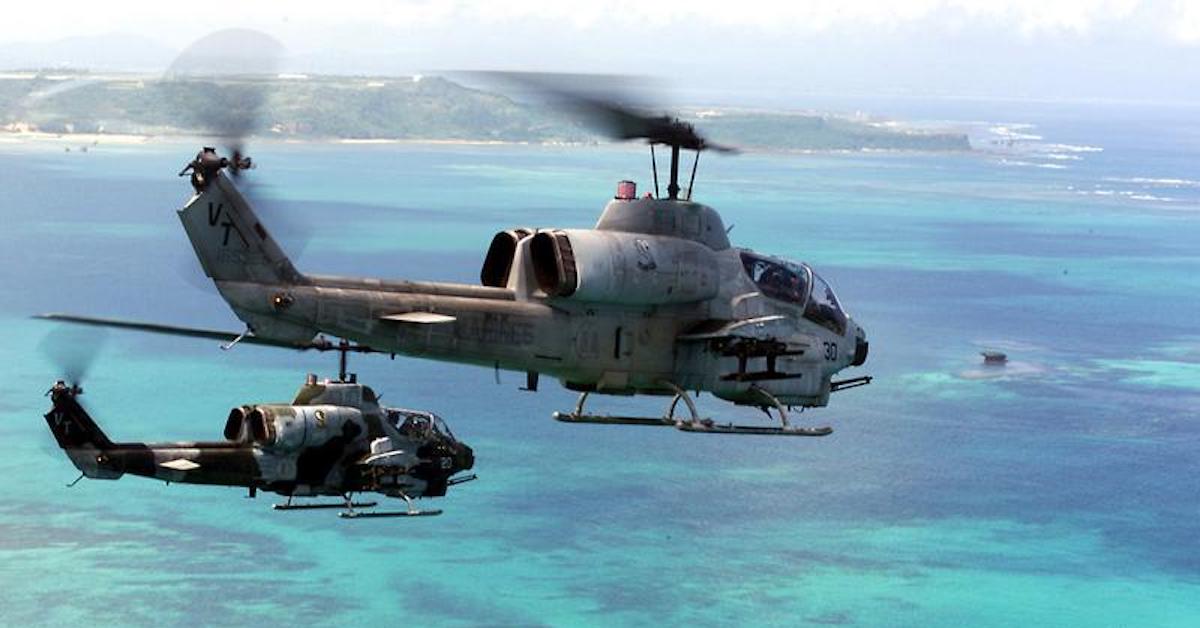 In a video released by Bell Helicopter, Maj. Richardson said that the final flight is very important to aviators as a way to honor the aircraft. He counted it as an honor to be able to fly the last flight.

The dual-blade helicopter was received in 1994. Marines flew it in Afghanistan between 2003 and 2005. The aircraft was also flown in Iraq, Somalia, the Gulf War and with Marine expeditionary units operating on Navy ships worldwide.

This battle-hardened helicopter performed a photo-worthy display over New Orleans in tandem with its successor, the AH-1Z Viper. The last “Whiskey” sortie was performed by the Red Dogs, Detachment A of the Marine Light Attack Helicopter Squadron 772. The Red Dogs are part of the Marine Corps Reserve forces based in New Orleans.

An evolution of aviation for the Marine Corps

The Marine Corps first flew the Super Cobra in Vietnam in 1969. This single-engine aircraft was on loan from the Army. Then, the service introduced the two-engine AH-1J Sea Cobra in 1971. It saw combat at the end of the conflict in Vietnam and participated in Operation Frequent Wind, the evacuation of American diplomatic personnel from Saigon in April 1975. Just a year later, the Marine had the improved Ah-1T version, which helped add precision weapon capabilities with the BGM-71 Tube-Launched, Optically Tracked Wire-Guided (TOW) anti-tank missile.

The Whiskey model, as it’s known today, can trace its origins to the AH-1T+ demonstrator, originally developed for Iran under the Shah. The Iranians wanted an enhanced Ah-1J that could incorporate new engines and the transmission from the Bell Model 214 ST helicopter. But the overthrow of the Shah in 1979 put an end to those ambitions. The T+ variant emerged as a suitable replacement for the Army’s AH-64 Apache after Congress refused to grant funds for a Marine procurement of the A-64.

In 1980, the AH-IT+ made its maiden flight powered by a part of 1,258-shaft-horsepower GE T700-GE-700 engines. By 1983, the helicopter was the de facto prototype for the AH-1W. Besides getting upgraded engines, the AH-1W featured bulged cheek fairings to accommodate electronics associated with TOW missiles. These cheeks were relocated from the tail boom. Enlarged exhaust suppressors helped reduce the AH-1W’s infrared signature.

The Marines placed an order of 44 AH-1W, and the first of them were delivered in March 1986. The final aircraft was delivered in 1999, and its addition made a fleet of 179 AH-1Ws. Retirement is the official end of the AH-1W, but many of the Whiskey frames will fly on as they are remanufactured into updated AH-1Zs.

The AH-1Z Viper has now officially replaced the AH-1W. It began life as a “four-bladed Whiskey” and is now in operation together with the UH-1Y Venom. The AH-1Z has been in Marine Corps service since 2010.

AH-1Ws will continue to serve abroad with Taiwan and Turkey. There’s still a chance that some of the Marine Corps’ fleet will be transferred to a partner ally, which might future extend its illustrious legacy.