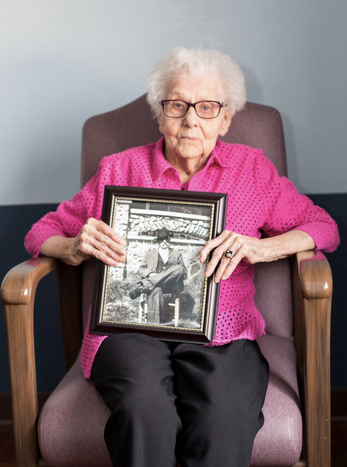 Helen Viola Jackson was 101 when she died on December 16, 2020. Although she led an extraordinary life as a centenarian, she was also the country’s last Civil War widow according to the Sons of Union Veterans of the Civil War.

James Bolin served as a Private in the Union Army, in the 14th Missouri Cavalry with F Company. He enlisted in the Union when he was just 18 years old on April 6, 1865. He married after the war and went on to have a daughter. When Bolin’s wife passed away in 1922 he found himself alone and unwell.

16 years later Jackson was a 17 year-old neighbor of Bolin who would look in on him and take care of him at the insistence of her father. Although 93 years old at the time, Bolin offered to marry her in payment so that she would receive his pension when he passed on. She was one of 10 children living on a farm during the depression era, so times were hard. Jackson agreed and they were married in 1936, although she never told anyone about the marriage. She continued to care for him until his death in 1939 but remained living at home on her family’s farm during her marriage.

She never did claim his Civil War pension and his daughter didn’t list Jackson as his wife after he died either. It is said that his daughter threatened to “ruin her reputation” if she did. Bolin did record the marriage in his personal family bible, which he gave her before he died. She never remarried and no children were born of her union with Bolin. Jackson kept her marriage a secret until 2017 when she began planning her own end of life and was encouraged by a pastor to share her remarkable story. That bible is now a part of a rotating exhibit.

Jackson was featured in the Missouri Cherry Blossom Festival Auxiliary “Our America” magazine for October of 2020. “Mr. Bolin really cared for me,” she said in the interview. “He wanted me to have a future and he was so kind.” She also shared her reasoning for keeping quiet about the marriage, saying that she didn’t want people to think she was taking advantage of Bolin in his older age. Jackson also confirmed that her step-daughter did in fact threaten to ruin her if she told anyone. In 2019 a play called “The Secret Viel” was created about Jackson’s life and performed at the Missouri Cherry Blossom Festival.

To honor the passing of America’s last Civil War widow, the Sons of Union Veterans of the Civil War have draped everything in black. The organization also stated that each brother will wear a black mourning ribbon in Jackson’s honor for 30 days.

Her death signifies the true end to any link to that period of America’s history. It is now truly up to its citizens to remember and share the stories of those who paved the way for the freedoms we enjoy today.