5 military parenting hacks civilians need - We Are The Mighty 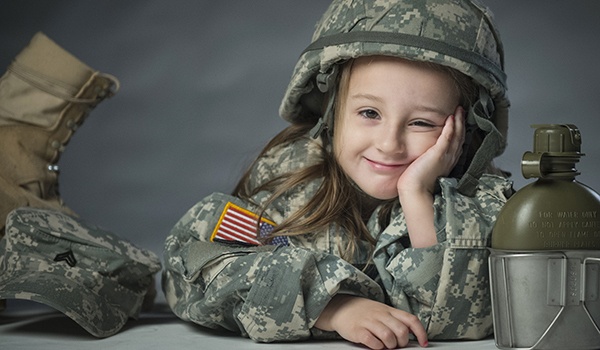 We all know military kids have grit. They are resilient. Gone are the days when the moniker of brat was the norm. These kids kick butt. But clearly, they didn’t get to be this awesome on their own. Along with genetics, military parenting passes down life skills and civilian parents should take notice.

Not only that, military parents start at a disadvantage. We don’t have the luxury of choosing where we live, how much time we spend together as a family, or if making friends at our new duty station will be easy or a string of awkward interactions or being repeatedly ghosted.

However, the byproduct of this lack of choice are parent life hacks that redefine parenting, military style:

1. The art of the cannonball

When you have to jump into friendships, school, new surroundings, etc. – ad nauseum – there is no room for hesitation. You must just take a leap, no matter the water temperature or the distance to the splash. Military parents model what it is to roll with life when plans that were already written in Jell-O change again when new orders are cut.

Military kids are often the new faces on the playground asking, “Wanna play?” As they get older it gets harder, but they still try. They never stop trying. They jump in because they know they’ll have to start the process all over in two to three years.

2. Let it go and embrace the suck

When you grow up without being able to control the world around you, your “normal” changes. Military kids know that “normal” is not a thing. This life lesson is one that all kids – and adults – need to learn. Of course, letting go of control is in no one’s comfort zone. It is ongoing — a choice to make the best of each crappy situation. Because as military kids and parents know, the crap will be closely followed by amazing – new favorite restaurants, friends and places to explore.

Sure, sometimes new is not better, and you find yourself stationed in rural Fallon, Nevada instead of sunny San Diego, California. But just as a cardboard box can be magically transformed into Star Wars X-wing fighter, rocks are actually buried treasure and white walls are blank canvases when presented with a permanent marker – hard is just an opportunity to invent a new perspective.

3. Herd parenting for the win

Because military spouses morph into solo parents during deployments, they are often forced to (begrudgingly) rely upon others. The kindness of strangers at grocery stores, parents who invite kids over for playdates and judgement-free friends who come over, bottle of wine in hand – these things save lives. They also help kids learn that asking for help is okay. Not only is it okay, it is usually more fun. There are also other adults to yell at your kids, so you don’t have to be the bad guy 24/7. Parenting takes a village, but for military families their lifestyle makes a village.

For those who are not from the south, calling someone ma’am or sir is risky. Using these pronouns could be considered an insult if addressed to someone of an insufficient age, and could be wise to avoid.

But the thing about the military is it sends people from all regions of the U.S., mixes them together and orders them to be polite. Respect is part of the culture, even if it is just surface level and mandatory. Military kids can certainly be wild, but they know the consequence of answering a question with “yea” instead of “yes ma’am” outweighs the use of extra syllables.

Well, a lot of it is about them. Older kids have the youthful wisdom to connect news stories about war to what their parents do. Their ears perk up when they hear someone mention the military. They have become such a part of this process that they know when it is NOT about them, but about a greater, larger purpose. Without being told, military kids know that a happy life is not always an easy life. They know what it is to sacrifice and the honor that comes through service. This value placed on service leads many to follow in their parent’s footsteps by joining the military themselves.

Life hacks aside, we know that despite their resilience, military kids have to grow up fast. Many have anxiety, struggle at school as a result of frequent PCS moves and act out when mom/dad is deployed. They have to say goodbye to parents as if it were the last time and worse yet, sometimes it is. Their lives are harder than most and we as parents do our best with what we have.

But sometimes, if we are lucky enough to stumble into solid friendships, awesome duty stations and model optimism more often than not, our kids will rebound from this lifestyle with character birthed from chaos.