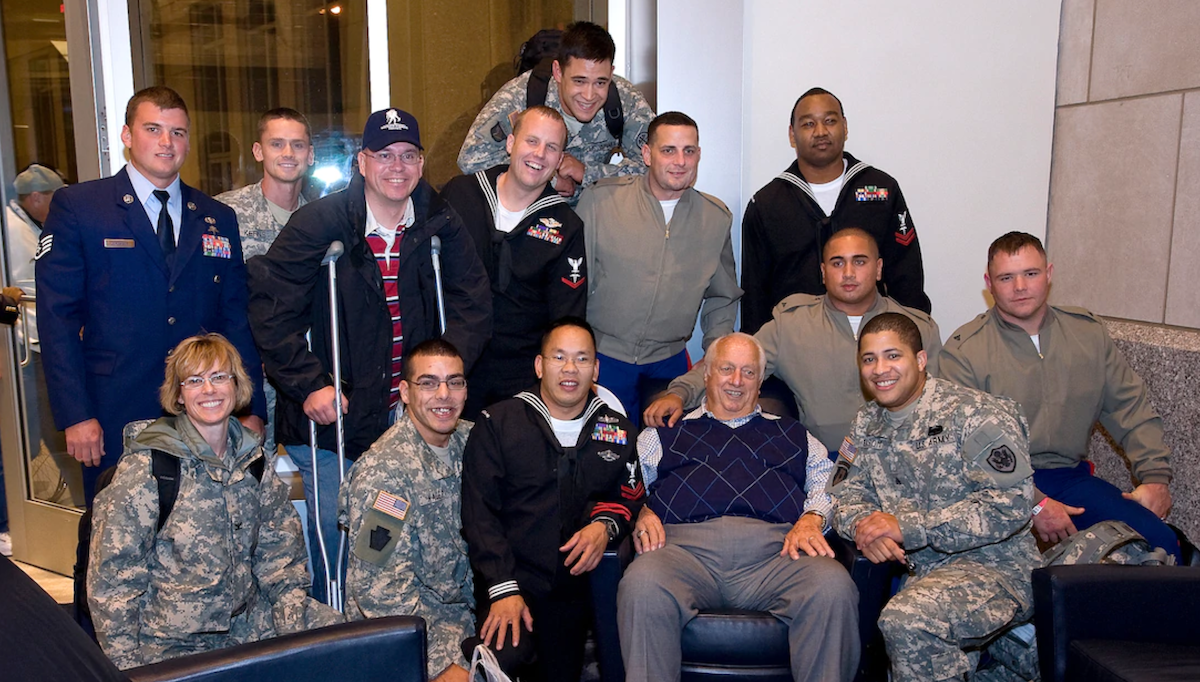 If you’re a Dodgers fan, you know the name Tommy Lasorda. An icon of the team, Lasorda coached the Dodgers from 1973 to 1976 when he took over as manager. He managed the Dodgers from 1976 to 1996 and was still a regular sight at Dodger Stadium from then on. He served as their Vice-President, interim General Manager, Senior Vice-President, and Special Advisor to the Chairman. Lasorda was inducted into the National Baseball Hall of Fame as a manager in 1997. On January 7, 2021, he died of a sudden cardiopulmonary arrest.

Hailing from Norristown, Pennsylvania, Lasorda graduated high school in 1944. He signed as an undrafted free agent with the Philadelphia Phillies the next year and began his professional career with the Concord Weavers in the Class D North Carolina State League. However, he put his baseball career on pause to serve in the military. He served on active duty in the Army from October 1945 to the spring of 1947. During his time in the service, Lasorda was stationed at Ft. Meade, Maryland. As a result, he missed out on the 1946 and 1947 seasons.

Following his Army service, Lasorda returned to baseball. He played for teams like the Schenectady Blue Jays, the Brooklyn Dodgers, the Montreal Royals, the Kansas City Athletics and the New York Yankees. He closed out his playing career in 1960 as the winningest pitcher in the history of the Royals with a record of 107-57. For this, he was inducted into the Canadian Baseball Hall of Fame in 2006.

In 1960, Lasorda was hired as a scout for the Dodgers. He went on to manage in their rookie and minor leagues until 1973. It was then that he was called up to become the third-base coach on the staff of Hall of Fame manager Walter Alston. Though Lasorda was offered several major league managing jobs with other teams, he turned them all down to remain with the Dodgers. In 1976, following Alston’s retirement, Lasorda took up the torch and became the Dodgers manager. During his tenure, he compiled a 1,599-1,439 record as manager, won two World Series championships, four National League pennants, and eight division titles.

Despite officially retiring in 1996, Lasorda managed the U.S. national team at the 2000 Olympics in Sydney and led them to gold. He also coached the 2001 All-Star Game as third-base coach. Lasorda remained active with baseball and the Dodgers scouting, evaluating, and teaching minor league players, advising the Dodgers’ international affiliations, and representing the team in public appearances and speaking engagements. He also visited troops at over 40 military installations around the world and took part in the 2009 USO Goodwill tour for troops in Iraq. “I bleed Dodger blue,” Lasorda famously said, “and when I die, I’m going to the big Dodger in the sky.”