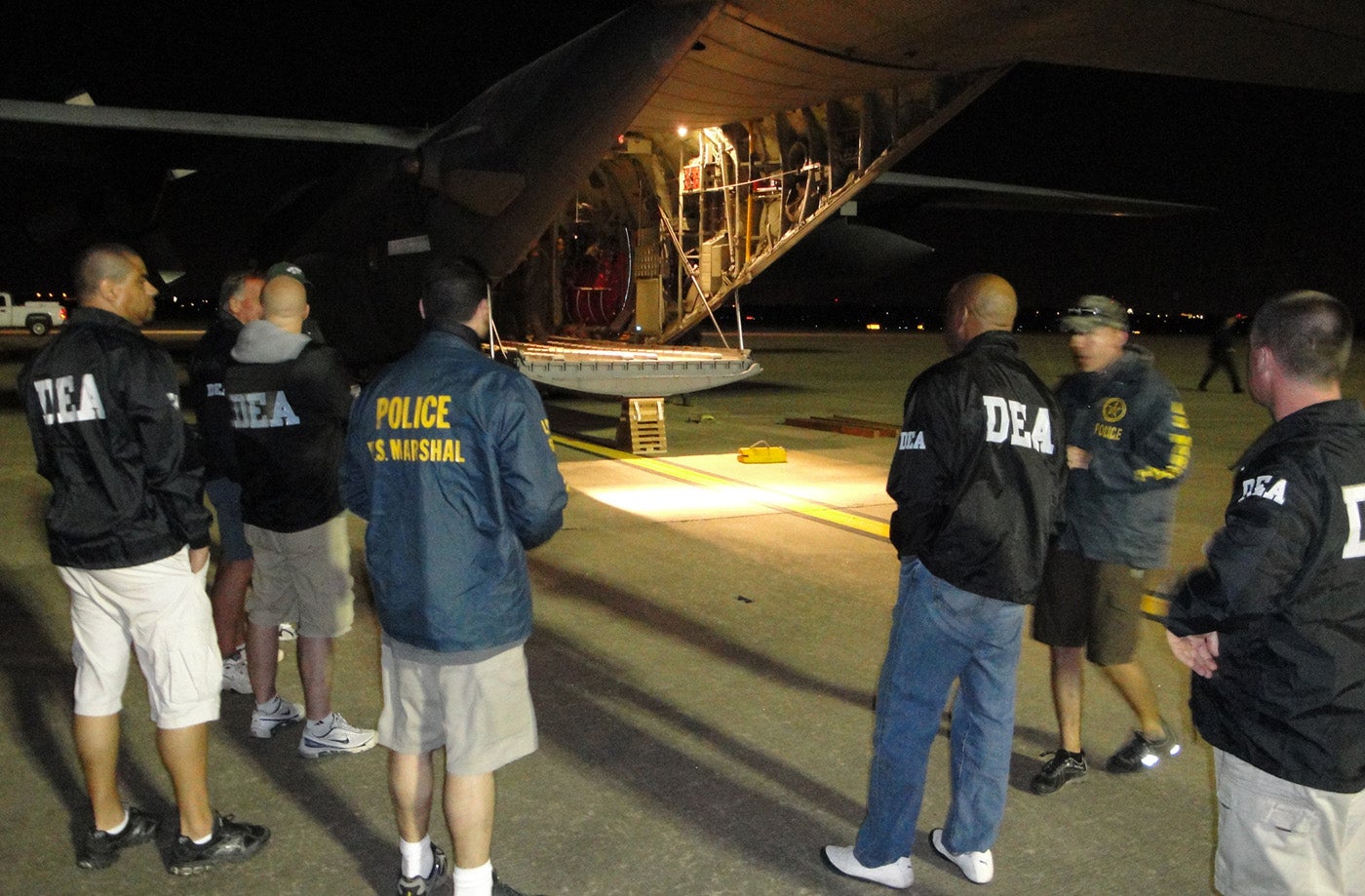 Agents from the U.S. Department of Justice's Drug Enforcement Agency, U.S. Marshall's office and the DOJ's Criminal Division await the offloading of several pallets of seized gold, silver and jewels April 9 in Austin, Texas. The seize assets were part of a joint Panama-U.S. investigation into an international drug money laundering scheme in the Central American country. The Air Force Reserve's 302nd Airlift Wing was charged with flying the seized precious metals and jewels back to the United States from Panama for further processing by Department of Justice agencies. (Courtesy photo/Drug Enforcement Agency).

The Drug Enforcement Administration is the premier law enforcement agency on the front lines fighting the War on Drugs. The mission of the (DEA) is to enforce the controlled substances laws and regulations of the United States and bring to the criminals involved in the growing, manufacture, or distribution of controlled substances appearing in or destined for illicit traffic in the United States.

This Federal Law Enforcement Agency recruits, trains, and deploys America’s elite agents into the world’s harshest environments to combat cartels and disrupt their operations. Due to the dangerous nature of their job, 85 agents have sacrificed their lives in service to the United States. Here are 6 things you didn’t know about these clandestine operators fighting the evils of narco-terrorism.

It was founded by President Richard Nixon

On July 1, 1973, President Nixon merged the Bureau of Narcotics and Dangerous Drugs (BNDD), the Office of Drug Abuse Law Enforcement (ODALE) and over 600 Special Agents from the Customs bureaus into the consolidated force we know today.

They provide oversight of legal drugs too

The Drug Enforcement Administration licenses anyone who prescribes or dispenses drugs. However, the license must be renewed every three years. The DEA has strict rules on prescription authority and record keeping. Prescribing personnel who, in the view of the DEA, abuse their privilege, are subject to the full extent of the law and loss of said license.

To date, over 60 doctors and counting have been charged with pushing opioids and healthcare fraud by the Department of Justice. This greed is the root cause of today’s opioid epidemic exacerbated by secondary and tertiary problems as well.

You can rest assured, when medical professionals behave like drug dealers, the Department of Justice is going to treat them like drug dealers. – Assistant Attorney General Brian Benczkowski

They were trained for combat by the Army

The drug trade also funds actual terrorists in the middle east, and their source of income had to be destroyed. The U.S. expanded its counter-narco mission in Afghanistan in 2005 with the DEA at the helm. The U.S. military provided air support and cargo planes to the DEA, as well as intelligence and logistics support.

Enrique S. Camarena was a Marine

If you’re familiar with the hit Netflix series Narcos, you’ll remember that one of the main characters in season 4 is Enrique S. Camarena, also known as Kiki. The series did not emphasize that he was a U.S. Marine. Oorah.

This special agent was part of the DEA’s Guadalajara Mexican cartel investigation. He was kidnapped and tortured by drug traffickers on February 7, 1985, for over 30 hours. He was also injected with drugs to ensure he remained conscious. He was a tough one, but even Marines aren’t immortal.

In the wake of his death, Operation Leyenda was formed to solve his murder and was the largest homicide investigation ever conducted by the DEA.

Kiki Camarena was posthumously awarded the Administrator’s Award of Honor, the highest award given by the DEA.

They have Spec Ops all over the nation

Special Response Team (SRT) program was created in 2016. The SRT was designed to bridge the gap between tactical operations conducted by field agents and those requiring specialized tactics due to elevated mission risks. SRT operators are highly trained in breaching tactics and an array of weapon systems.

Considered one of the most covert outfits in federal law enforcement, very little is known about DEA SRT capabilities and its operator selection process. – dea.gov

This move is to support federally-sanctioned research in preparation for nationwide legalization — whenever that will be is uncertain.