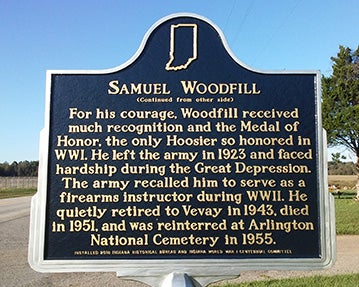 By the time Samuel Woodfill was earning his Medal of Honor in the Meuse-Argonne Offensive in 1917, he was already a veteran of another war. The fighting of World War I just happened to be very different from the fighting he saw in the Philippine-American War. But Woodfill was practically born to be an Army man.

His father was a veteran of the Civil War and Mexican-American War and raised Samule to be an excellent shot with a rifle. By 1901, he was enlisting in the U.S. Army the way his father had 60 years before.

Woodfill was immediately sent to the Philippines with the 11th Infantry in 1901. There, he fought Filipino Insurrectionists in the jungles of the islands for three years before returning to American territory. When World War I broke out, the growing U.S. Army needed its skilled veterans to train and lead the new recruits being sent over to European battlefields.

He deployed with the American Expeditionary Force to France in 1917, still an enlisted non-commissioned officer. But the same need for veterans and leaders that saw Woodfill deploy with the AEF soon saw him promoted to a Lieutenant’s commission. By 1918, almost 17 years to the day he first joined the Army, he was promoted again.

Woodfill was then sent to lead men in the coming Meuse-Argonne Offensive in September 1918. In the second week of the massive offensive, Woodfill and his men found themselves near the French town of Cunel, moving through heavy fog. Despite the fog, they were spotted by German defenders, who opened up on the Americans with heavy machine gun fire.

His men immediately took cover, but Lt. Woodfill did not. He rushed straight at the German defenders, a machine gun nest manned by four enemy soldiers. He shot three of them and, jumping into the enemy position, fought the German officer in hand to hand combat. Woodfill killed the opposing officer too.

Signalling his men to get up and keep moving, they found themselves under fire again from another German machine gun. This time, he ordered his men to advance on the position, which they did. It was overrun and its three-man crew were captured. As they moved forward, they were again shot at by an enemy machine gun.

Charging forward, the American dispatched the third machine gun nest, with Woodfill emptying his rifle and taking down five more Germans. They then entered a German bunker guarded by two more enemy troops. Having spent all his ammunition, Woodfill grabbed a nearby pickaxe and beat the two defenders to death.

Throughout the whole ordeal, Woodfill and his men hadn’t noticed that the air was becoming thick with mustard gas, but they were beginning to feel its effects. He ordered his men to get out of the enemy area and go back to the American lines. The gas was only means of stopping the American advance in the area.

None of his men were killed in the fighting, but the mustard gas knocked Samuel Woodfill out of the war. It took him weeks to recover from its primary effects, but the gas left his lungs permanently scarred for the rest of his life. He was soon awarded the Medal of Honor for his actions near Cunel.

His exploits as a soldier were so legendary, Gen, John J. Pershing, who gave Woodfill his battlefield commission in 1917, called him “The Most Outstanding Soldier of World War I.”

He was even chosen to be one of the pallbearers for the Unknown Soldier of World War I. Though he retired as a Master Sergeant in 1923, at the onset of World War II, the Army recommissioned him as a major and put him in charge of training new troops in Alabama.

His second retirement from the Army came in 1942, after the death of his wife. Samuel Woodfill died nine years later and was interred at Arlington National Cemetery.