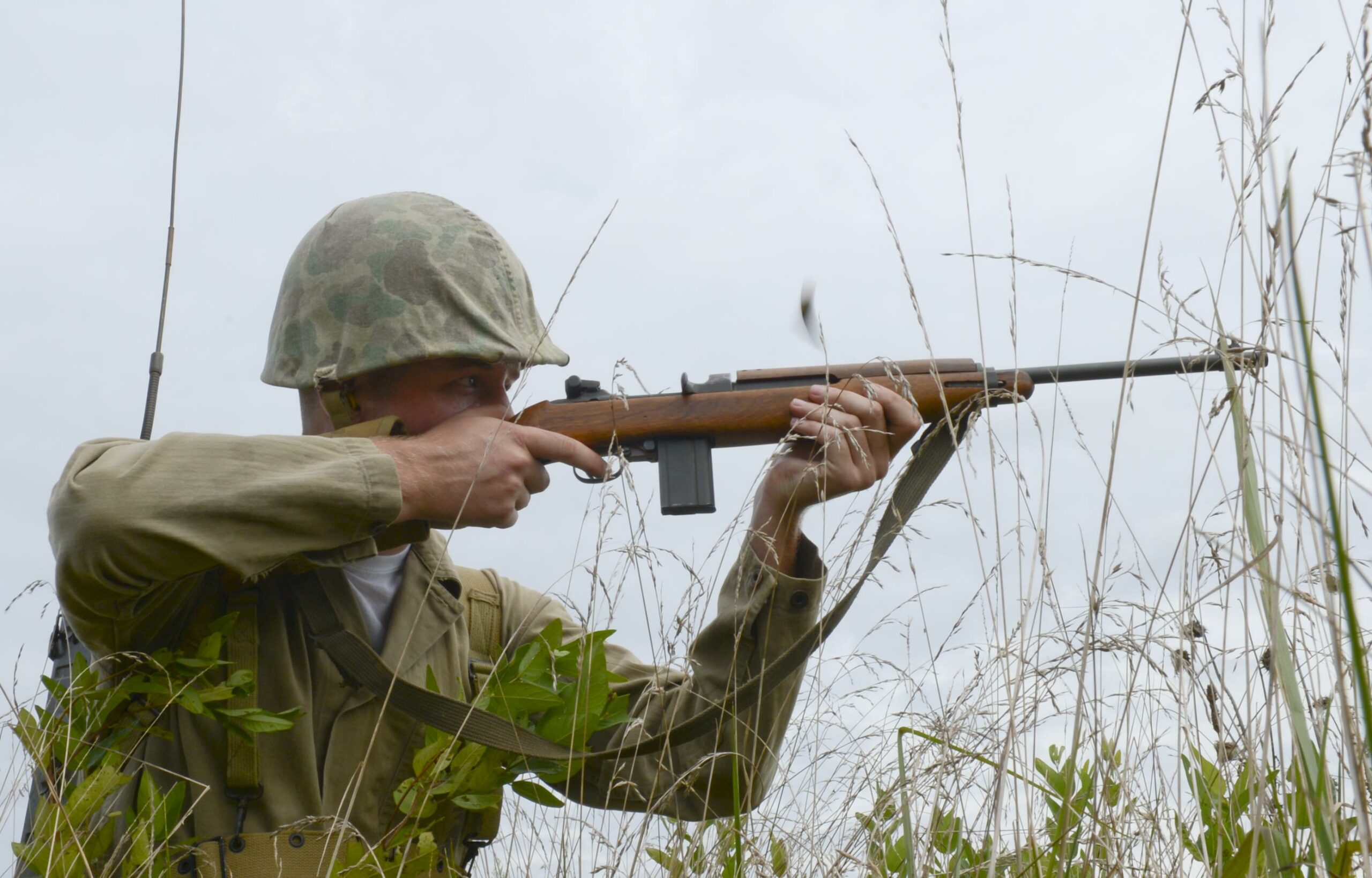 Marines volunteering through the Single Marine Program aboard Marine Corps Base Quantico got a taste of World War II at the Virginia Museum of Military Vehicles on Aug. 17, 2013. The volunteers, wearing World War II-era Marine uniforms, engaged a fixed position with period weapons including an M2 flamethrower.

One of the most decorated soldiers in American history had his big day on Jan. 26, 1945. For three hours, he fought off dozens of advancing Nazi troops, coming at him from three sides. He did it with a field phone, an M2 Browning .50-cal, and his trusty M1 Carbine. General MacArthur called the M1 carbine, “One of the strongest contribution factors in our victory in the Pacific.”

That carbine was a weapon designed just for Army paratroopers in World War II. It had its shortcomings, but its reliability would ensure it would see action in three American wars — and was even a preferred weapon of the enemy. But not many people know the steadfast weapon was designed by a self-taught gunsmith, one-time moonshiner, and convicted felon.

David Williams started making moonshine in North Carolina’s backcountry in 1919. The only problem was the Cumberland County native was good at it — really good. Soon, word spread about the quality of the young man’s whiskey. With the rise of Prohibition in 1920, his elevated status soon became unwanted attention. The very next year, his still was raided by local law enforcement, and a shootout ensued. Williams shot and killed a deputy sheriff.

He was captured, convicted of second-degree murder, and sentenced to 30 years in state prison.

The man who would later earn the nickname “carbine” spent a lot of time in both the prison blacksmith shop, as well as solitary confinement. An inventive tinkerer with no formal training, he spent his time in the box thinking of new ways to improve existing machines — including firearms. He began to make spare parts from scrap metal and wood, which, in turn, earned him more time in the shop. The more time he spent in the shop, the more good he did for himself and society.

It turns out the uneducated tinkerer was exceptionally adept with machine parts. He invented the floating chamber, a mechanism that allowed a larger caliber rifle to fire smaller .22 ammo. While other prisoners were known for building homemade knives, Williams was able to construct rifles from scraps.

He earned an early release in 1929 and returned to his farm, where he constructed a large workshop and began to refine his inventions. Eventually, he was employed by the Winchester Repeating Firearms Company. Just before World War II broke out for the United States, he was able to develop a carbine version of the M1 Garand Rifle.

A carbine is essentially a shorter version of an existing rifle. It’s often lighter in weight and uses a shorter barrel but doesn’t sacrifice much in the way of consistency or accuracy. The M1 carbine, however, was not just a carbine version of the M1 Garand. The two firearms used different ammunition, and the only features they shared were the buttplate and screw. But there was a need for lighter weapons among paratroopers and support crew.

Williams self-designed and built a short-stroke gas piston while in prison and incorporated it into his design for a lighter-weight infantry rifle. In trials, “Carbine” WIlliams’ design proved much more effective and consistent than other gun manufacturers, especially in sandy conditions — an environment that would prove very important to the Marine Corps.

By the end of World War II, the U.S. Military produced more than six million M1 Carbine rifles to use against the Nazis and the Japanese, making it America’s most-produced small arm of the war, edging out the iconic M1 Garand by more than a million units.