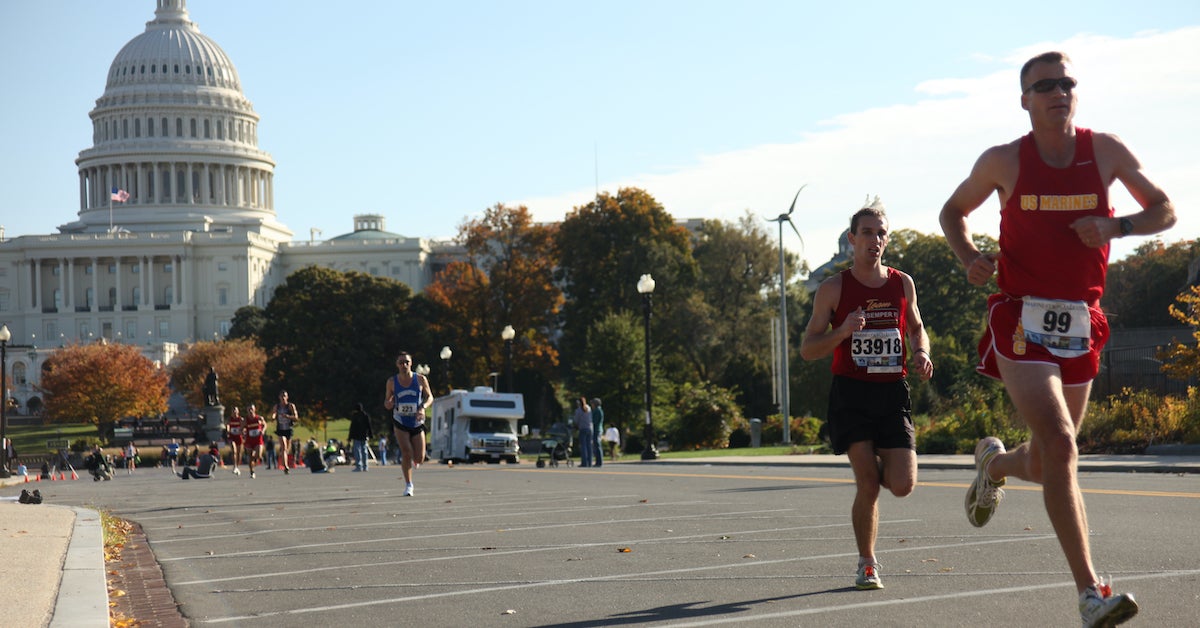 On Iwo Jima’s Red Beach 75 years ago, Marine Pfc. T. Fred Harvey was completely enveloped by war. It was all around him – exploding artillery, grenades, small-arms fire, and mortar rounds coming from all directions.

The 97-year old said that fear is what saved him that day. Originally classed as a Paramarine, Harvey was attached to the 5th Marine Division in the Pacific theater during WWII. He was tasked with handling demolitions. When his unit landed at Iwo Jima, Harvey was injured by two grenades and received the Silver Star for saving the life of a fellow Marine.

In October, Harvey became the oldest Marine to ever complete the Marine Corps marathon – just four days shy of his 97th birthday. He and his team crossed the finish line in a wheelchair. Fear didn’t need to be a motivator to complete the race – just simple pride. Harvey made history by being the oldest participant to complete the rough 26.2-mile race.

Because of COVID, this year’s Marine Corps marathon had to be held virtually instead of hosting its annual race in Washington, D.C. But that didn’t stop Harvey and his team. They set out at 7 in the morning the day of the race from the National Museum of the Pacific War in Fredericksburg, Texas, and finished their version of the marathon around 12:20 in the afternoon. Crowds grew larger each time Harvey took another lap around the museum.

Before competing in October’s race, Harvey had never participated in a marathon. But he said he’s never been afraid of a challenge. In a press release, Harvey acknowledged his team of good friends, all of who are expert runners. “Without their help and my racing chariot, this would never be possible. I’ve traveled the world and accomplished more than I ever imagined, but it will be one of my greatest honors to cross the finish line as a proud U.S. Marine,” he said.

Harvey was accompanied by Glenn Paige, a former anesthesiologist, ambassador for the Navy SEAL Foundation, and the U.S. Naval Academy Blue and Gold Officer and mentor for prospective students. Paige didn’t serve in the military, but his father is a retired Navy commander.

Paige met Harvey at a country club in North Carolina in 2016. Harvey, a former high school athletics coach, was in North Carolina to visit a former athlete. Paige was there celebrating his birthday and received a cake featuring the Marine Corps Marathon emblem, which symbolizes the scene of the flag-raising at Iwo Jima.

Harvey gave Paige a copy of his book, and the two became friends. They’ve spoken by phone every week since then. Initially, Harvey and Paige planned to attend the 2019 Marine Corps marathon, but travel issues prevented the trip. Then Paige had the idea to include Harvey as a marathoner for the 2020 race. He spoke with event organizers who connected him with Ainsley’s Angels, a Virginia-based nonprofit that aims to build awareness about America’s special needs community through inclusion in all aspects of life. Ainsley’s Angels, founded by former Marine, Maj. Kim Rossiter and his wife, Lori, helped Harvey get a wheelchair for the race.

Included on Harvey’s marathon team was Marine Master Gunnery Sgt. Mike Lawrence and Chris Haley, a member of Team Gratitude. Team Gratitude is a Frogman Swim team Paige founded to raise money for the Navy SEAL Foundation. Paige and the team pushed Harvey along a 5.8-mile course several times to equal the distance of a marathon. This year, more than 27,000 people participated in the race worldwide. After completing the race, Harvey was at a loss for words on how to describe the experience. “I’m the guy who couldn’t even pass English so I dropped out of school and joined the Marine Corps,” he joked.

After returning from WWII, Harvey earned both undergraduate and graduate degrees in history. He taught history and PE at various Texas and Colorado schools and coached several sports. Now he lives in an assisted living facility in Texas. Harvey hasn’t decided if he’ll compete in next year’s marathon.