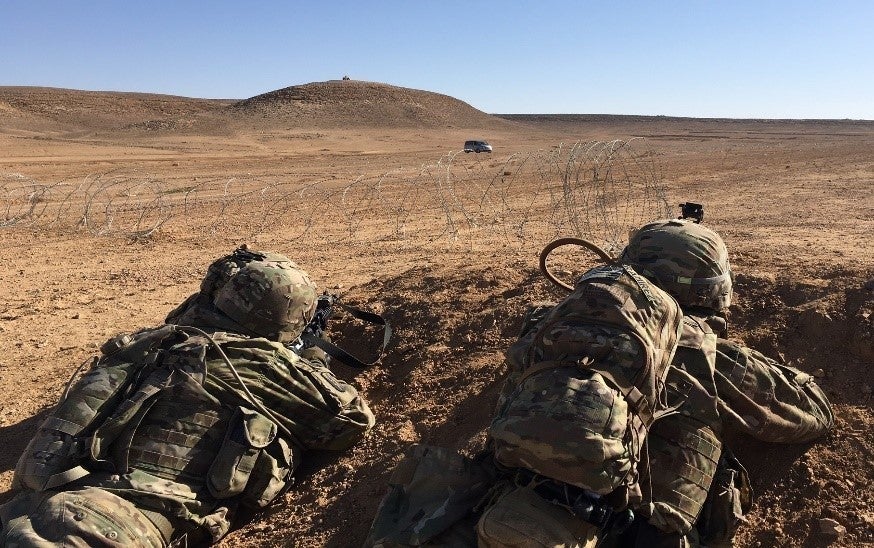 With the conflicts in both Iraq and Afghanistan either drawing down or seeing the United States take a non-combat role, many are looking back to see how the Armed Forces have changed since the days following the Sept. 11, 2001 attacks on New York City and Washington, D.C.

The most revealing data visualization so far has come from USA Today, who created a stunning set of graphs and visuals using 20 years of data from places like the Council on Foreign Relations, the Costs of War Project, the Watson Institute, Brown University and the Stockholm International Peace Research Institute.

What it shows is the unbelievable growth of the U.S. military’s global reach and an incredible amount of military spending. Here are just a few revelations.

1. The U.S. might have 800 military bases around the world

The main visual on USA Today’s in-depth chart shows the growth of the United States’ military bases worldwide, and shows the order in which they opened since the end of the Cold War. In 85 of those countries, the U.S. has conducted counterterrorism operations.

It’s not unusual to see stories and reports from the front lines of fighting in Iraq, Syria and Afghanistan, but USA Today reports that in February 2021, American combat forces were in action in eight total countries that month, far more than the media often report.

It may come as a surprise to many that US troops were also actively engaged in combat in Mali, NIgeria, Somalia, Kenya and Yemen. The United States was also conducting drone or air strikes in Libya and Pakistan while conducting counterterrorism operations with unknown details across Africa, South America and Central and Southeast Asia.

3. Our main geopolitical rival has only one overseas base

The Pentagon says China is building up bases in Pakistan and the Pacific Rim region, which should come as no surprise, given its controversial territorial claims in the South China Sea, but it only has one confirmed foreign military installation – in Djibouti, where the U.S. also operates a military base.

United States forces are not only also in Djibouti, they are also stationed at bases in the eight countries surrounding Djibouti, which may help check the expansion of Chinese influence in Africa – or not.

4. The human cost of decades of war is high

In the 20 years following the September 11 attacks and the resulting Global War On Terrorism, civilians in the affected countries have borne the brunt of the death toll. More than 335,000 civilians have been killed in the fighting.

If we’re keeping score by body count between the belligerents, the terrorists and other extremists have fared the second worst, with more than 259,000 killed. National militaries like those of Iraq and Afghanistan came in third with 177,073 while U.S. Allies have lost 12,468. The United States has seen 7,950 American contractors and 7,104 troops killed in action.

5. The Global War on Terror cost more than $6 trillion

Wars are expensive and the Global War on Terrorism is no different (it’s not over, by the way). The Department of Defense alone has spent some $1.9 trillion to fight it. The Department of Homeland Security has spent at least $1 trillion, the DoD budget has grown by $803 billion in the past 20 years and the cost of taking care of American veterans is running $437 billion.

What’s really staggering is that the second largest expenditure is the estimated interest spent on borrowing the money to pay for the war, which is currently costing the U.S. taxpayer $925 billion.

Despite the advances in battlefield technology and American supremacy due to fighting the war on terror, everything we’ve learned may all be for naught. The newest battlegrounds are not in physical locations, they’re in cyberspace, and the U.S. is taking the brunt of those attacks.

Since 2005, China has targeted American government networks, public networks, and private companies 67 times. Russian and Iran have attacked the US 28 times each and North Korea has targeted U.S. networks 12 times. When extremists attack the United States, the Department of Homeland Security says the source of those attacks are domestic terrorists.

7. The U.S. outspends everyone on defense – by a lot

The budget allotted to the Department of Defense is $731.8 billion, which far outpaces the next 10 countries’ defense budgets. In fact they would all have to band together to spend an equivalent amount to rival U.S. defense spending.

China, India, Russia, Saudi Arabia, France, Germany, the United Kingdom, Japan, South Korea and Brazil together spend as much as the Pentagon every year, just for regular planned operations and development. This spending doesn’t always even account for extra spending allotted by Congress for other, related programs, the Department of Homeland Security or the Department of Veterans Affairs.