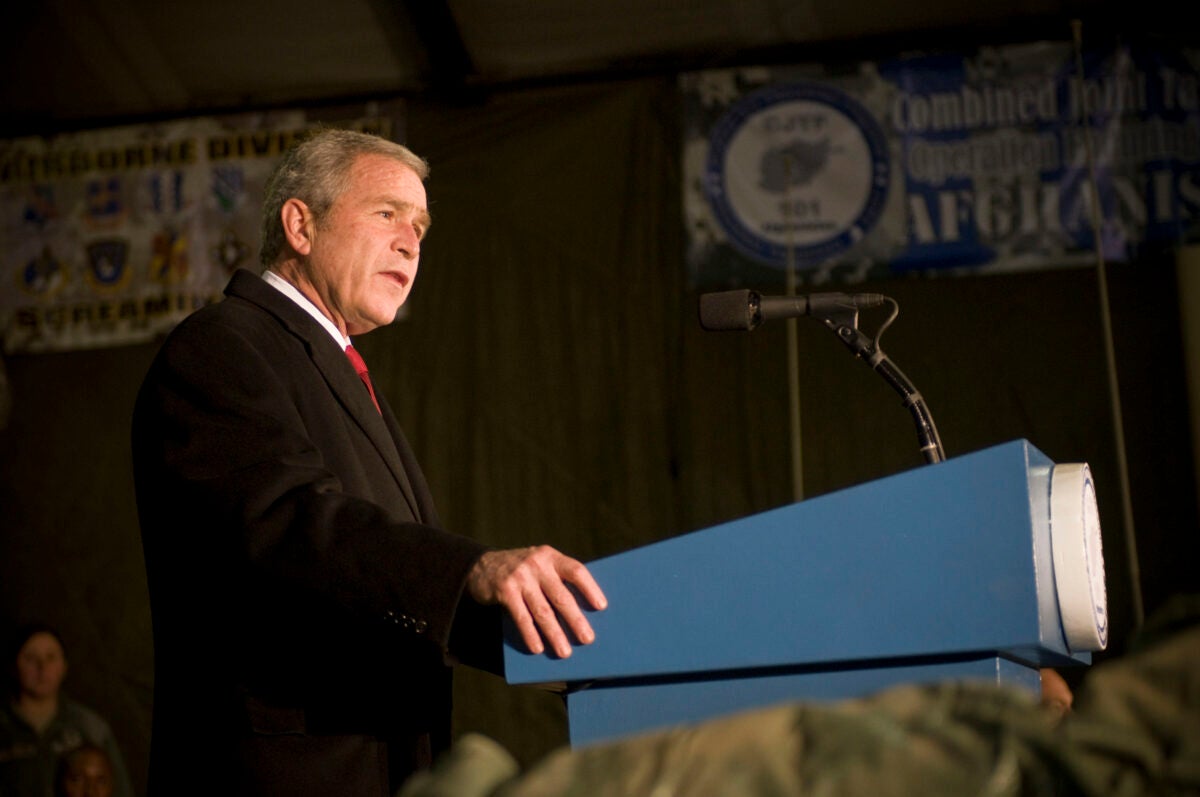 President George W. Bush gives a speech to a crowd of military personnel and civilians gathered at Bagram Air Field, Afghanistan, Dec. 15. On his last tour through Afghanistan, President Bush thanked all the deployed troops for their hard work and dedication. (U.S. Air Force photo by Staff Sgt. Samuel Morse)(Released).

George W. Bush doesn’t believe the United States should withdraw from Afghanistan. As Taliban fighters begin to make huge gains across large swathes of the country and the Afghan government in Kabul looks more and more endangered, Bush told reporters he disagrees with the drawdown.

When asked if he thought the withdrawal was a mistake, the former U.S. president told German broadcaster Deutsche Welle, “I think it is, yeah. Because I think the consequences are going to be unbelievably bad and sad.”

Bush was talking to the German news agency about German Chancellor Angela Merkel’s support for sending German troops into Afghanistan when she came to power in 2005. One of the reasons why Merkel supported the troops, Bush surmised, was because she saw the potential for the growth of women and girls in Afghanistan.

Now, the former president believes the progress made by women in the country may soon be all for naught.

“I’m afraid Afghan women and girls are going to suffer unspeakable harm,” he said. Bush also discussed his concern for translators and other supporters along with the families who aided U.S. and NATO troops in Afghanistan. “They’re just going to be left behind to be slaughtered by these very brutal people, and it breaks my heart.”

When the U.S. drawdown began in earnest in May 2021, there were 1,100 German troops left, along with forces from 36 other partner countries.

Bush can look back on the U.S. invasion of Afghanistan, which was launched under his order in October 2001 over the Taliban government’s refusal to extradite Osama bin Laden in the wake of the September 11th terror attacks.

While the current administration remains bizarrely optimistic in many ways about the survival of the U.S.-backed government of Afghan President Ashraf Ghani, the Taliban keep gaining ground.

In the beginning of July, the Taliban had been gaining ground at a furious pace, sometimes unopposed. The Long War Journal keeps a regular weekly time-lapse map of how many of Afghanistan’s 407 districts fall to the Islamist terror group. The first week of July saw the group capture an astonishing 10% of the country in just six days.

Despite the facts on the ground, President Joe Biden denied the Taliban are on track to take over the country, giving a speech at the White House that kept with the message that the Afghan government could hold its own.

“The likelihood that there’s going to be a Taliban overrunning everything and owning the whole country is highly unlikely.”

Biden’s assessment doesn’t jive with those of Gen. Austin Miller, the war’s final commanding general, or those of the U.S. intelligence community, who believe the Afghan government could fall in as little as six weeks after foreign troops completely withdraw.

Former President George W. Bush had long been known not to publicly criticize successive presidents, keeping mum during the Obama and Trump administrations. Biden said he even consulted with Presidents Bush and Obama. Obama called it the right thing to do but Bush remained concerned with maintaining the progress made in the country.

Upon hearing President Bush’s concerns, critics were quick to criticize Bush and his handling of the war’s early years, which some believe led to the Taliban’s enduring staying power and eventual resurgence.