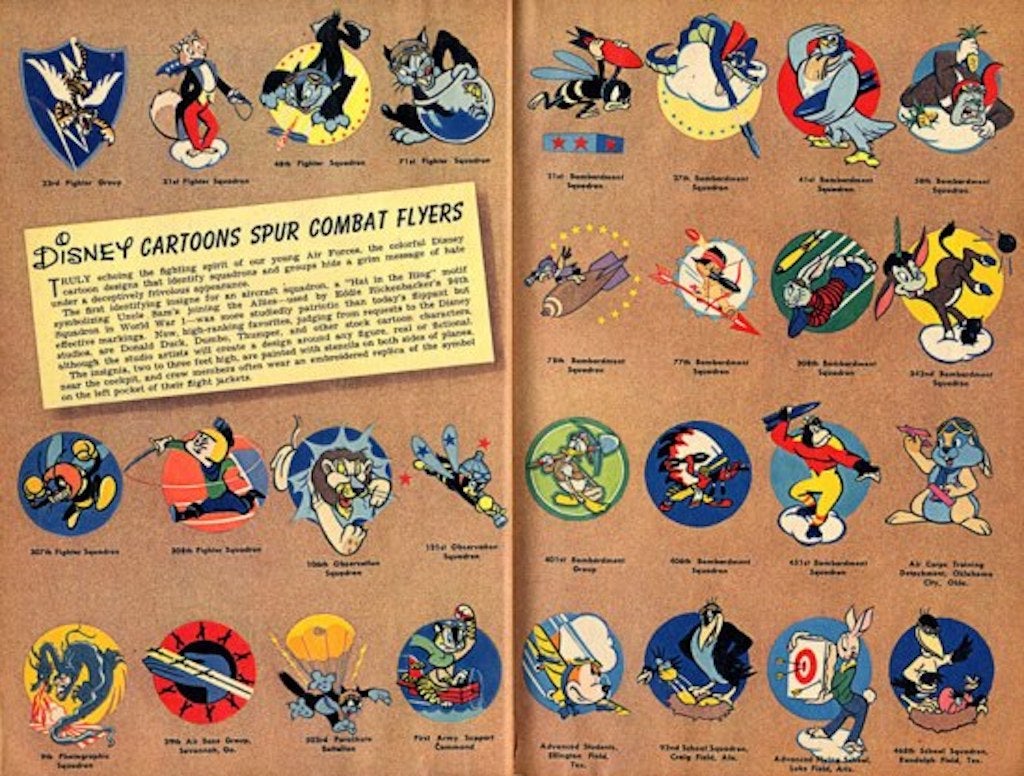 Spread from the April 1944 edition of “Scientific American” showing some of the most popular Disney-designed insignia. (Division of Armed Forces History).

World War II impacted nearly every aspect of American society, from the types of meals consumed to the culture influenced by the silver screen. For the first time in history, every American banded together on an industrial scale focused on a unified effort towards victory. Every conceivable mode of entertainment took a turn for the better. In the real sense, creatives and writers had become actual constituents of the war effort. Long before the bombing of Pearl Harbor, the possibility of another world war began to creep into the American consciousness. Stories written by several authors during that era reflect the growing anxiety about the war and how it would impact American lives. Tiny tremors preceding the earthquake to come.

Immediately after the Japanese sneak attack on Pearl Harbor, Disney and the Government began talks on how the Mouse can defend the homeland. The U.S. Army subsequently commandeered Walt Disney Studios for their use, but rooms were not the only resource Disney could offer the troops. The government assigned Walt Disney himself a very important task; to create military training films. Disney Studios aided the war effort by enlisting Mickey Mouse and several other prominent role players. Several military training films were aired by Disney in the early 1940s, providing education concerning the war to millions of Americans. Disney, along with other government initiatives, educated and invigorated Americans to promote the war effort. Museum exhibits show a series of posters aimed at teaching children the value of preserving stamps for war bonds.

Walt Disney wanted to support his country in all ways possible, and this portrayed his loyalty, patriotism and honor to the Americans. He literally threw every resource he had toward the war effort to ensure the soldiers in the frontline never lacked. In one of his interviews, Walt stated that all the works dedicated to the war effort were done at cost, and no profits were expected. He didn’t want to profit from the war, while soldiers were risking their lives on the battlefield. Upon hearing this, Americans loved the Mickey Mouse show and others related to Walt Disney even more.

In addition, protective masks were issued to the residents of Hawaii after the attack. Children’s protective masks were specially made with an image of Mickey Mouse to make them more appealing. Approximately one thousand Mickey Mouse masks were manufactured during World War II. Even though Mickey mouse did not physically fight on the battlefield, the initiative by Walt Disney Studios made a positive impact during the devastating era.

Participating in the war effort was more than enough for most wartime writers and people in the entertainment industry. However, Mickey Mouse was just a mere representation of how the entertainment industry joined hands to support the US Military. Cartooning was, in many ways, the best method of talking about the war. During the WWII era, most Americans had grown up watching Mickey Mouse and other famous Disney Cartoons. Therefore, Walt Disney found it the best and simplest way to convey messages to Americans. While the laws of physics were never applied to these cartoons, they certainly helped viewers to perceive the hardships of wartime.

As the war progressed, the cartoon business developed, and the armed forces provided a breeding ground for some incredible talent. It was a win-win situation for the US government and the cartoon film companies. More men joined the army to support their country, and the filming industry gained more popularity. The government and the entertainment industry coexisted so well during this period that it seems farfetched to the uninitiated how important cartoons were welded to the machines of war.