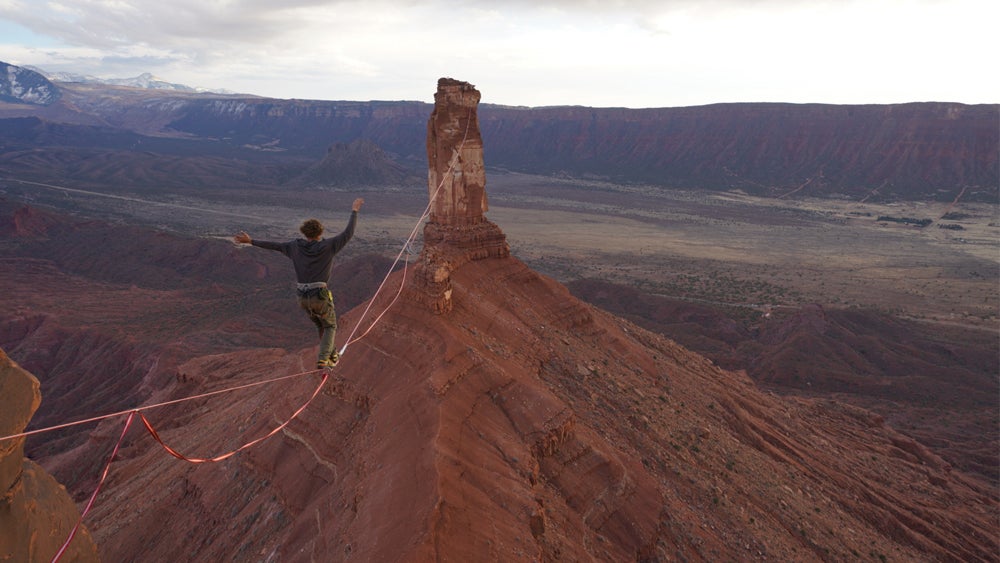 Spencer Seabrooke is a Pro Slackliner and a cast member of Discovery’s new TV series PUSHING THE LINE, streaming on discovery+. Spencer is originally from the small town of Peterborough, Ontario. Growing up he spent his free time skateboarding, snowboarding, playing paintball and bridge jumping. At the age of 18 he founded a concrete finishing company. Always on the lookout for adventure, he searched for the next challenge to conquer.

What first attracted you to this sport?

I started rock climbing and whenever I got to the top I felt like it was missing something. I watched a movie about one of the other cast members on the show, Andy, and he had been highlining for a few years. He held a handful of the world records. I watched him and got super inspired by what he was doing. So, I went out and started doing it.

What was your scariest moment practicing the sport?

When you’re first starting, you learn to trust your gear. You’re looking back at all the knots that you’ve tied and the connections you’ve made. You look down and you see how far you’re going to fall if you mess one of those up. In the beginning, I feel like my fear was high at the night, but over time and the experience rigging, it slowly becomes more comfortable.

In the show you all refer to yourselves as a ‘dysfunctional but working’ family. How long have ya’ll known each other?

The sport of slacklining has been growing a lot in the last five years. It has been skyrocketing. It was [around that time] when we all started. We’ve been in it long enough and have done a lot of projects together. So, we kind of make a deal to get together once a year and do some rad stuff and catch up. That way we can stay at our top level. It really is like a family. When you’re rigging one of these lines and someone gets on the radio to say, ‘It’s okay for you to get on, everything is good here,’ your life is in another’s hands. You learn to trust each other.

What advice would you give to a veteran who wanted to try the sport out?

What was your favorite moment during the filming of the show?

Everything that we did was a lot of fun! I can’t ruin the show so you’re just going to have to tune-in! Watch the good stuff. I’d say the kilometer long zipline was my favorite part (laughs).

What is next for you?

For me, we’re keeping it local here in Canada. I’m trying to grow my own business, SlacklifeBC — we sell slackline products. We’re out to help the community here and teach everybody how to do it. So, tune-in! The show is premiering tomorrow, June 5th, on Discovery+! It’s really cool because I grew up watching the Discovery channel and it’s the kind of thing you watch and get stoked to go do something. It’s great that I’m going to be a part of it all now with the others. The audience will be able to get off their butts and go do it! (laughs)