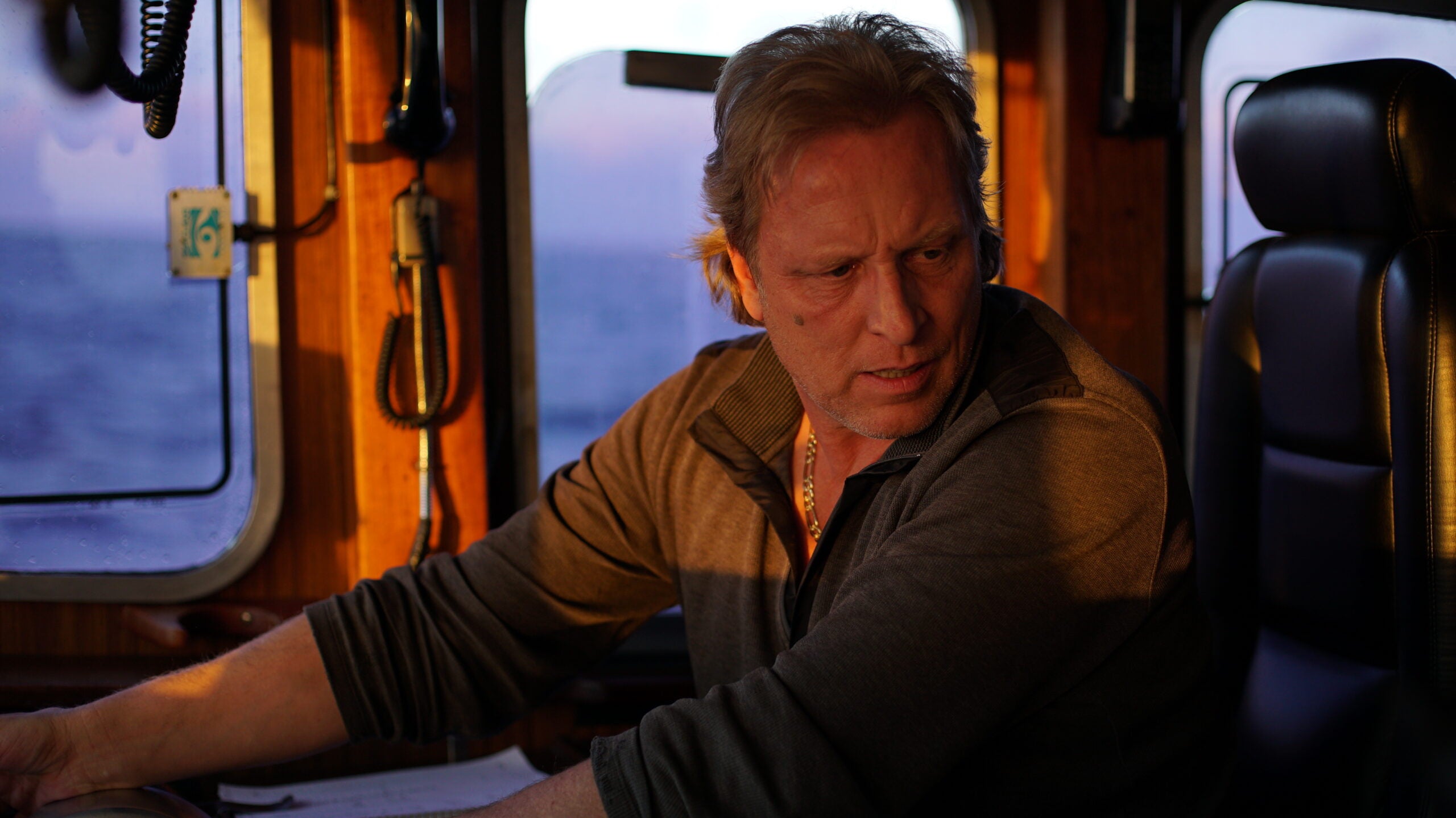 The son of a Norwegian fisherman, Sig began fishing at age 14. His father Sverre came from a long line of fishermen and was one of the first pioneers of the crab industry in Alaska. While still in high school, Sig joined his father aboard the family boat, and also had the opportunity to fish in Norwegian waters in the summers. After finishing high school, Sig took up fishing full time, and at the young age of 22, earned the position of relief captain on the Northwestern.

Four years later, he became the boat’s full-time captain and one of the youngest ever to take command. Sig has made a name for himself as a hard-charging captain who doesn’t suffer fools or disloyalty lightly.

From his earliest years at the Northwestern’s helm, Sig has known his position in the captain’s chair depends completely on results. If you can’t bring home the catch, you go back to being a deckhand. In his role as the Hansen patriarch, Sig remains fiercely protective of his top-producing operation, his reputation and his crew.

WATM: Deadliest Catch is very popular in the veteran community. I remember starting to watch back in season 4 at the barracks with my squad. Does having many veteran fans surprise you?

When [WATM] said we have a lot of veteran viewers, it didn’t surprise me. We’ve received so many emails and information coming back to us from [active duty] troops. We can’t tell you how many people in the military would give praise to the show. There is a common denominator, maybe it is from them being gone and us being gone at sea. No matter what it was, they appreciate us. Shared experiences. It’s mind boggling. It is really flattering.

WATM: Mother nature is truly calling the shots this season, from the dangers on the high seas to the air we breathe, how has your experience as a captain helped prepare you for the toughest season yet?

With the pandemic and everything, it was difficult because you’re dealing with an unknown — multiple unknowns. Unknowns such as protocol, how to deal with illness if someone did become ill, protocols from the town of Dutch Harbor – they had their own protocols. Then you had protocols with the fishing tanneries that take our product. All the products, codfish and crab. The trip to get to anchorage, Alaska and Dutch Harbor, there were protocols there. All that and we didn’t even know if there was going to be a season to be had.

We didn’t have a survey this last summer. That’s when they go out and survey the ocean bottom and see roughly how much crab is out there and we take a conservative number so we don’t over fish. That wasn’t done. So, we had to go by a few years prior with an educated guess. We were fortunate that they opened the doors so that we could go fish and feed families. Of course, in the process there is so many people involved that people don’t understand. By the time it gets to the end user, all these people that are employed from shipping to sales – everything involved. There is a lot riding on it. Boats were pressed whether they should even fish or not. Even if they could get up there to do that it was difficult, getting the lines thrown and all.

WATM: Half of the fleet is tied up in Seattle. Has the virus infected that many crews or are they just cautious?

They were tied up because they didn’t know if there was going to be a season, so, you’re not sure if you should pay your premiums on things like insurance [for your ship and crew] such as personal injury. You have things like the journey itself to Dutch Harbor, which has a fuel cost. We had the possibility of a government shut down that some [reconsidered] if they should even leave.

We were also at risk because if we didn’t get the survey — if we didn’t produce crab — and we didn’t make this happen we were adding to the risk of the next season. Its never about just this year. You always want to perform so its good for next year too. They have what is called a Catch Per Unit. It is the average of how well you are fishing from every pot and how much crab you are getting. We’re a very sustainable industry so we want to make sure there is enough on the table for next year. Had we had a government shutdown; we were going to be looking at a minimum two year shut down. It’s industry protocol, it’s called a rebuilding act. It shuts down and you’re done for the next two years. So it was critical that we were out there even if it was the most minute amount of pounds to catch as long as it was open. A lot of hurdles. When you finally do get the news that they’re going to open then you need a crew. I called Jonathan and brought the Time Bandit into play. The reason for that is the more the merrier. We need to cover these grounds. We need to get it done because we didn’t have that survey to go by. When you have it you can kind of tell where they are and how they’re schooled up in the summer months. It gives you an idea of how you want to start the ball game. You need more people.

Working together is not very common these days. We as fishermen are very competitive and lookout for ourselves. We haven’t done it in a while and we tried to work together. (laughs) It’s not the prettiest thing to do because fishermen are natural born liars when they’re out there! You can’t trust any of them. Me included – but! We managed get through that as well.

WATM: You started fishing with your family when you were in high school. How did your father prepare you to become a captain and how are you preparing your daughter who is following in your footsteps?

Well, the way I prepare my daughter is the complete opposite of the way I was prepared by my father. That’s apples and oranges. When I was a kid, the first time I was on a crab boat, I was 12 years old. Every summer from there I would participate by fishing for Blue King Crab, Gold Fin Salmon. In the Bering Sea, or if we went to Norway as a family, I would have a job over there to fish for cod or mackerel or herring. I was always busy in the summer. Mandy, chip off the ol’ block, when she was 13 she participated in what is called Salmon Tendering Season. The North Western is like a big fish taxi. All the small salmon boats will deliver their catch to us and we’ll transport the fish to the beach at the processor. We would stay out there and be productive and busy. She was a really young gal, fishing ever since. We have common ground there, [as far as] growing up.

When I was 22 [becoming captain] wasn’t really an intended thing. It sort of just happened. One captain said he was going home and it was late in the season. The crew asked my father if I could run the boat. They didn’t want to see another old guy, someone they didn’t know. Because it was such a family run operation [my father] asked me and I agreed. I just went out there and winged it, honestly. I paid attention to my father and the other captains that had been running the boat. Until you do it, there’s a big learning curve. My learning curve was at the peril of the crew. I didn’t know anything, I didn’t know what I was doing. We still managed to get through it and there was much more crab in those days.

Now fast forward to Mandy, she was the youngest female to ever fish in the Bering Sea during the winter months – that I know of.

She missed out on school, I mean, I remember her asking, ‘Could I come up there?’ and I remember saying, ‘But you’re 17 years old?’ I knew that – at least from what I thought was – you can’t just miss [school] quarterly. I didn’t realize it. I said, ‘Sure, when you’re done with school you can come up’. Then I get a call from my wife saying I put my foot in my mouth because she’s coming up next week. I said, ‘She’s got school!’ and she said, ‘No, you ding-a-ling, because she can make up those lost days.’ I had no idea. So, next thing I know, my foot is in my mouth and Mandy is up there. When you look back it’s intensive. She was aspiring to do this and you can’t stop a person like that. You can’t put the breaks on good people that have that drive. After that, I couldn’t bear watching her grow unchecked anymore. If she’s going to be the next captain then that’s amazing!

I tried to fast track her first and training her on a one on one basis instead of throwing her to the wolves…which is what my father did to me. Like, he would tell me he would go out with me but then he would stay in town and I would go out and the mission was number one. He would say, ‘Just follow Walter. He said he’s got you.’ When we got out there, she told me to set my gear and then I was out on my own. (laughs) There is too much money to be doing that these days. With her, it was a little bit of a fast track. I would rather have her more knowledgeable and equipped to run the family business when that time comes. Everyone understands that off the boat. It’s pretty unique the way we started so far.

WATM: Veterans love shows with adventure and a hint of danger. What would you like to say to the military audience regarding the show?

Well, number one, we appreciate them for what they do and being a part of the audience. I think we’re very much alike. There is risk and reward across the board and that’s a common denominator. We appreciate them as much as they appreciate us. It feels like family and its really neat thing to see that.

Deadliest Catch is now on Discovery and is streaming now on discovery+.