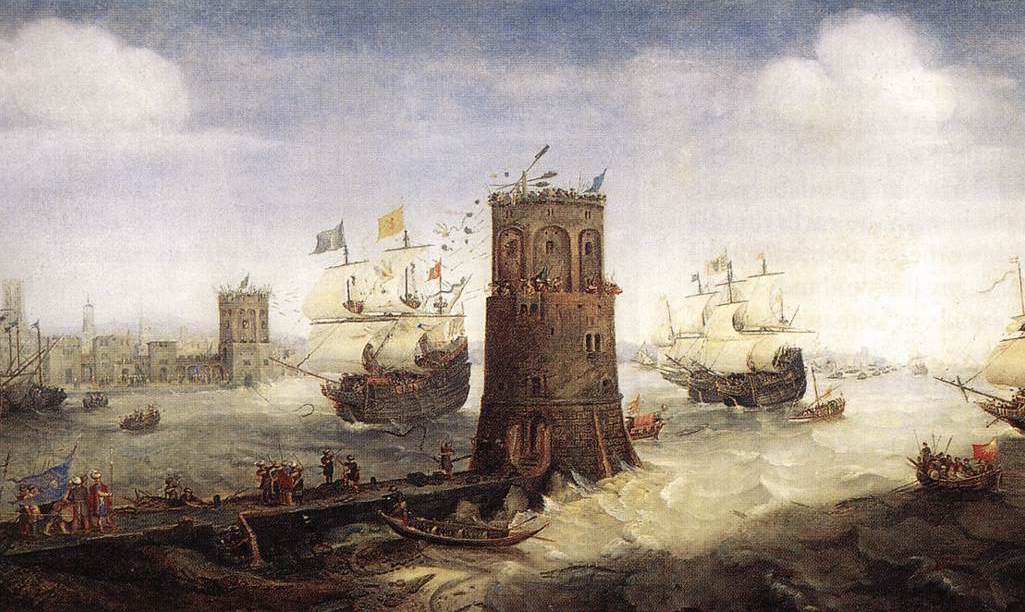 Crusaders attack the tower of Damietta in a painting by Cornelis Claesz van Wieringen.

The Crusades usually calls to mind European knights duking it out with Islamic warriors in long and protracted series of battles over control of the Holy Land. No doubt we think of Medieval kings like Richard the Lionheart leading the Catholic Church’s call to arms as Christian troops swarm the Middle East. While that image is mostly true, there was at least one occasion where the king wasn’t leading Europe’s deadliest warriors. When King Louis IX was captured by the enemy, his wife, Margaret of Provence, took command of the Christian armies.

Margaret was born in France in 1221, and as she grew older, rumors of her beauty and piety began to spread. Eventually, those rumors reached the court of King Louis IX and a marriage treaty was soon negotiated. She was crowned Queen of France at age 13, and the arrange couple actually hit it off.

They hit it off so well that when Pope Innocent IV called for a Holy Crusade against the Muslims in Egypt, Margaret accompanied her husband to battle. It turned out to be a really good thing for the Christian Army, because Margaret turned out to be a much better military planner than Louis.

The Holy City of Jerusalem changed hands numerous times since the First Crusade in 1096. Crusaders first captured the city in 1099. By 1187, it was once again under Muslim control. It wasn’t until the Sixth Crusade of 1227 that Europe regained Jerusalem, but it wasn’t some grand battle. Holy Roman Emperor Frederick II caught the Ayyubid leader Al-Kamil in the middle of a civil war, and Al-Kamil just gave the city to him.

In 1244, the city fell to the Muslims once more and the Pope called for the Seventh Crusade. It was led by King Louis IX of France and his reportedly beautiful wife, Margaret. Louis was on a mission to wage a real Holy War, recover relics, and bring it all back to Europe. In 1248, the king left Paris, bound for Egypt.

He finally arrived in Egypt the next year, surprising the Muslims by capturing Diametta. The defending Arabs were so shocked at this success that they offered to trade the city for Jerusalem, but Louis IX refused to negotiate with a Muslim. He probably should have. His next victory at the Battle of Mansurah saw him win a Pyrrhic victory, costly for his army in terms of men and skilled commanders.

Then, the Islamic Army captured the European supply ships and the Europeans began to starve and die of disease. By the time Louis was ready to negotiate, the Sultan knew he was at a loss and refused to hear his terms. At the 1250 Battle of Fariskur, the entire Crusader force was soundly beaten and 15,000 troops were killed or taken prisoner, including Louis himself.

Meanwhile, Margaret was still in Diametta, where she learned that not only had her husband been captured by the enemy, but also that she was now in command. After ordering her guards to kill her if the Arabs captured the city, she organized the logistics of providing food for the Christians occupying the city. When Italian defenders of Diametta tried to leave their posts, it was Margaret who convinced them to stay, covering the cost herself.

With the city’s morale flying high, she also organized her husband’s ransom, a million bezants (gold coins) and surrender of the Diametta. Margaret did all of this while pregnant, and delivered the baby three days after the surrender of the city. By May 12, the king and his family were safely in Acre.

Under King Louis’ command once more, some of the defenders of Diametta were left behind. Once the ships were gone and the ransom bargain complete, the Muslims slaughtered them.