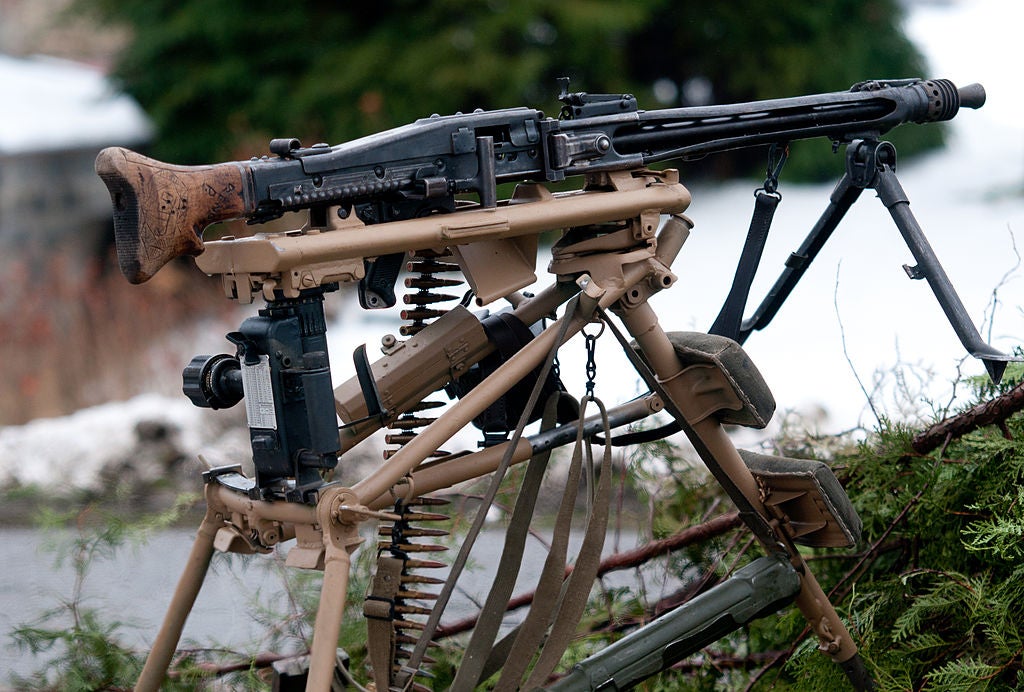 There’s a reason Germany’s enemies called the MG42 “Hitler’s Buzzsaw.” The MG42 could fire 1,200 rounds per minute, twice the rate of the M1919 Browning Machine Gun and it did it with a unique sound that let the enemies of Nazi Germany know exactly what they were facing – and it was enough to make anyone think twice about an assault.

When Germany began to rearm following World War I, it began to apply a lot of lessons learned in the Great War for the future battles it knew were likely to come. One of the upgrades it began to make wasn’t correcting a problem, it was perfecting an already-great weapon of war.

The German MG13 was an air-cooled version of the German Army’s Dreyse machine gun that had seen so much success in the trenches between 1914 and 1918. But the MG13 was a more versatile machine gun, as it could switch between semi-automatic and automatic just buy pulling a different part of the double crescent trigger.

Germany wanted a machine gun based on the MG13 that could easily be transformed into a heavy weapon for any purpose. The MG34 was based on the MG13, but was designed to be adaptable for use on the battlefield, against troops, vehicles, aircraft or anything else that might need a lot of lead fired at it in a hurry.

As a result, the MG34 became the first machine gun designed for general purpose use in combat. It could be used against infantry masses or to return fire against aircraft but also had the ability to be used as a high-powered sniper rifle. The version fielded by the Germans in World War II was even more versatile than its descendants.

MG34s that American and British GIs faced in combat features a quick-change barrel and metallic link ammunition belts or 50-round drums. This gave the MG34 the ability to fire sustained streams of bullets for longer than its Allied counterparts while being lighter and easier to carry.

It could also be mounted almost anywhere, from bipods and tripods that were carried with machine gun crews to mounts on panzer tanks and other vehicles in the Nazi German arsenal. There’s a reason the MG34 is so synonymous an icon of the German Army and Axis forces in World War II Europe.

There were drawbacks to even such a thoughtfully engineered machine gun, however. The versatility it enjoyed also made it a very complex weapon and its action was difficult to keep clean. This was particularly difficult for German soldiers because the weapon became susceptible to common field conditions, especially those on the Eastern Front, where fighting was cold, dirty, and particularly brutal.

MG34s were extremely susceptible to extreme weather conditions and were made nearly useless by dirt and mud, both of which featured heavily in the combat of World War II. The German Army was able fix the jamming issues caused by some of the original designs. As the fighting began in earnest in 1941, the German Army was fielding versions of the MG34 that used a simplified action, simplified replaceable parts and used the weapon’s recoil as part of the roller locking system. That simplified version was cheaper and more effective and was the weapon that U.S. troops fought against by the time they arrived in Europe and North Africa.