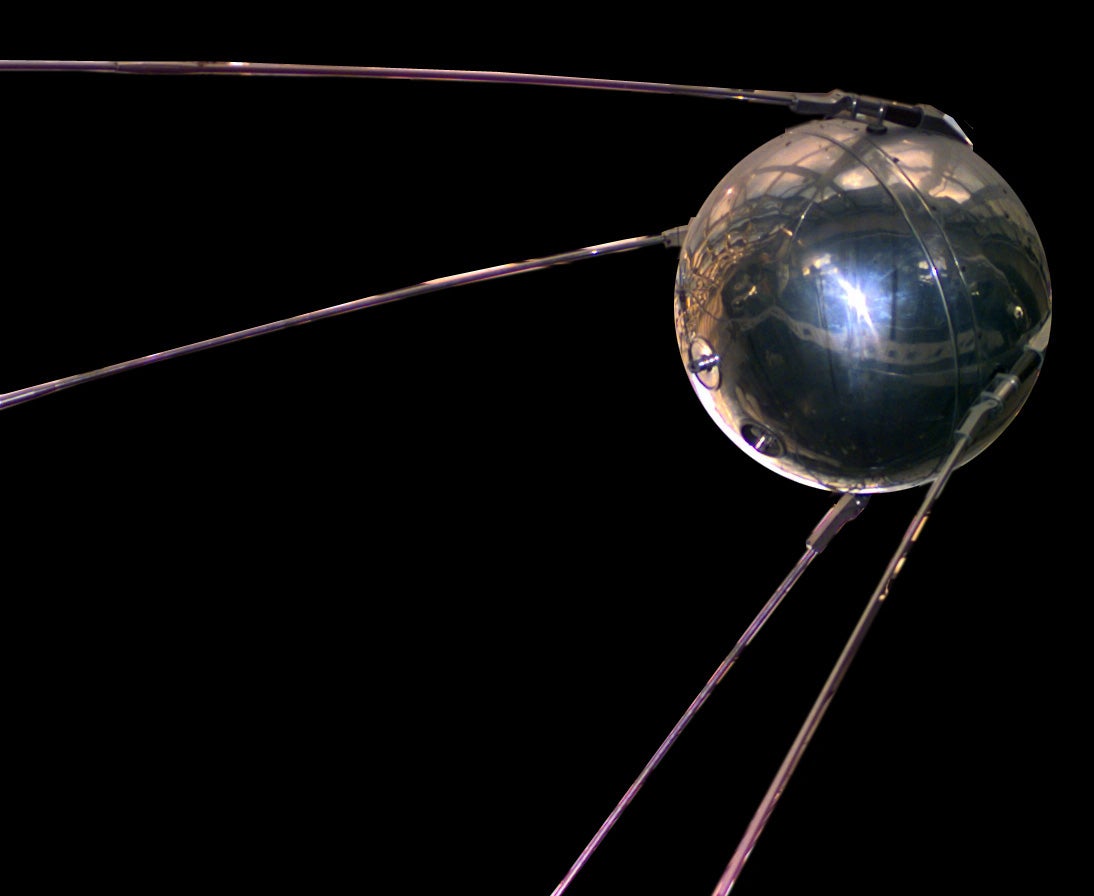 A replica of Sputnik 1. (National Air and Space Museum).

The U.S. doubled its efforts into space exploration and research, launching its own satellite in 1958. The Space Race was on, but after his election as the next president, John F. Kennedy changed everything. In a 1961 joint session of Congress, he challenged the country with the goal of putting a man on the moon by the end of the decade.

NASA, the U.S. military, and everyone else involved with the quest to put a man on the moon, as we know, achieved the dream in July 1969. In retrospect, it may seem like a foregone conclusion that the U.S. would win the Space Race, but at the time, winning was anything but certain. The USSR made a number of notable achievements in space expiration during the 1960s (and later).

It was the Soviet Union that put the first probe on the moon in 1959. It was followed by the first animals in space in 1960 and the first man in space, Yuri Gagarin, in 1961. In 1963, Soviet cosmonaut Valentina Tereshkova became the first woman in space. By 1965, they made the first spacewalk.

In 1968, while the Apollo Program in the United States was still preparing to send a crew of astronauts out of low-earth orbit – the first time human would leave orbit – the Soviets were setting another milestone for their space program: they were about to send the Zond 5 satellite into orbit – the moon’s orbit. It was also carrying tortoises, fruit fly eggs, and plants and bacteria aboard to study the effects of space travel on lesser creatures.

The whole Zond 5 project was shrouded in secrecy by the Soviets because the first three attempts all ended in disaster, killing a number of personnel on the ground during rocket and takeoff explosions. The fifth Zond mission was actually supposed to be a human-crewed spacecraft, but concerns about another explosion led the Soviets to use animals instead. But the effort, though it has a few hiccups, was a success.

Soviet ships picked up the capsule that made a successful reentry in the Indian Ocean, and retrieved its passengers, all of which were alive. The space travel had little effect on any of them after just six days in space. The Zond 5 didn’t actually orbit the moon, but it did circle it. In the West, however, it had a big impact. This wasn’t because of the moon-oriented mission, but instead the result of a clever prank made on NASA by three Soviet cosmonauts.

On Sept. 19, the voices of cosmonauts Valery Bykovsky, Vitaly Sevastyanov and Pavel Popovich were intercepted by NASA and the CIA. The source of the transmissions was the Earth’s moon. It sent American officials and astronauts into a tizzy. NASA had no idea how close the Soviets were (or actually, weren’t) to making a moon landing and the sound of three cosmonauts coming from the moon, discussing landing telemetry, made the Americans’ heads spin. Even President Lyndon B. Johnson called NASA to ask why Popovich was reporting from the moon.

The truth was that the USSR knew they wouldn’t beat the Americans to the moon, so they decided to have some fun with them instead. Popovich asked Soviet engineers to link to the pod while it was circling the moon. As it rounded the moon, Popvich bounced transmissions from the Zond-5 and back to earth, “Flight is normal… we are approaching the surface.” He knew the Americans would receive the transmissions. He called it “a little bit of hooliganism.”