The U.S. military is getting a nuclear-powered space vehicle - We Are The Mighty

The U.S. military is getting a nuclear-powered space vehicle 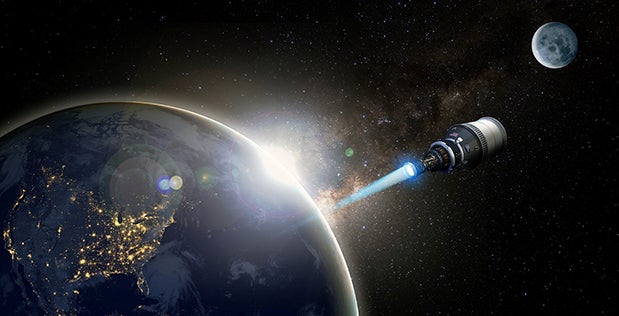 A nuclear thermal propulsion system meant to operate in low Earth orbit may sound like the stuff of the future, but the future will come much sooner than most of us expect.

The Defense Advanced Research Projects Agency (better known by its acronym, DARPA)  just announced three companies will be designing America’s most futuristic engine – and it’s expected to be operational by 2025.

This engine is not known by its acronym, DRACO, which stands for Demonstration Rocket for Agile Cislunar Operations. DARPA says the three big contractors designing over the next four years will be General Atomics, Blue Origin and Lockheed Martin.

DRACO is not only advanced because the propulsion system will be the first of its kind, it’s also advanced because electric and chemical systems don’t give current technology anything close to the kind of maneuverability we’ve come to expect from space vehicles that don’t actually exist, like X-Wing fighters and Federation Runabouts.

Designers aren’t exactly thinking that the new system will give any space vehicle the kind of handling current air fighters enjoy, but it’s fun to think about what the future may hold. Military planners are hoping for any kind of advanced agility in orbit, something that offers the best of the chemical and electric propulsion currently used by orbiting vehicles.

“The performer teams have demonstrated capabilities to develop and deploy advanced reactor, propulsion, and spacecraft systems,” Maj. Nathan Greiner, the project’s Air Force program manager, said in a statement. “The NTP technology we seek to develop and demonstrate under the DRACO program aims to be foundational to future operations in space.”

The first phase is (appropriately) the foundational phase of the design plan. General Atomics will develop the system’s reactor and propulsion mechanics. The other two companies will build off of that design and each create a concept for a spacecraft.

This won’t be the first time The United States has conceived the idea of a nuclear-powered engine in space. In 1961, NASA built nuclear reactors for use in rocket engines with its Nuclear Engine for Rocket Vehicle Application (NERVA).

Then-Director for NASA’s Marshall Space Flight Center conceived the idea of manned missions to Mars using spacecraft powered by three NERVA engines each, eight years before man landed on the moon. The proposed mission was supposed to embark in 1981 and land on Mars by 1982. Instead it was scrapped in 1972.

DARPA’s nuclear thermal rocket system will use fission to heat liquid hydrogen and fire that heated element in its gaseous from the rear of the rocket. As it expands through a nozzle, it will create thrust in space.

If you’re worried about the possibility of an exploding rocket filled with radioactive elements spewing those elements all over the Earth, you’re not alone. But scientists assure us that nuclear thermal rockets will use low-enriched uranium, which would not be usable as a weapon if that happens.

They also assure us that the uranium used in the propulsion system won’t be radioactive until the rocket is well clear of Earth’s atmosphere.

Right now, DRACO rockets are being considered for transit between the Earth and its moon, but it would significantly cut down on travel times inside the solar system, potentially reaching Mars in as little as three months.