The Army dropped the Chevy Colorado-based ISV from the sky 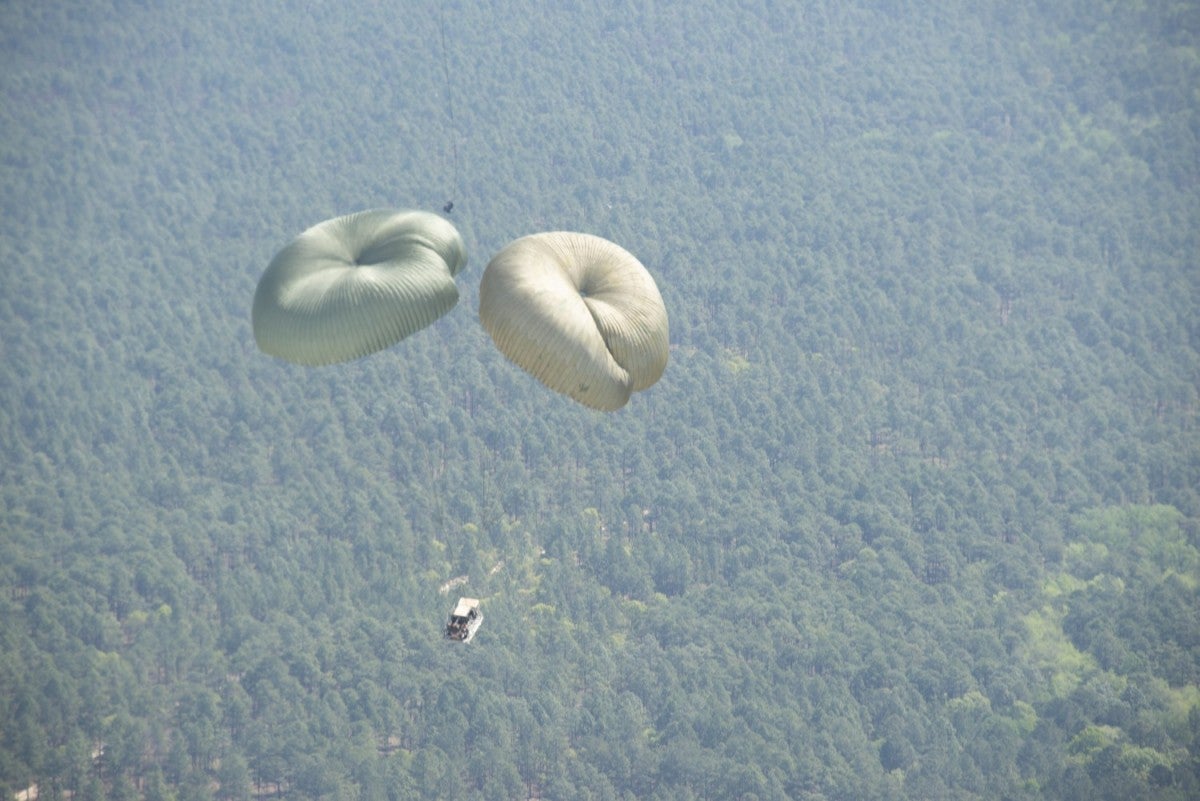 In June 2020, the Army selected the GM submission for the new Infantry Squad Vehicle. The $214 million contract calls for 649 to be delivered to the Army over a five-year period. Based on the Chevrolet Colorado ZR2, the ISV is designed to provide rapid and organic transportation to light infantry units. Naturally, the best unit to test the ISV is America’s Airborne.

The 82nd Airborne Division is tasked with being the nation’s Immediate Response Force. Along with an airlift from the Air Force, the IRF is designed around rapidly deploying a Brigade Combat Team anywhere around the world within 18 hours of notification. The lightweight ISV is ideally suited for this role. In order to test this capability, the 82nd had to drop it from a plane.

2-325 Infantry Battalion, 2nd Brigade Combat Team worked with the Airborne and Special Operations Test Directorate to conduct the ISV’s airdrop certification. The ISV was delivered by standard low-velocity from a C-130 and C-17 as well as by a standard dual-row airdrop system from a C-17. Upon landing, paratroopers de-rigged the ISV, loaded their rucks on its roof, and drove it over smooth and rough terrain. “Operational testing is an opportunity for test units to train hard while having the opportunity to offer their feedback to improve Army equipment,” Maj. Cam Jordan, executive officer at ABNSOTD, said. Testing was conducted on the Holland and Sicily Drop Zones at Fort Bragg from March through June 2021.

The ISV will enhance the mobility and lethality of the light infantry. “The ISV will be a game changer for a rifle squad,” Jordan said. “The ability to drop this in with the soldiers will give them much greater reach and endurance to complete their mission.” The Colorado-based vehicle can carry all nine soldiers in a squad and their individual combat loads.

Moreover, the ISV utilizes 70% off-the-shelf components from its commercial variant. This makes it easier for an infantry squad to operate and maintain.

“This vehicle will work well as a means of rapid insertions for an Infantry squad into all types of terrain, including urban environment,” Spc. Brice T. Dunahue, after testing the ISV, said. “The similarities to civilian vehicles will ensure training is fluid and in emergency situations can be operated by any solider.”

The 5,000-pound ISV is also designed to be sling loaded under a UH-60 Blackhawk or flown inside a CH-47 Chinook. As testing continues and the Army takes delivery of more vehicles, the ISV will roll its way into the motor pools of infantry units across the force.