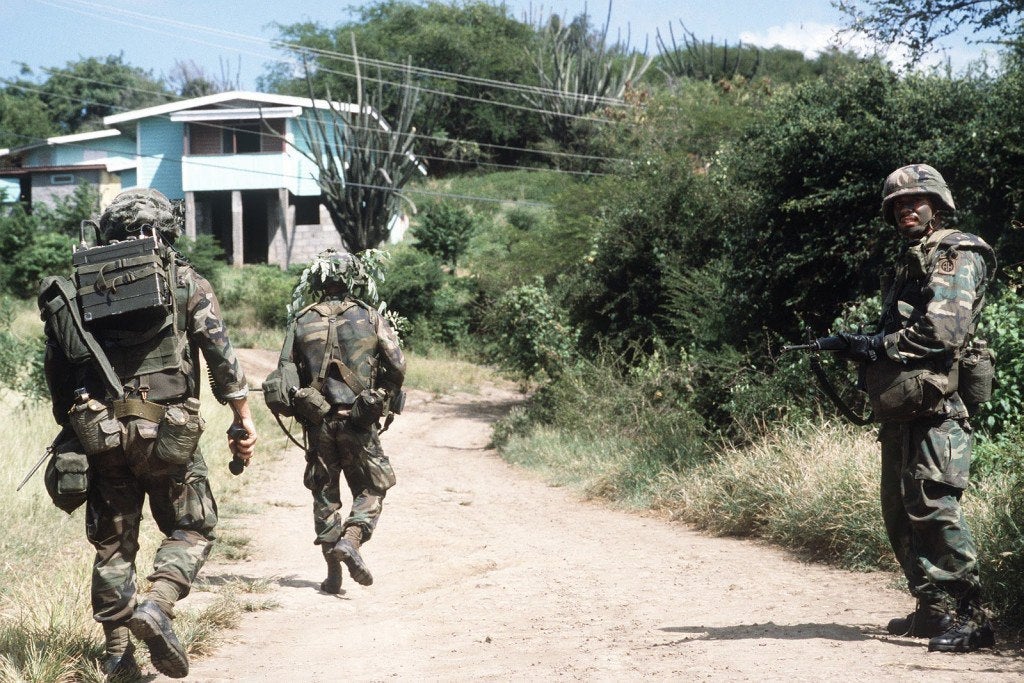 A combat jump and the gold star on your wings is the desire of all airborne personnel. During World War II, the U.S. Army fielded five airborne divisions, four of which saw combat, as well as numerous independent regimental combat teams and parachute infantry battalions. Today, the U.S. military fields one airborne division, two airborne brigade combat teams, and a number of special operations forces, all airborne qualified. Throughout the history of these forces, they conducted all manner of combat operations and tactical insertions. Here are the eighteen times, in chronological order, that the U.S. military conducted large-scale combat operations with airborne forces.

The first large-scale deployment of American paratroopers took place on 8 November 1942 as part of Operation Torch, the invasion of North Africa. The men of the 509th Parachute Infantry Battalion (at the time designated 2nd Battalion, 509th Parachute Infantry Regiment) were tasked with securing airfields ahead of the seaborne force landings. To accomplish this, they conducted the longest flight of airborne forces, originating from airfields in England. However, the jump was unsuccessful with troops widely scattered and ten planes having to land in a dry lake bed to disembark their troops due to a lack of fuel. A week later, three hundred men of the battalion conducted a successful combat jump on Youks-les-Bains Airfield in Algeria.

America’s second attempt at a combat jump was during the invasion of Sicily in July 1943. On the night of 9 July, the 505th PIR reinforced by 3/504 PIR and with attached artillery and engineers spearheaded Operation Husky. Two nights later on 11 July, the remainder of the 504th parachuted into Sicily to block routes toward the beachhead. However, due to numerous Axis air attacks and confusion within the invasion fleet, the troop carrier aircraft were mistaken for German bombers and fired on. This resulted in twenty three planes being shot down and the loss of eighty one paratroopers with many more wounded.

The first airborne operation in the Pacific Theatre was carried out by the 503rd Parachute Infantry Regiment in the Markham Valley of New Guinea as part of Operation Alamo on 5 September 1943. The 503rd seized an airfield that allowed follow-on Australian infantry forces to conduct an airlanding as part of the greater New Guinea campaign and were successful in driving out Japanese forces from the area.

With the success of the invasion of the Italian mainland hanging in the balance, on 13 September 1943 the paratroopers of the 504th donned parachutes and quickly boarded planes before jumping into American lines to shore up the perimeter around the Salerno beachhead. The drop zone was lit by flaming barrels of gas-soaked sand arranged in a T-shape. The next night, the 505th followed the 504th and continued to continue to reinforce the American lines.  A few nights later, the 509th Parachute Infantry Battalion was dropped in the vicinity of Avellino in an attempt to disrupt activity behind German lines but was widely dispersed and failed.

This is the airborne operation that all other airborne operations are measured against. In two separate missions, code named operations Albany and Boston, the paratroopers of both the 101st and 82nd Airborne Divisions jumped behind enemy lines as part of the invasion of Normandy and the cracking of Hitler’s Fortress Europe. Though the paratroopers were widely scattered over the French countryside due to misdrops, the havoc and confusion they created behind German lines was crucial to the success of the landings on the beaches.

As part of the greater battle of Noemfoor in Dutch New Guinea on the 3rd and 4th of July 1944, the 1st and 3rd Battalions of the 503rd PIR conducted a combat jump to reinforce American positions and to secure the Kamiri airfield. Due to poor jump conditions that led to excessive casualties, the drop of the 2nd battalion was scratched and they were landed by sea instead.

As part of the 1st Airborne Task Force the 517th Parachute Regimental Combat Team, the 509th and 551st Parachute Infantry Battalions, 463rd Parachute Field Artillery Battalion and numerous glider and parachute units in support, performed a combat jump into Southern France as the spearhead of Operation Dragoon on 15 August 1944. Due to poor visibility, most of the pathfinders and therefore most of the follow-on forces missed their drop zones and were widely scattered. Despite this, as had happened in Normandy two months prior, many of the men were able to regroup and secure their objectives.

During the infamous “a bridge too far” operation, American airborne units, the 82nd and 101st Airborne Divisions, jumped into Nazi occupied Holland during the daylight hours of 17 September 1944. Operation Market, the airborne component of Market-Garden, was the largest airborne operation ever undertaken, though due to a number of circumstances, it would ultimately be a failure and ended the Allies’ hopes of finishing the war by Christmas.

As part of the battle for the island of Luzon in the Philippines and the drive by the U.S. Sixth Army to take Manila, the 511th PIR and 457th PFAB, part of the 11th Airborne Division, dropped onto Tagatay Ridge south of Manila on 3 February 1945. The jumped linked up the 511th and 457th with the 187th and 188th Glider Infantry Regiments and the rest of the 11th Airborne Division for the drive to Manila.

On 16 February 1945, the 503rd PRCT performed the combat jump that would give it the enduring nickname “The Rock” onto the fortress island of Corregidor. The 503rd dropped right on top of Japanese positions and, in conjunction with the 34th Infantry Regiment, fought viciously to recapture Corregidor, which had been the last bastion of American resistance in the Philippines some three years earlier.

On 23 June 1945 Task Force Gypsy, consisting of 1st Battalion 511th PIR, Companies G I of the 2nd Battalion, a battery from the 457th PFAB, engineers, and glider troops from the 187th Glider Infantry Regiment conducted the final airborne operation of World War II, by jumping onto an airfield in northern Luzon to cutoff the retreating Japanese and linkup with the 37th Infantry Division as it drove north. Strong winds and treacherous terrain on the drop zone led to two fatalities and at least seventy injuries during the drop. This was the only time gliders were used in combat in the Pacific.

Spearheading the UN Forces drive north the 187th Airborne RCT conducted a combat jump north of Pyongyang in an attempt to cutoff North Korean forces retreating from the capital. The paratroopers captured their objectives with only light North Korean resistance. In the following days, they would work with British and Australian forces to destroy the North Korean 239th Regiment.

As the airborne component of Operation Courageous on 23 March 1951, the 187th ARCT, this time complimented by the 2nd and 4th Ranger Companies, once again conducted a combat jump against Communist forces in the Korean War. Though there was confusion and misdrops, the Regimental Combat Team captured its objectives quickly and allowed UN Forces to regain the 38th parallel in that sector.

As part of the larger Operation Junction City, the 173rd Airborne Brigade Combat Team, centered on the 503rd PIR, made the only large-scale combat jump of the Vietnam War on 22 February 1967. The plan was to create a hammer and anvil scenario with the 173rd along with other units forming the anvil while other forces, the hammer, would flush out and drive Viet Cong forces into the waiting trap. Though there were numerous clashes with Viet Cong forces, a decisive victory was not obtained by the American operation.

On 25 October 1983, Rangers from the 1st and 2nd Ranger Battalions along with Delta Force operators, Navy SEALs and Air Force Combat Controllers descended on the southern portion of the island of Grenada and captured the unfinished airfield at Point Salines. This opened the way for follow-on forces from the 82nd Airborne Division. By 3 November, hostilities were declared to be at an end with all American objectives met.

In the early morning hours of 20 December 1989, the entire 75th Ranger Regiment, followed by the reinforced Division Ready Brigade of the 82nd (consisting of 1st and 2nd Battalions 504th PIR, 4/325th AIR, 3/319th AFAR, and Company C 3/73rd Armor), conducted combat jumps to secure the Rio Hato and Torrijos-Tecumen airports in Panama. In the following days the Rangers and paratroopers continued combat operations in conjunction with other forces of Task Force Pacific. This marked the first and only combat parachute deployment of armored vehicles, the M551 Sheridan.

After Turkey denied access for American forces to attack Iraq from the north through Turkish territory, the 173rd ABCT was alerted for a combat jump into northern Iraq. On 26 March 2003, the unit, along with members of the U.S. Air Force 786th Security Forces Squadron conducted an airborne insertion onto Bashur Airfield to establish an airhead and allow for a buildup of armored forces in the north. This effort held numerous Iraqi divisions in the north rather than allowing them to be diverted south to oppose the main effort. The jump by the 786th marked the first and only combat jump by conventional USAF personnel and was the only large-scale airborne operation conducted as part of the War on Terror.