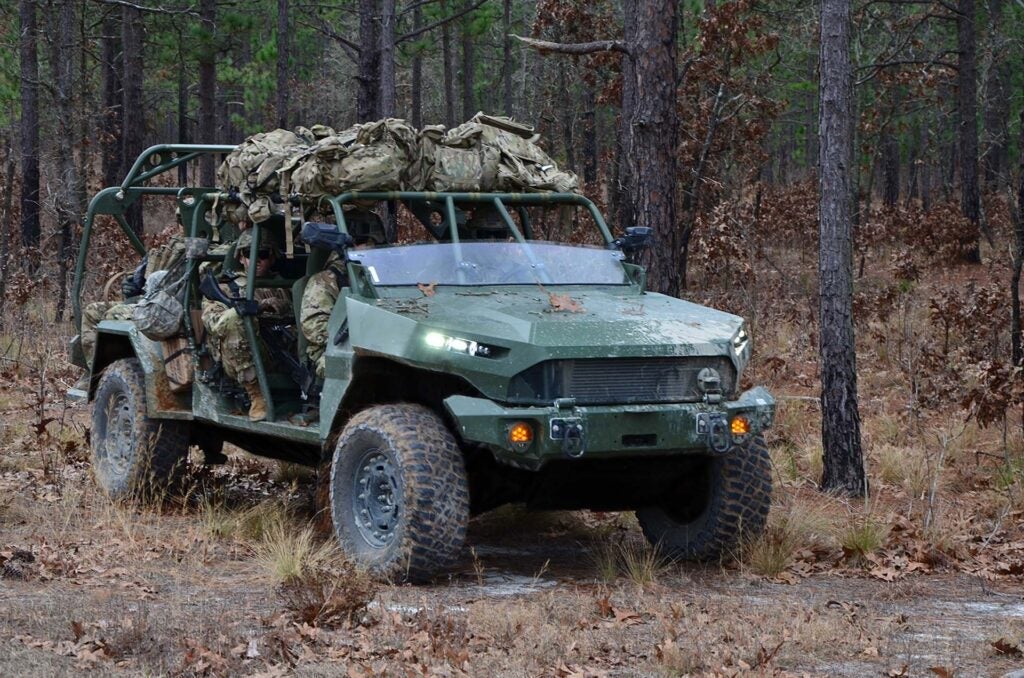 The ISV can carry nine soldiers and all of their gear (U.S. Army).

Comedian and talk show host Jay Leno is well-known for The Jay Leno Show and The Tonight Show with Jay Leno. He is also a huge gearhead with nearly 300 cars and motorbikes in his personal collection. Combining these two fields, Leno now hosts the web series, Jay Leno’s Garage.

On the show, Leno has featured cool and rare cars like the McLaren P1, the Back to the Future DeLorean, and even Batman’s Tumbler from the Dark Knight trilogy. Whenever possible, Leno takes the vehicles out of the garage to see what they’re really like where they belong: on the road. For his latest feature, Leno had to leave the garage for an outdoor testing facility.

Jay Leno’s Garage featured the Army’s new Infantry Squad Vehicle along with General Motors Defense President Stephen duMont. The ISV is based on the Chevrolet Colorado ZR2 and uses 90% commercially-available parts. Still, there are parts that are military-specific that Leno couldn’t show or talk about that make the ISV the ultimate frontline vehicle for airborne infantry.

The ISV is lightweight, powerful, and extremely mobile; qualities that Leno appreciated when he got behind the wheel. “It is a lot of fun,” he said on the show. “I wish they were building a civilian version because it’s the ultimate dune buggy.”

During the test drive, duMont highlighted the ISV’s mission amongst the military’s motorpool of increasingly armored vehicles. “It’s a light vehicle, in fact, an ultralight vehicle in terms of today’s military vehicles,” he told Leno. “Like the Willy’s Jeep back in WWII, this is designed to get the soldier quickly in and out of the frontline.”

The Army has ordered a total of 2,065 ISVs from GM Defense. Following testing and validation trials, the ISV will be delivered first to the 1st Brigade Combat Team, 82nd Airborne Division before it makes its way to other light infantry units.