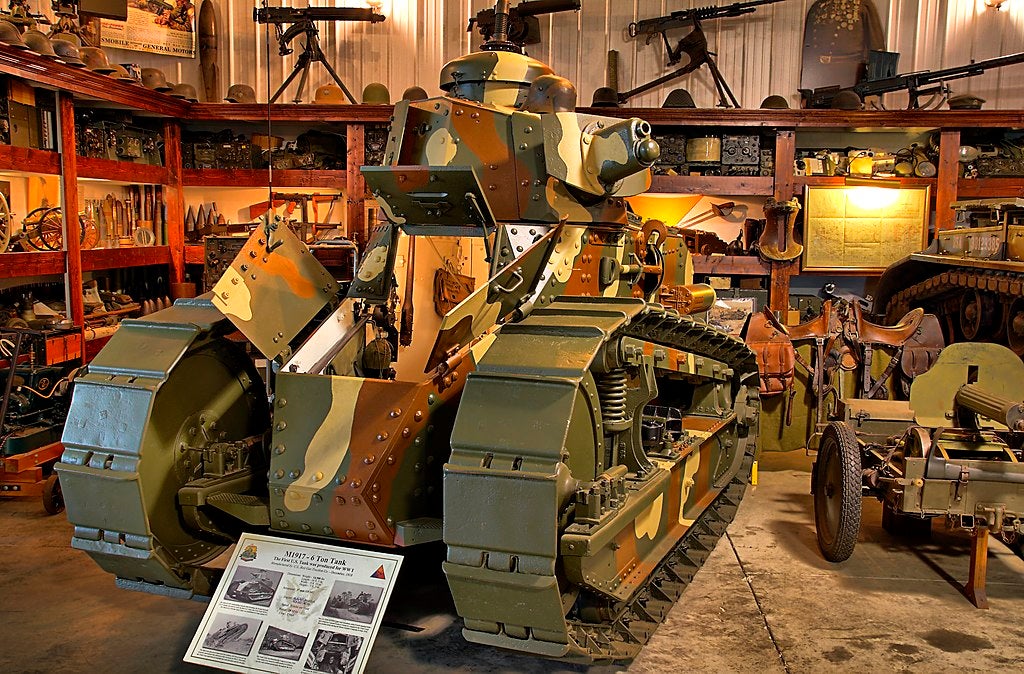 The First World War saw the introduction of tanks to the modern battlefield, but for the most part they didn’t fare too well on those battlefields. The United States didn’t enter the war with any tanks of their own but quickly decided that tanks were the wave of the future. There was one tank that stood out above all others back then.

The first U.S. tank, the M1917, was basically a copy of the French Renault FT, which many countries actually copied. It was the world’s first modern tank and changed the way officers like George S. Patton thought about modern warfare.

In the interwar years, funding for the Army dried up considerably and new tank designs weren’t really tanks at all, they were more like armored cars fitted with machine guns. Eventually, the U.S. produced the M2, which would go on to fight in World War II. The first American made tank to see combat didn’t go with U.S. troops, it would first see action with the British Army in North Africa.

Before the United States ever entered the war, the British were fighting for the empire’s possessions in North Africa. The U.S. Lend-Lease Act saw hundreds of thousands of tons of American-built equipment, vehicles and tanks shipped overseas to support the Allied war effort against fascism.

In November 1941, the British and Commonwealth forces were rushing to bypass Axis forces under Gen. Erwin Rommel to relieve the defenders of the city of Tobruk, which would be under attack for 241 days. To augment their forces, the British used M3 Stuart tanks in their surprise attack. They quickly crossed the Libyan border and almost came within sight of Tobruk.

For more than a month, the two sides battled it out in an epic desert tank battle. The Allied forces were using Mark I Crusader tanks and 170 M3 Stuarts while the Axis forces were using the Panzer IV tank. The M3 did not perform well in combat, taking heavy losses. The fault was not of the tanks, but instead the superior tactics used by the Axis Afrika Corps. The British used them to support the infantry rather than in tank-to-tank combat. The siege was lifted by the end of November 1941, but the fighting continued for six months afterward.

The Soviet Union also received Lend-Lease M3 Stuarts but were unhappy with their performance as well. The Soviets thought the Stuart was undergunned and carried too light of armor. It was still better than the USSR’s T-60 tank which was also undergunned. The Soviets would later decline more tanks from the U.S.

By Dec. 22, 1941, American troops were finally driving their own tanks into combat. The first unit to use the M3 Stuart against an enemy in tank-to-tank combat was the 192nd Tank Battalion in the Philippines, fighting a roughly equal opponent in the Japanese 4th tank regiment. The Japanese Army used the Type 95 Ha-Go light tank, which carried the same caliber weapon and similar armor.

The American and Japanese tanks fought as the U.S. forces in the Philippines retreated down the Bataan Peninsula. Eventually, the 192nd was ordered to destroy its Stuart tanks to keep them from falling into enemy hands when the Americans surrendered.

A year after the Siege of Tobruk was broken, the Americans landed in North Africa themselves. With them came thousands of M3 Stuart tanks. The Stuarts had a short life in the war, however, eventually being replaced by the M4 Sherman in North Africa, then becoming the workhorse of the Army tank corps during World War II.