This college football coach became a Green Beret in his 30s 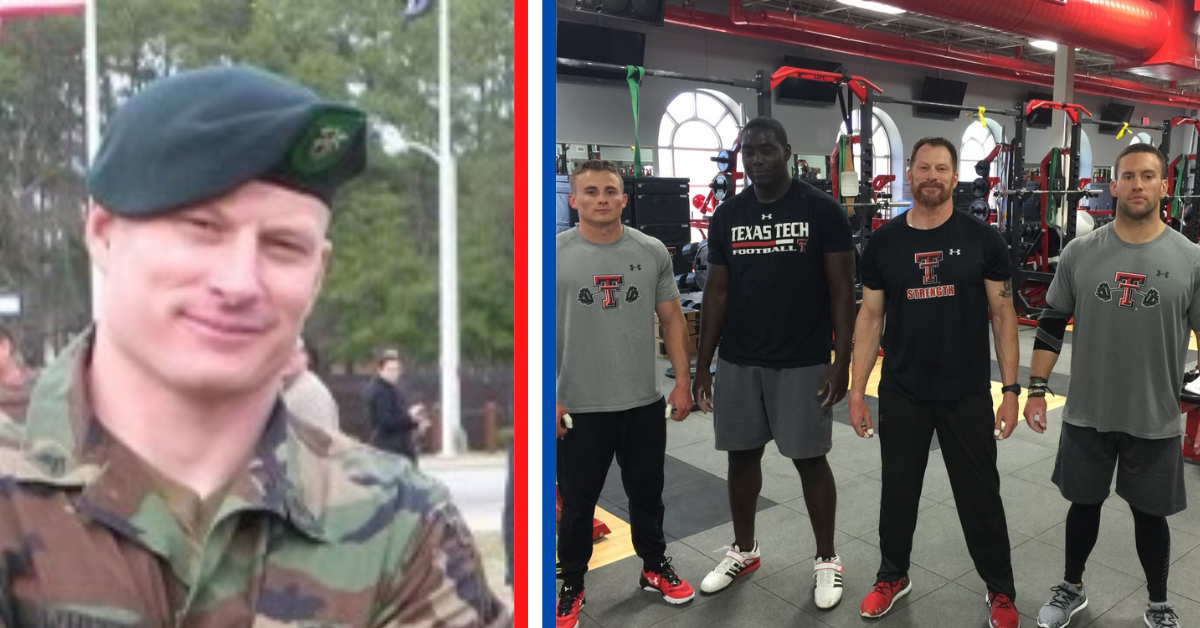 The terrorist attacks of 9/11 sent a wave of high school graduates to war, all hungry to fight for their country and against the enemy who dared harm her. But they weren’t alone in the desire to raise their right hand.

Russell “Rusty” Whitt was surrounded by reminders of military service growing up. “My dad was in the 101st Airborne so I grew up with pictures of him in his parachute on the wall. I was always interested in the military but was wrapped up in playing football and running track,” he explained.

Though he was a passionate athlete and loved fitness, it didn’t start out easy for him. “I had a condition called Osteomyelitis which is an infection of your bone marrow when I was an infant,” Whitt shared. “It can cause severe atrophy and weakening in your bones and your muscles around your connective tissue. I was painfully skinny growing up.”

At 11-years-old, his parents bought him a weight set from Montgomery Ward. Whitt remembers watching movies like Conan the Barbarian and Rocky, inspired to work out. “It changed my life,” he added.

The Dallas Cowboys played just down the road, fostering his love of football. His major was criminal justice in college until a visiting strength and conditioning coach spoke to his team. “I knew the NFL wasn’t in my future because I’d sustained serious concussions over the years but thought I would go into the FBI or become a police officer, until that day,” Whitt said.

After graduation, he became a strength and conditioning coach for various Texas college teams until landing a position with Sam Houston State. Whitt was home recovering from an ACL repair surgery, napping, with the TV on. Then he heard the words which would change everything.

He opened his eyes and watched the first tower fall. “My grandmother called me and said this is your Pearl Harbor. I felt like she drafted me,” Whitt shared. After a year of recovery, he walked across the street to the recruiting office. “I told him I wanted to be a Green Beret but he said I was too old. So I enlisted with a Ranger option but would go in as an Infantryman.”

He completed boot camp and was working his way through Airborne School when he caught the notice of some of the instructors. And a Fort Benning Special Forces recruiter. “This Master Sgt. came up to me and told me my orders had changed and I was going to the Q-Course,” he said.

After two years of training, he earned the coveted Green Beret and was assigned to 10th Special Forces Group.

“I got put on a team who just got back from Iraq. They were beaten to shit emotionally and had just lost their team Sgt., Kelly Hornbeck, who was a highly respected member of 10th group. Coming off that deployment — it was a stressful time for those guys,” Whitt shared. The team has also lost a Green Beret to suicide. “They didn’t want any new people to kind of be involved in it and I wasn’t received very warmly, for good measure, because they were like a family.”

So he put his head down and focused on training for the next year. In 2007, his team was deployed to Iraq where they ran missions for 10 months. “It was a really wild time because Iraq wasn’t locked down at that point,” Whitt said.

After returning home for a short six month break, they were sent back.

Whitt served for six years before making the decision to transition back to coaching and his marriage. Though he’d been married for the entirety of his service, they’d never lived together in the same state due to the extensive training and deployments.

He took a coaching position with Rice University but going from the SOF back to football was an adjustment for him. He spent three seasons at Texas Tech until he snagged a position at West Point. “It was refreshing to work with them, they were so easy to motivate. “They were very disciplined and the code of conduct at West Point doesn’t screw around,” Whitt laughed. “They’re a very successful program, they get the absolute best out of their athletes and it was a premier place to be.”

Though he was happy with his position, Whitt wanted to lead his own program. When a position to do so opened with Troy University in Alabama, he took it.

“It’s my job to be a teacher and show these guys how to move weights, run faster and grow spiritually and physically,” Whitt shared.

Despite his success, he misses being a Green Beret every single day. His goal is to use what he learned during his time in service to keep coaching and impact as many young athletes as possible.

“My military service changed me and how I perceive things. I learned a lot about myself, and how to deal with frustration and turmoil and emotional roller coasters and all that and help me become a better person,” Whitt said. I try to instill that in the athletes that I coach, I try to push them because I know the SF training is rigorous. I know you can push your body way further than you think you can. And your mind, too.”