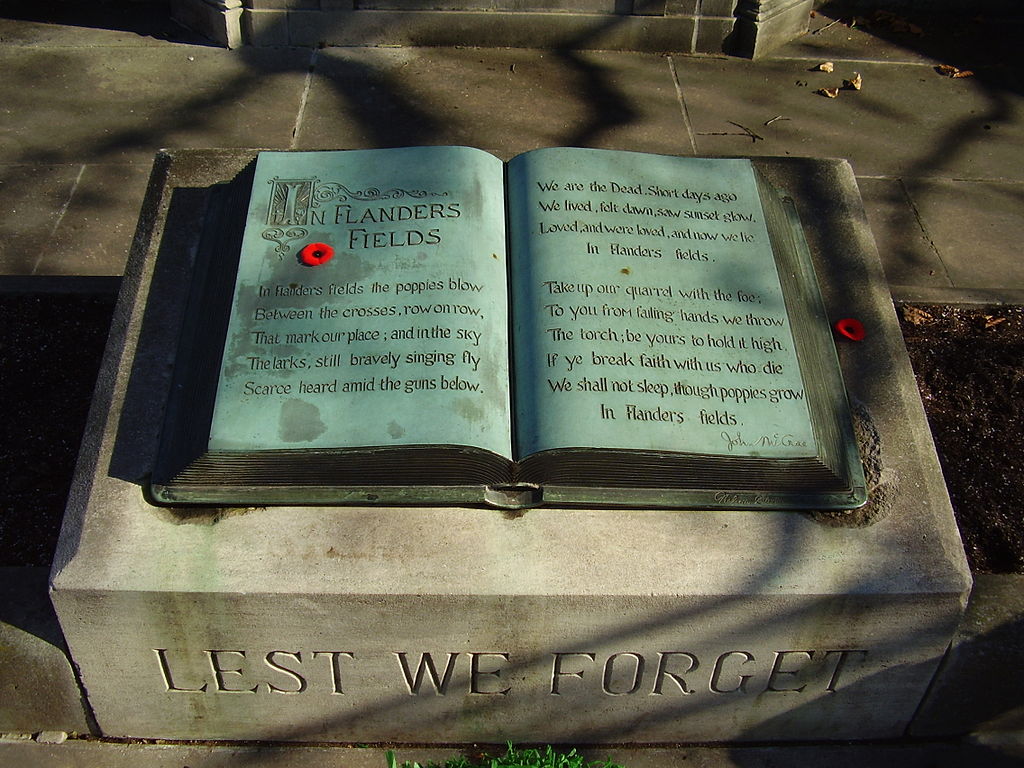 Canadian remembrance poppy pin adorns a memorial with the words to "In Flanders Fields" at McCrae House in Guelph.

Remembering the fallen is one of America’s most valued traditions. Throughout the history of our nation the American people have developed ways to subtly honor the fallen with dignity and respect. When civilians visit the gravesites of fallen veterans they will be met with a few peculiar details such as coins, specific flowers, and other mementos rich in military history. For those too afraid to ask out of fear of unintentional disrespect we have a guide to the three most common flowers resting on the graves of the fallen:

“All gave some, some gave all.”

Papaver rhoeas is the red flower poppy that has been used since the first world war in remembrance of those who paid the ultimate sacrifice. Its origins stem from the trenches and no man’s land where the poppy was the only thing that would grow. The brilliant red flowers upon the graves of veterans during Memorial Day have roots from the Great War era.

In 1915, Lt. Col. John McCrae a Canadian officer the inspiration to write about the flower dedicating it to the memory of his friend:

In Flanders fields the poppies blow
Between the crosses, row on row,
That mark our place; and in the sky
The larks, still bravely singing, fly
Scarce heard amid the guns below.

We are the Dead. Short days ago
We lived, felt dawn, saw sunset glow,
Loved and were loved, and now we lie,
In Flanders fields.

Take up our quarrel with the foe:
To you from failing hands we throw
The torch; be yours to hold it high.
If ye break faith with us who die
We shall not sleep, though poppies grow
In Flanders fields.

The poem In Flanders Fields inspired the UK government to adopt it as a symbol of remembrance and the rest of the allies followed suit. Ever since, the poppy flower symbolizes the sacrifice of all those who have served. The United States also adopted the flower in solidarity to symbolize remembrance to all troops fallen in battle.

The white calla lily also known as Zantedeschia aethiopica, is another flower used in arrangements honoring the troops who have passed on. White in our culture symbolizes purity and courage to fight for a righteous cause. Often the white calla lily will be accompanied by poppy flowers and hydrangeas.

The hydrangea macrophylla or the bigleaf hydrangea originates from Japan. Throughout history the color of the Hydrangea dictated what message a person wanted to say. Our modern interpretations of the symbolism this flower conveys are apology, gratitude, and understanding.

Roses are also a common flower placed on graves and the colors have similar symbolism. Yet, when you see a boutique made of poppies, lilies and hydrangeas you will know that the person is paying respect to a veteran thanking them for their sacrifice and courage and defending our way of life.

Do not place white Hydrangeas on a veteran’s grave as they represent vanity or boasting. Pink or purple may be used under the correct context. Pink refers to romance and deep sincere emotions more appropriate for a spouse. Purple means pride. To play it safe, I always recommend the blue variety so you have a natural red, white and blue gift when paying respect.