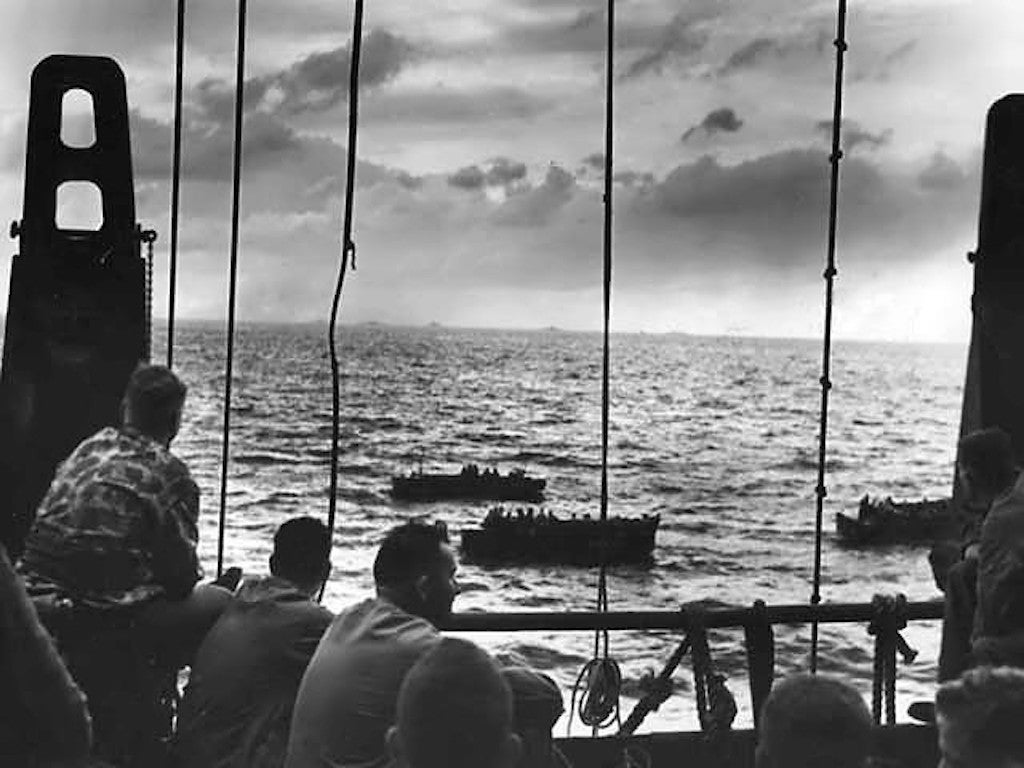 Little suspecting of the hell that awaits them, U.S. Marines wait aboard a Coast Guard manned combat transport at Tarawa for the invasion barges that will take them ashore. Beyond the rail Coast Guard coxswains can be seen maneuvering loaded barges. On the horizon other vessels are faintly visible. (Public domain).

Amphibious operations, often known as the Marine Corps’ bread and butter, are military actions in which naval and landing troops target hostile territories from the sea. It could be as a precursor to more onshore combat missions, to secure a site needed as a strategic naval or airbase, or to prevent the adversary access to the site or territory. Amphibious Ops have been in existence since the medieval ages, although the special machinery used today had not been invented, it was still used.

The capacity to estimate the level and frequency of high tides is fundamental for any amphibious action. The United States military organizers learned this during the Battle of Tarawa in the Pacific. If a miscalculation in the tide prediction occurred, the army could be devasted with nowhere to land. This uneventful occurrence happened to the US military, and they had to wait for several hours before the tide went down to favorable levels. This gave the enemy a more significant advantage, as the US military forces had already been discovered on the shallow reef.

While predicting tides might seem like an easy task, it can actually get complicated before it gets easier. Even those with oceanography knowledge and experience still find it difficult to predict the level and timing of tides. According to Isaac Newton’s research and data, Ocean tides are caused by earth deformation inflicted by the gravitational attraction of the Earth’s moon and sun. It is difficult to calculate these interactions because of the complexity of the matter. Different places on the Earth’s surface experience varying and changing angles of position comparable to the moon. Unlike solid matter, water reacts strongly to the moon’s and sun’s gravitational pull, and its motion towards these objects generates a wave-like pattern on the Earth’s side that is closest to the moon.

This terrestrial magnetism is stronger on the opposite side of the globe than the pull of the small puddle of water that exists on that location on Earth. As the solid Earth moves significantly closer towards the moon, this sliver of water creates the other tidal protrusion. To add more perspective, consider these watery budges as two long waves moving over the Earth as it turns.

A double pull is generated whenever the sun and the moon are lined up, and tides are pulled higher than when the two objects are in opposite sites. After determining this, the actual complication now kicks in. The Earth, the sun and the moon have elliptical orbits, implying their distances from each other often switch depending on the time of the year. The angles between them also change, and so does the gravitational pull. This means that the height and timing of the tides will depend on all these factors; therefore, they must all be considered when calculating predictions.

Fortunately, Isaac Newton already simplified most of the work, but this doesn’t make the calculations any easier. Generally, his research works best on steady and uniform Earth that does not contain deep oceans, continents, islands, different seas and many more. The ocean tide is basically generated on a moving planet. Friction is generated when the sea or ocean floor is in contact with moving water. This is why ocean times have different height and timing variations when they intersect at the shoreline. The coastline shape also determines the extent of the tide’s size and timing, even if the impact zone is relatively small. Keeping up with all these factors and ensuring they are favorable is the only way an amphibious operation can succeed.