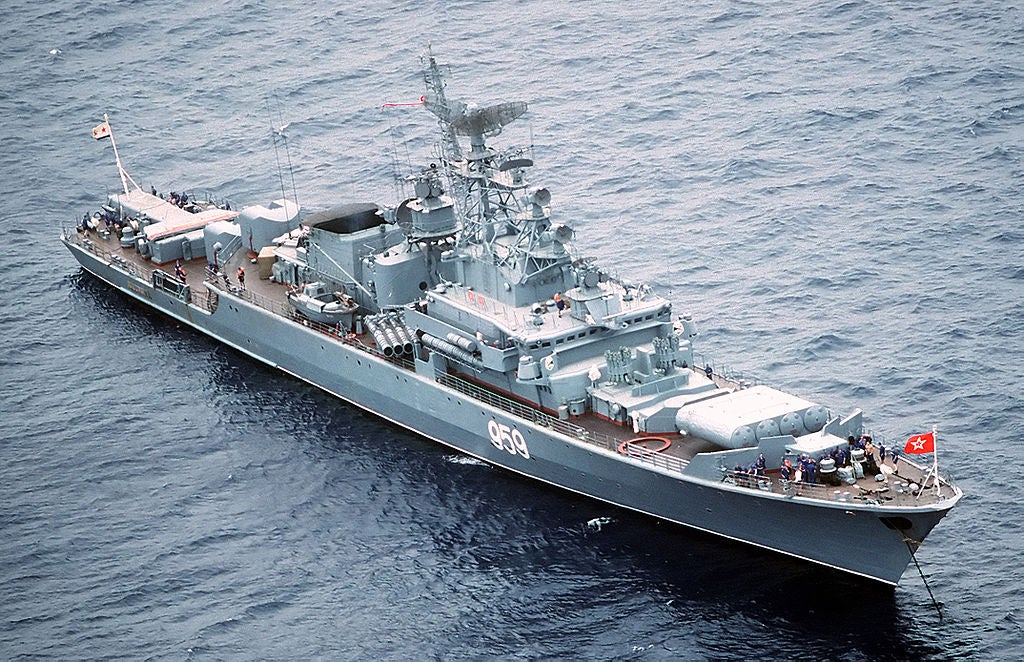 A Burevestnik-class frigate at anchor. Storozhevoy would have looked identical in most respects to the vessel pictured here. (Wikimedia Commons).

In 1975, a political commissar aboard the Soviet Union’s Burevestnik-class frigate Storozhevoy decided something had to be done about the rampant corruption and theft of the ruling communist party under Leonid Brezhnev. He wanted a platform that would allow him to address the entire population of the USSR and say what everyone already knew: the Soviet Union was corrupt and hollow.

Capt. Valery Sablin wasn’t a capitalist by any means. He was a dedicated socialist, but he saw the leadership of the Soviet Union in the 1970s as the world’s biggest threat to global communism itself. He decided he would take control of the Storozhevoy, sail it out of the Bay of Riga, into the Neva River and dock it next to the museum ship Aurora in Leningrad.

Next to that symbol of the Russian Revolution, he would address the entire country and call out the rulers of the USSR for what they were: corrupt bureaucrats who were stealing the nation’s wealth at the expense of the people. He wanted a return to Lenin’s idea of equality and paradise for the working class.

On Nov. 9, 1975, he tricked the ship’s captain below deck and locked him and a few others in a forward compartment. He then called a meeting of other officers and informed them of his plan, allowing them to decide if they were with him or against him. Those that wanted to go through with the plan locked up the ones who didn’t.

Sablin then delivered a speech to all 155 crewmen about his message. They were all in for the plan. Fearing the plan might be sniffed out before it got started, the Storozhevoy left Riga immediately and set sail for the Neva River. He had a good reason for doing so, as one of the officers who agreed to the mutiny escaped the ship to warn the Soviet military.

By the time the USSR learned what Sablin was up to, they readied half of the Soviet Baltic Fleet and a force of 60 aircraft to scour the seas looking for him and the Storozhevoy. Unlike the Red October, however, the Soviet forces found the frigate. Yak-28 bombers dropped 500 pound bombs next to the ship and repeatedly strafed it until it was dead in the water.

Once stopped, it was boarded by Soviet Naval Infantry. The mutineers had already turned on Sablin, who was wounded in the air attacks. They freed the captain and detained Sablin. The Soviet military detained and interrogated the entire crew but Sablin and another conspirator, a 20-year-old sailor, were tried and convicted.

By July of the following year Sablin was put on a public trial, where he was convicted of high treason. He was sentenced to die by firing squad for the conspiracy effort.  His second in command was sentenced to eight years in prison for his role in the mutiny. Sablin’s sentence was carried out on August 3, 1976.

That reader was an insurance salesman named Tom Clancy.