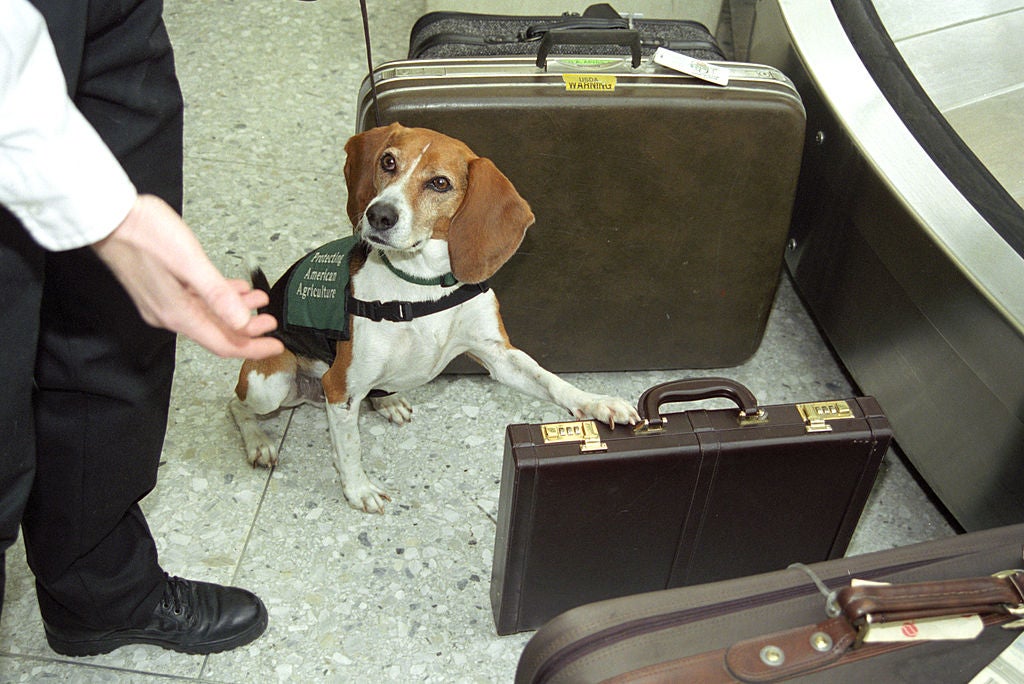 The APHIS Beagle Brigade does an interception at Dulles. (U.S. Department of Agriculture).

It might sound silly to wage a war without using bombs, bullets, or any other kind of device that can actually take down an enemy military unit, but that’s not how American defense planners work. There are many weapons that could be more devastating to the U.S. homeland than an explosive. The COVID-19 pandemic killed a million Americans – let’s see an AK-47 do that.

One of the most lethal ways of killing Americans would be to attack the American food supply or its ecosystem. A single disruption in this chain could have a devastating effect that would not only kill millions but gravely harm our country’s ability to defend itself. But first, an attacker (or even an ignorant tourist) would have to get an external threat into the United States. That’s where the Beagle Brigade comes in.

Dogs have long been used for sniffing out a variety of items to combat a variety of different crimes and attacks. People know that dogs can be used to find explosives and dead bodies, but many didn’t know that they are used to find electronic devices (to find evidence of child pronography), detect buried land mines, and now even fruits and vegetables.

It all depends on the breed of dog being used and beagles, which were originally bred for rabbit hunters, have an acute sense of smell, even for dogs. They are able to detect smells that are undetectable with even the most finely-crafted pieces of scientific equipment. They also have a huge appetite for almost anything, and are very undiscerning when it comes to food. To boot, they are also friendly, which makes them perfect for use in public areas.

This is why the United States Department of Agriculture uses beagles to search airports and other ports of entry into the U.S. to search for unauthorized meat, animal byproducts, fruit and vegetables that might be harmful to the American ecosystem and food production chain.

A Beagle isn’t just out to find any food. The breed can be trained to look for specifically prohibited items coming through an airport baggage terminal. Meat, milk, egg, poultry, seafood and their products are prohibited from entering the U.S. Fresh and frozen fruits and vegetables are also prohibited. The list is a long one and includes soil, coconut husks, and anything that might sprout or grow.

It’s an important line of defense. The introduction of an invasive species or disease into the United States could have devastating consequences. They push out native species, reduce biological diversity, kill forests, alter wildfire intensity and frequency, damage crops, close foreign markets to U.S. products from infested areas, and cost millions of dollars in treatments to industry and government.

In 2015, Khapra beetles were discovered flying through Dallas Fort Worth Airport in undeclared bags of rice and beans coming from India and Sudan on five different occasions. The Khapra beetle is the world’s most destructive insect and will devastate grain and cereal fields, as well as food storages. It is the only insect that requires regulatory action, whether encountered dead or alive.

The potential devastation was averted because of a beagle that could recognize 50 distinct smells put his paws on a traveler’s bag while in customs. When opened, the rice revealed full Khapra beetles, larvae, and casings – a biological disaster waiting to happen.

Luckily, the “Beagle Brigade” was on the job. These little doggos are recruited from shelters, trained to have a 90% success rate, make 75,000 seizures every year, and after a life of service are rehomed to a loving family.