Today in military history: Patton wins race to Messina - We Are The Mighty 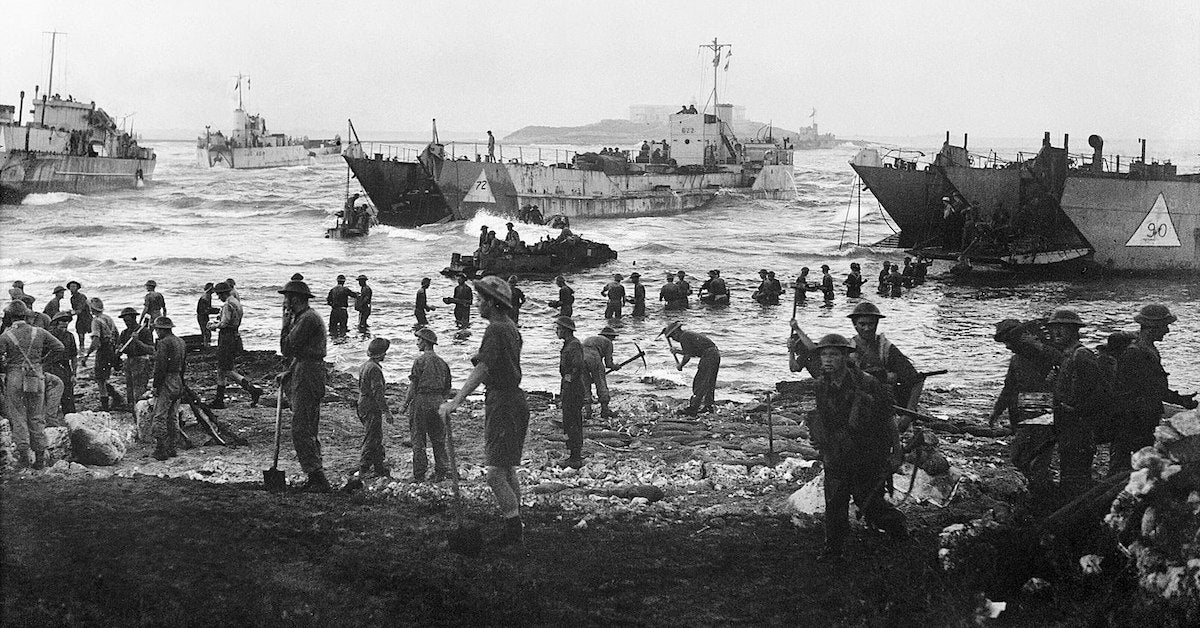 Troops from the 51st (Highland) Division unloading stores from tank landing craft on the opening day of the invasion of Sicily, July 10, 1943. (Royal Navy image).

Operation Husky, the Allied invasion of Sicily in July 1943, was not without its flaws and screw-ups, but the Allied troops tore open a gap on the beaches and then pressed themselves against the Axis lines, driving back German and Italian troops as they attempted a massive evacuation.

U.S. Lt. Gen. George S. Patton Jr. and British Gen. Bernard L. Montgomery raced at the head of armored columns toward the port city of Messina on the island of Sicily’s east coast.

For weeks, German and Italian troops dug into the mountains, fighting delaying actions. On Aug. 8, with the eventual collapse clear, Germany began secretly ferrying 60,000 Italian troops and about 40,000 Germans across to Italy.

The Allies knew by the next day that some sort of evacuation was underway. But just like how the Nazis failed to capitalize on the Dunkirk evacuation, so too did the Allies fail at Messina. Allied leaders remained focused on the ground fight. No ships closed the Strait of Messina, no planes took out the ports in Messina or mainland Italy.

This failure would come under scrutiny at the time and in the decades since.

Germany not only got approximately 100,000 Axis troops across, they were able to recover 2,000 tons of ammunition, 47 tanks, 94 heavy artillery pieces and almost 10,000 vehicles — a massive success of sealift capability.

Of course, this made liberating Messina much easier than it otherwise would have been for Patton and Montgomery. But just like the evacuation at Dunkirk meant that Germany would have to face those troops later, the evacuation at Messina allowed Germany to reinforce itself in Italy.

On Aug. 17, Patton’s 7th Army arrived several hours before Montgomery’s 8th Army, which earned him bragging rights for winning what history refers to as the unofficial “Race to Messina,” but Patton is also credited with out-commanding Montgomery.

Yes. They were on the same side. But that’s how Patton rolled. I mean, he once slapped a hospitalized soldier in the face and accused him of cowardice.

Nonetheless, after a month-long campaign, Allied forces finally completed the battle for Sicily and began to prepare for the advance against the Italian mainland.