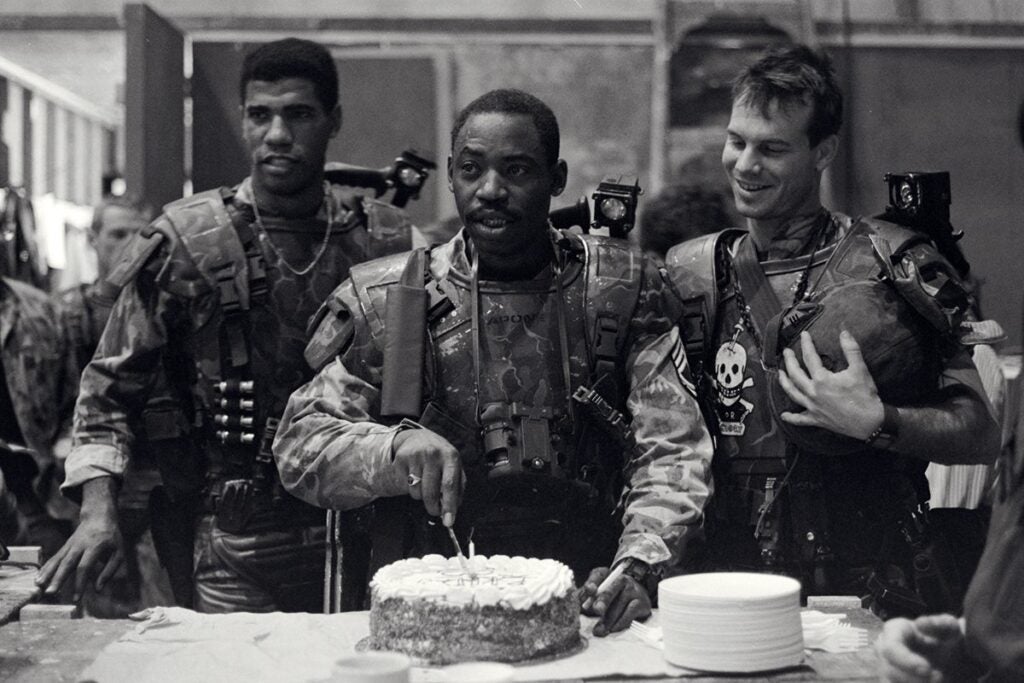 Science fiction is a difficult genre to get right and is worth repeat viewings. Some of the greatest roles and performances occur in the science fiction world and the below list compiles some of the best, which were portrayed by military veterans.

Alec Guinness is world renown for his acting ability and the length of his career, which spanned from the 1930s English stage all the way to the 1990s, played Obi-Wan Kenobi with a sense of wonder and wisdom. Although Guinness was known to think of Star Wars as “fairy-tale rubbish”, maybe because some of his greatest roles were in military war dramas directed by Sir David Lean, or because he wasn’t that keen on science fiction, he still did a masterful and memorable portrayal of the wise and hearty Jedi master. He adds to the original trilogy’s watchability factor as the forever sage advisor to young Luke.

Guinness served as an officer in the Royal Navy in World War II and commanded a Landing Craft Infantry during the Allied invasion of Sicily, known as Operation Husky.

Leonard Nimoy brought us the highly logical and cool Spock for the TV show and later film series of Star Trek. His work showed us a new way to look at beings from other planets and those that would identify as an “other” in our society. He played it with conviction and purpose, even though he was initially skeptical of taking the role. Nimoy even named his biographies I Am Not Spock and I Am Spock on this central character in the world of science fiction and space travel. He lent his hand to directing some of the Star Trek films too. Overall, Spock will live forever as a character unique in his own right and irreplaceable as well aboard the USS Enterprise.

Nimoy served in the US Army from 1953 to 1955 in the Special Services department and attained the rank of Staff Sergeant.

Al Matthews gave the world the grittiest and most honest Gunnery Sergeant Apone we could have ever wished for. His lines, bearing and command presence give credence to Apone and a desire to have seen more of him in the role. Aliens would not have been the same without him and him bringing his real-life experiences as a Marine in Vietnam to the role of Apone. James Cameron and crew made an excellent choice in casting him and he helped rescue a couple of cast members from a burning set-piece during the filming (watch the Aliens DVD with commentary to hear the full story). Apone served as the inspiration for Sgt. Avery Johnson in the Halo series as well.

Matthews served six years in the USMC graduating from Parris Island on May 25, 1966, and serving in the Vietnam War. He is quoted, “I spent six years in the United States Marine Corps; I hold 13 combat awards and decorations, including two purple hearts. I was the first Black Marine in the 1st Marine Division in Vietnam to be meritoriously promoted to the rank of sergeant; I served with Kilo Battery, Fourth Battalion, 11th Marines, 1st Marine Division, of that I am very proud.”

Roy Scheider has portrayed authority figures throughout his career in such films as The French Connection and the Jaws and its sequel. His honed father figure in charge persona lent much credibility and watchablility to the TV show seaQuest DSV, which aired from 1993 to 1996 for 57 episodes. Scheider did depart the final season which led to Michael Ironside taking over as the captain of the ship. Nonetheless, Scheider brought professional work and an aurora of being able to handle any situation to the show, which made it memorable to us kids from the 90s. Having a much bigger ship than the Orca, a la Jaws, maybe gave his character more confidence. He also didn’t have to tangle with Captain Quint.

Scheider served in the US Air Force as a First Lieutenant in operations from 1955 to 1958. He served in the Reserves and was made Captain, ending his time in the Air Force in 1964.

Sam J. Jones earned his place in science fiction history as the seminal character Flash Gordon in the film of the same name in 1980. The film notes an all-star cast with a soundtrack performed by Queen. Although the production was troubled and the project was turned down by George Lucas to direct, it has established itself as a cult classic of science fiction and the 1980s. Jones does well in his role and what he has to contend with as the hero. It is a fun film to revisit for many reasons and he is one of them