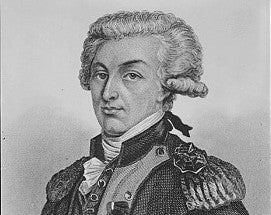 The United States owes its success in the Revolutionary War to help from France. The chief architect of that help was Gilbert du Motier, Marquis de La Fayette. In America, we simply call him “Lafayette.”

When France needed help during World War I, a squadron of American airmen volunteered their skills to fight against Germany. They called themselves the Lafayette Escadrille. When American troops finally arrived in France years later, their leaders walked into the tomb of the nobleman and announced, “Lafayette, we are here.”

The relationship between the Marquis and the United States has endured for many centuries because of his admiration and service to a country that was not his own. That admiration runs so deep, that the nobleman is buried in American soil – in Paris.

When the Marquis de Lafayette came to the United States to fight the British in the Revolution, he was so committed to the cause that he volunteered to serve without pay. Unlike other French officers volunteering, Lafayette had the military pedigree to be of use and soon came to be the right hand man to Gen. George Washington himself.

That pedigree didn’t come with much experience. Lafayette would be learning as he served the American cause. Luckily, as a wealthy man, his personal contributions more than made up for what he lacked in military experience. But as he gained that valuable experience, he proved himself an able commander.

A dedicated Enlightenment thinker, his devotion to the cause of American ideals led him to fight in several battles, to be wounded at the battle of Brandywine, and encourage France to recognize American independence. Most crucially, it was Lafayette’s forces that harassed Cornwallis on his way to Yorktown.

This forced the British to move across the James River, where they were eventually trapped by Washington, Lafayette and Comte de Rochambeau  by land and the French fleet by sea. He was forced to surrender his army after an almost three-week siege. It was the beginning of the end of the war, and the start of the American experiment.

Lafayette fought in the Continental Army all over the colonies, from New England to the Mid-Atlantic to the South, and was one of the few things that all the new states of the United States had in common. He so loved the ideals of the American Revolution that he tried to export them to France when he returned home.

Lafayette would return to the United States many times in the years following the revolution. His visits would confirm the idea that the Founding Fathers had created a functioning democracy, based on the egalitarian values of the Enlightenment. He came to love the United States and proclaimed that he wanted to be buried in American soil.

On his final visit to the United States, Lafayette filled a trunk full of earth from the land near Boston’s Bunker Hill. When the noble died in 1834, his son interred him in the dirt from America. The American flag has flown over his grave continuously since 1850, a simple site behind an innocuous high stone wall.