The first machine gun was invented before the Revolutionary War 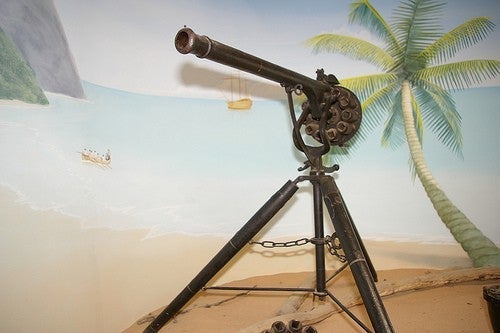 Invented in 1718, his “Puckle Gun” is the first weapon to be called a “machine gun,” even if it doesn’t fit the modern definition of the word. The Puckle Gun was tripod mounted, intended for use on ships but had field uses as well. The cylinders revolved manually, firing 32mm shot through a 3-foot barrel and loaded while detached from the main gun.

The main problem was that instead of shooting a series of shots, the chamber had to be unscrewed before the handle could revolve the ammo, then screwed in again to seal the breech to the barrel. In demonstrations, the Puckle Gun could fire nine rounds per minute, tripling the output of disciplined troops, whose rate was three rounds per minute.

The armed forces of Britain didn’t respond favorably to the weapon. As a result, neither did the investors of the time. Only two models of the Puckle Gun exist today, at the homes of members of the Montagu family, the only people to ever buy Puckle Guns with the intention of using them.

Montagu, while acting as Britain’s Master-General of the Ordnance, purchased this first machine gun for use on a doomed expedition to capture St. Vincent and St. Lucia. It’s unknown if they were ever used in combat.