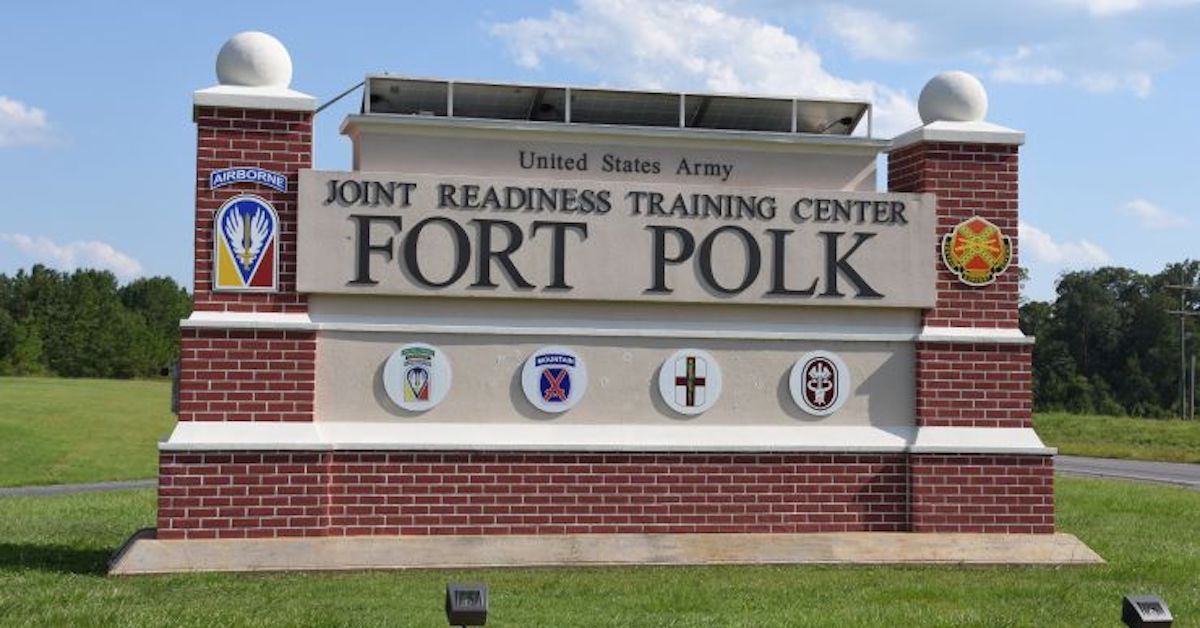 Deep in the swamp – or what feels like the swamp at least –  lies a training ground whose memories haunt your dreams forever. What pops up when your headlamp goes off? Why does the ground look like it’s moving? It’s all in here… it’s all Fort Polk.

The itsy-bitsy swarm of spiders

It’s night and you are patrolling through the Vietnam-like jungles of Fort Polk in search of the elusive “G Man.” The humidity is so thick you could cut it with a knife and as you scan the ground with your headlamp, tiny flashes of light shimmer back at you from the grass, bushes, and trees that surround you. No those aren’t water droplets and you didn’t suddenly walk into a diamond mine.

They are spider eyes and there are hundreds of them across every inch of ground within “The Box.” In Louisiana, there exist such species of spiders, like the massive Banana Spider who live to haunt you forever. According to local wildlife guides, they’re likely hiding or in webs between trees which wouldn’t affect you unless you’re doing such things like digging foxholes, fighting positions, or traipsing through the wilderness in the dark. All things which in fact, you will be doing in the box while training there. Good thing you packed a flame thrower just for this instance.

The first few days after arriving at Fort Polk for training usually involve unpacking Conexes, unloading vehicles at the rail yard and attending training classes. The weather during this period is likely sunny and warm, giving a false sense of hope that perhaps it’s not so bad here after all. Then at the precise moment, your unit enters the box, the monsoon hits.

With an average yearly rainfall around 60 inches, it’s nearly double the national average. Your hooch is in mortal danger of becoming swept away (with your body in it) when the puddle quickly becomes a raging river.

Beware of the “swamp ass”

You wake up- you’re sweating. You go to sleep-sweating. You stand still and you’re sweating. Not only is it embarrassing, but it’s stinky. This particular form of “booty-dew” is nearly impossible to solve since it’s likely you only rucked in with a few extra shirts or socks, which are likely still wet from last night’s flash flood that swept through the camp.

Gators, mosquitos, and horses- oh my!

Fort Polk is home to a host of species we’re all terrified of. Ever parachuted into a cloud of fog to see nothing, but hear the pounding of hooves coming straight for you? Welcome to Fort Polk. Wondering what that fast-moving cloud is that covered the sliver of sunshine? It’s mosquitos. They’re so bad down here that slapping yourself in the face is not only “normal” but it’s a tactical strategy. You’re not crazy, they are. Another fun fact about this paradise you ask? Louisiana has one of the highest populations of alligators in the U.S.

So when that nearby flood pond looks like the salvation from “swamp ass” you’ve been looking for, think again. If you’re lucky enough to avoid the real-life jaws of death, perhaps you should check your ankles after the LT’s suggestion to save time. Leeches are just another of God’s greatest creations awaiting your arrival to Fort Polk.

Finally, the Conex is packed, the vehicles loaded and you’re on the march out. You’ve survived. There’s something special waiting for you…next year’s rotation back to this paradise.