The unknown story of Air Force Medal of Honor recipient Richard L. Etchberger - We Are The Mighty 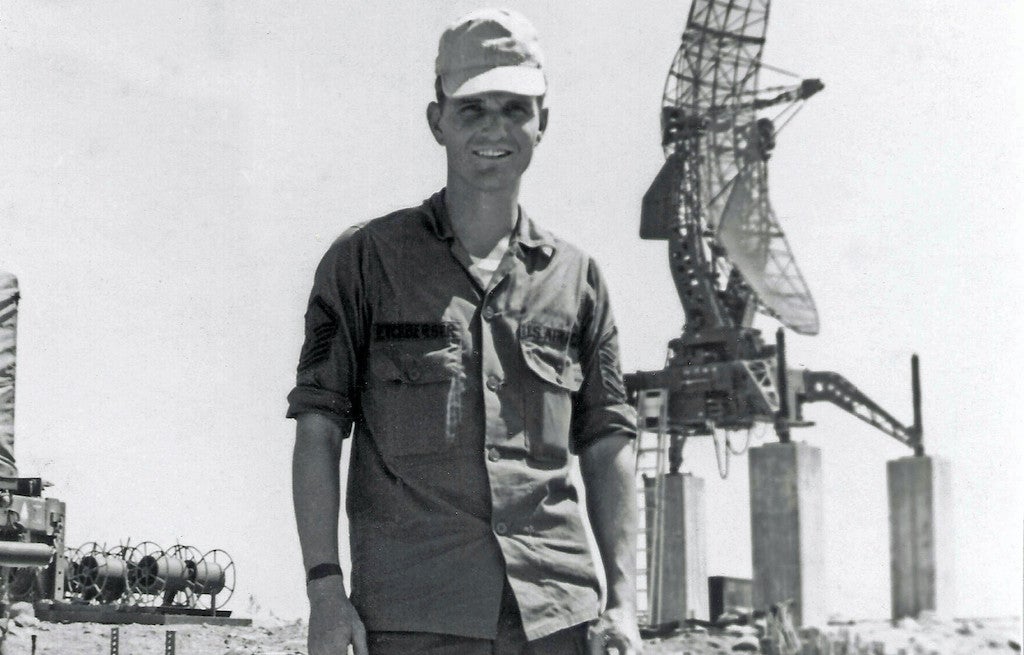 With only two exceptions, all Air Force enlisted recipients of the Medal of Honor, even going back to the Army Air Force in World War II, served as aircraft crew members. This makes sense, as the Air Force enlisted like to say: “We send our officers out into combat.” The first exception is Chief Master Sergeant Richard Etchberger, who perished covering his troops as they made a desperate escape from an isolated clandestine mountaintop radar site in Laos while under heavy fire by a vengeful North Vietnamese army. Like many Medal of Honor actions, it has taken decades for Chief Etchberger’s acts of valor to surface from the murky shadows of the “secret wars” of the Vietnam conflict.

So, what was a radar site, with its small group of Air Force radar technicians doing on a mountain top in the “neutral” country of Laos, very near the border with North Vietnam?

The answer goes back to the establishment of the U.S.’s nuclear bomber fleet under Strategic Air Command. A peacetime system of using radars to evaluate or “score” nuclear bomber practice runs was adapted to help guide B-52 bombers operating in southeast Asia. This system was greatly needed in the largely uninhabited, often rainy, and cloudy conditions of tropical Vietnam. The new system was named Combat Skyspot, and a series of highly classified, clandestine radars were set up across Southeast Asia, called Lima Sites.

The Lima radar sites were an integral part of the multifaceted spectrum of clandestine activities that were characteristic of the Vietnam War, including special operations in the neutral countries of Laos and Cambodia adjacent to the “two” Vietnams. Prominent among these was the arming of Hmong and Rhadé indigenous peoples that lived in the region. These people had been ill-treated by both the Vietnamese and previous French colonial system in Indochina. Supplying these guerrilla fighters, and their Special Forces advisors, led to the creation of the Central Intelligence Agency’s clandestine airline, Air America.

Lima Site 85 embodied all of these elements. Established in 1966, It was the closest site to North Vietnam, just 15 miles from the border. Located on one of the highest mountain peaks in the vicinity, Phou Pha Thi, it was critical in guiding bombers “going downtown,” as missions to Hanoi and Haiphong were called by bomber crews.

The site had an Air America airstrip and was protected by a large group of Hmong people. The concept was to literally attempt to hide in plain sight, protected by the mountain’s sheer cliffs on three sides and the Hmong below. Unfortunately for the men at the site in March 1968, the concept was flawed.

Starting on March 10, the site came under heavy North Vietnamese artillery fire, followed by an assault by sappers and infantry. About half of the airmen at Lima Site 85 were killed in the initial assault, including the site’s commander. The survivors, including Chief Etchberger, escaped to a cliff a few feet down the west side of the mountain. A running battle ensued between the North Vietnamese and the Hmong fighters both on the mountain and in the valley below. At dawn on March 11th, U.S. helicopters and close air support aircraft began evacuating the Site 85 airmen from the cliff. Their location revealed, the airmen fought off North Vietnamese attackers with M-16s and grenades. Etchberger exposed himself to heavy fire repeatedly while the wounded were loaded. He was killed by gunfire while suspended in a sling under a helicopter, with all of his men already evacuated. The site was subsequently destroyed by numerous airstrikes in the following days.

The events at Lima Site 85 remained highly classified for many years. The survivors and the families of the fallen were sworn to austere conditions of secrecy. Chief Etchberger was awarded the Air Force Cross, but the award remained classified as well, and he was not officially listed as Killed in Action until 1981. In 2010 the Air Force Cross was upgraded to the Medal of Honor and was presented to his family by President Obama at a White House ceremony.

Despite frequent rocket attacks and assaults on U.S. air bases all during the war, Lima Site 85 was the largest single loss of Air Force ground personnel during Vietnam. Since the desperate 1968 battle, only partial remains of TSgt Patrick L. Shannon and Lt. Col. Clarence F. Blanton have been recovered and returned to their families.

The remains of the other nine men who died on the mountain have yet to be found. Those nine are: