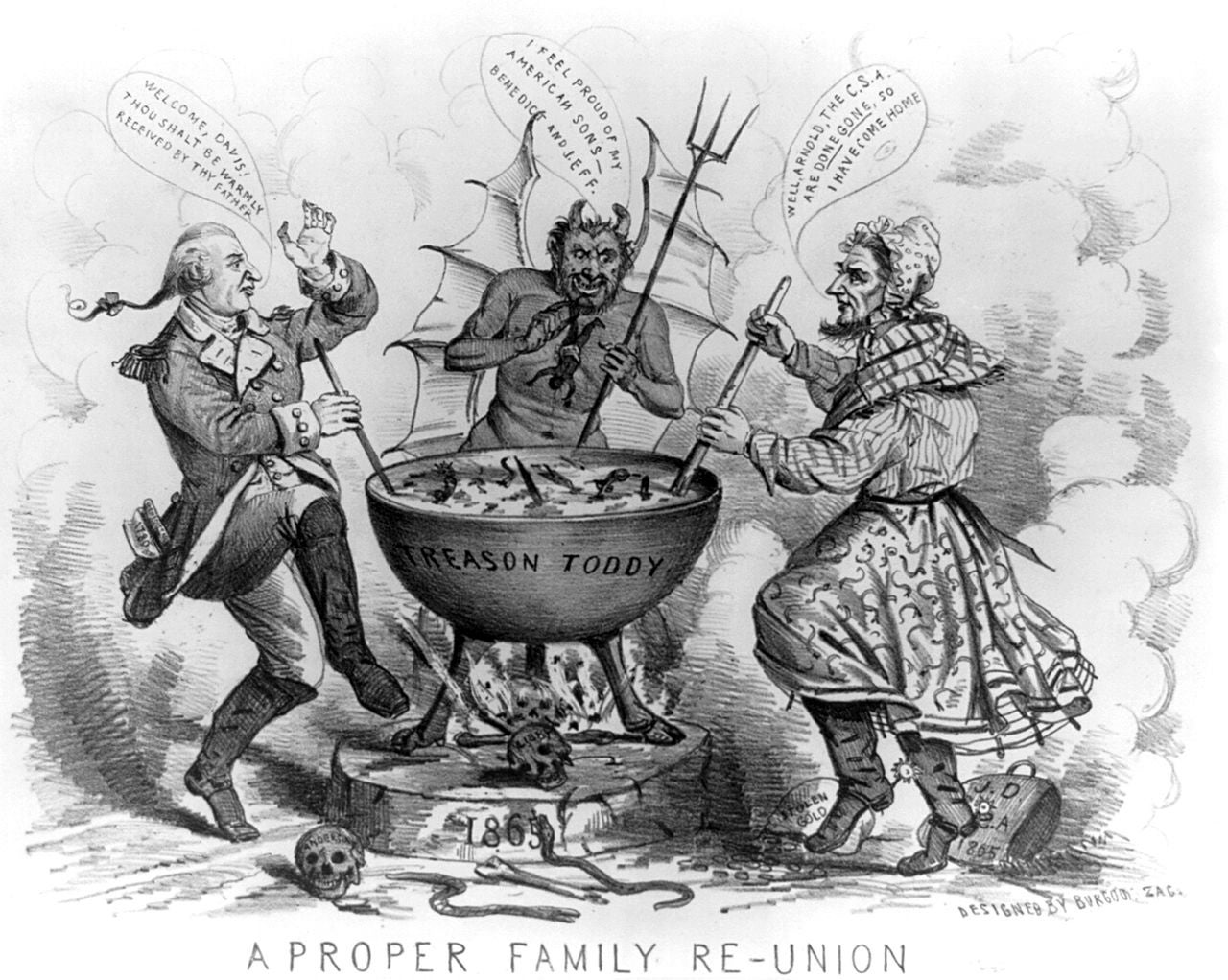 This is a political cartoon, captioned "A Proper Family Re-Union" at the bottom. It depicts Satan and Benedict Arnold welcoming Jefferson Davis to Hell. (Wikimedia Commons).

What causes someone to betray their country, everyone and everything they’ve ever known, and risk their freedom – and maybe even their life – for some kind of short term gain? For some it’s power or prestige. For others, it’s just cold, hard cash. Some are willing to betray their countrymen for a little taste of countrywomen.

No matter what their motivation, traitors have the ability to cause the most grievous harm to the security of the United States and compromise its military and foreign policy objectives. These are the people we trusted the most – and had the most to gain through their subterfuge.

John Walker worked within the U.S. Navy’s secretive submarine force and came to manage the submarine force’s entire communications network. With a long career of seemingly excellent service, he was promoted quickly and given a top secret clearance, along with access to the Navy’s most sensitive information.

Walker’s attempt at living a playboy lifestyle caught up to him eventually. In the face of mounting debt, he walked into the Soviet Embassy and offered his services to the USSR. Over the course of more than 20 years, he gave away more than a million decrypted secret messages, the code keys to deciphering more messages, the locations of American nuclear submarines, and the entire planning and operational guides to the ongoing war in Vietnam.

The KGB spy also recruited friends and family members into his growing spy ring, all for his own monetary gain. In the end, his wife and daughter, who he failed to recruit, gave him up to the FBI. In a quick investigation, Walker was finally apprehended aboard the USS Nimitz, caught red handed with a trove of classified information. He had to be escorted under guard to keep him safe from sailors and Marines who wanted to dole out their own punishment.

Walker was convicted and handed a life sentence, which ended when he died in federal custody in 2014.

Ames was almost a lifelong CIA employee, first coming to the agency doing clerical work in high school. After a brief stint in Turkey and elsewhere as an operative, he returned to CIA headquarters stateside and began working the Soviet – East European Division. Along the way, he developed a noticeable drinking problem and picked up an expensive mistress. His debts began adding up as he was placed on the Soviet counterintelligence mission.

After releasing what he believed to be harmless information to the USSR, he received a quick payday, and was soon hooked into giving the Soviets more and more information for more and more money. He began giving out the names of counterintelligence assets and operations that the KGB rolled up in a hurry. The quick end of these operations led the CIA to believe a mole was in counterintelligence. Meanwhile Ames was making a fortune to the sum of $4.6 million. Between 1985 and 1994, Ames fed information to the KGB about every western mole in Soviet intelligence, compromising the lives of countless informants.

Thomas Jefferson’s vice president had a number of plans to betray the United States. He offered to take Louisiana out of the Union for the British in exchange for $500,000 and a few ships of the line. He made this offer to a British agent on no fewer than three separate occasions, even while still sitting as vice-president.

Burr’s grand scheme was creating a group of wealthy planters and Army officers to capture a large swath of North America, specifically, the American Southwest, maybe even conquer Mexico, and form a separate government. He was ultimately betrayed by James Wilkinson in New Orleans and was put on trial. Without credible testimony, he was acquitted.

Wilkinson was one of the most trusted soldiers in U.S. Army history, serving in both the Revolutionary War and the War of 1812. He took on the role of governor of the newly-acquired Louisiana Territory and became one of the Army’s most senior officers. There were many problems with Wilkinson’s service but the foremost among them was that he had been spying for the Spanish most of the time.

When his role in Aaron Burr’s own treason was nearly discovered, he placed New Orleans under martial law and imprisoned anyone who might be able to prove Wilkinson was complicit in the plot. Wilkinson was never caught during his life, but his papers were discovered in 1854, leading Theodore Roosevelt to say, “In all our history, there is no more despicable character.”