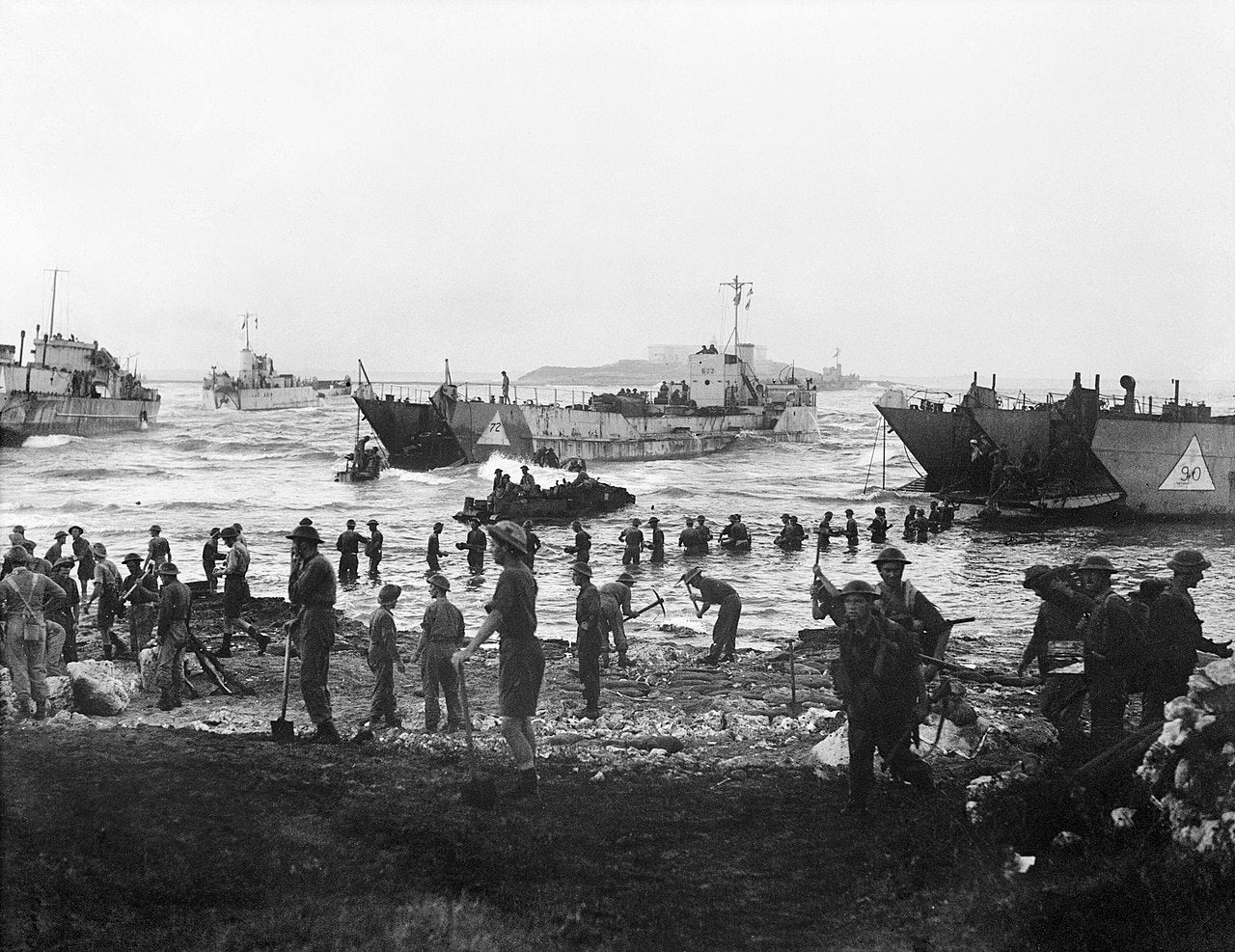 Troops from the 51st (Highland) Division unloading stores from tank landing craft on the opening day of the invasion of Sicily, 10 July 1943.

Three years earlier Italian dictator Benito Mussolini gave the order to invade Libya and take North Africa for himself. The allies were able to take back the territories conquered by General Erwin Rommel. The Allies were able to smash through the Italian armies but Rommel’s Afrika Corps was a different story. Three bloody years of logistical problems gave the allies and opportunity to turn raw troops into lethally coordinated elites. Generals Patton and Montgomery pushed the Nazi and Italians into the sea. Back home Americans would learn about the war through newsreels. This is how the public learned about the liberation of Sicily.

The Invasion of Sicily

Newsreels brought the war from the frontlines to the silver screen. The newspaper and radio were the primary way Americans kept informed about the war but newsreels offered exciting moving images. The Office of War Information accomplished President Franklin D. Roosevelt’s goal to connect the American people closer to the war by covering six specific aspects: ‘the issues of the war, the enemy’s goals and characteristics, the concept of the Allied coalition, the importance of domestic production, the role of civilians on the home front, and the realities faced by the fighting men’. They were responsible for keeping the public informed and prevent criticism of the Armed Forces. The newsreels highlighted allied victories but would keep the most devastating parts of the war more palpable. Once a week, United News brought the stories of those fighting for freedom to audiences.

Italy was regarded as Europe’s soft underbelly and General Patton wanted to hit them where it would hurt the most. There was a chain reaction from North Africa, through Sicily, that brought down an Axis power to it’s knees. The momentum of earlier victories helped power the image of America as this steamroller of freedom flattening fascism all around the world. The myth of Nazi supermen had been fractured and America had proven without a doubt that they could be defeated.

Between 750,000 and 1.5 million people of Italian descent are thought to have served in the war, and 14 Italian Americans received the Medal of Honor for their service.

Americans also had another reason to tune into the news about the liberation of Sicily; family. Italian-Americans faced bigotry and distrust during the war. The government viewed anyone of Italian, Japanese, or German ethnicities as a security risk. They were also subject to the racial slurs that they had been subjected to since the late 1800’s when their immigrant ancestors arrived at Ellis Island. Italian Americans were scared to discuss politics in public for fear of arrest. Yet, many of the Italian-American troops taking part in the liberation of Sicily served as translators. Their close ties to the old country allowed them to tap into the local populace and extract actionable intelligence. This cultural wealth of knowledge contributed to less abrasive relationships between the military and the civilian population which in turn kept resistance to a minimum.