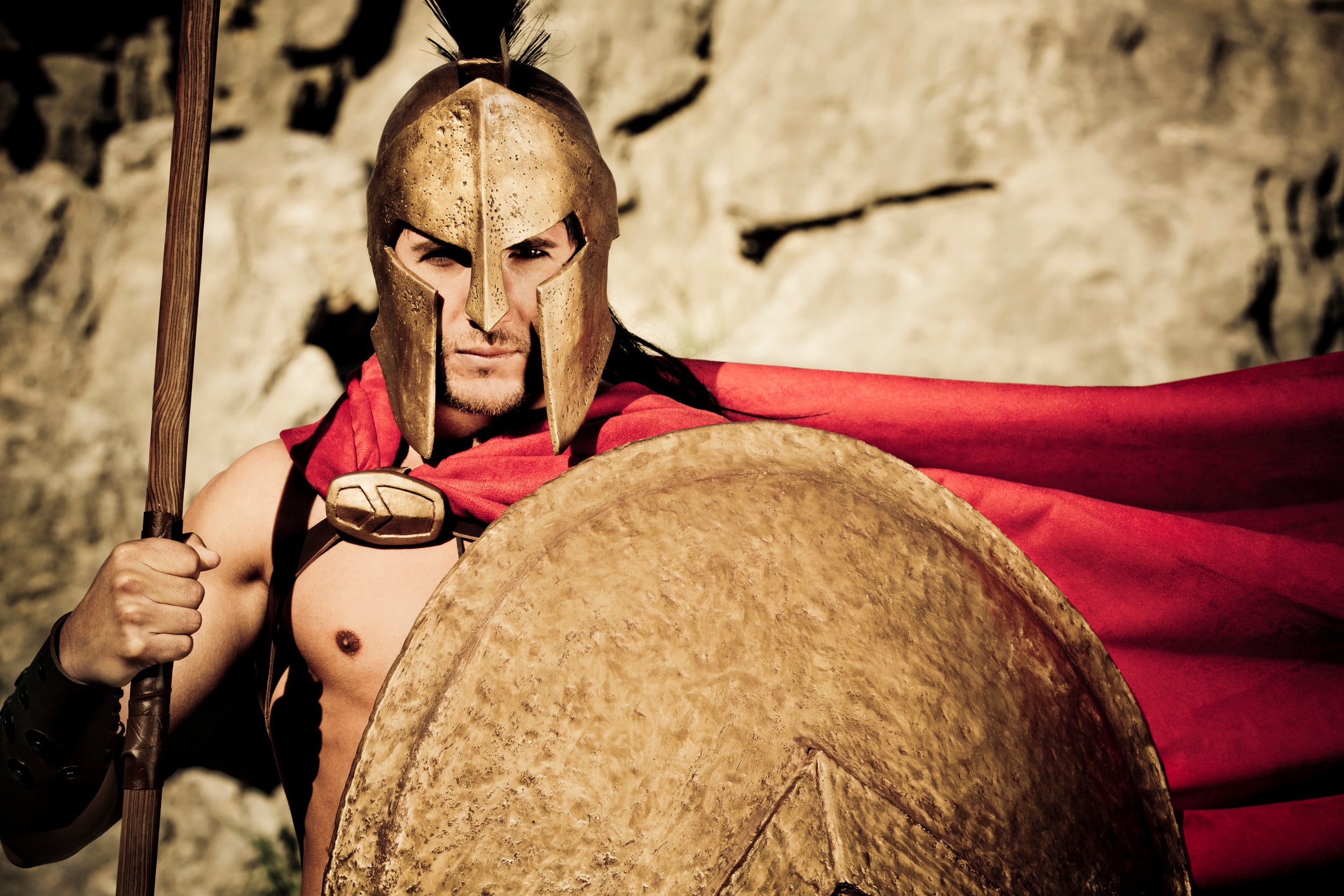 "Portrait of Spartan warrior with selfmade theater clothings and with original spartan symbol, adopted in the 420s BC, was the letter lambda (a), standing for Laconia or Lacedaemon, which was painted on the Spartans' shields and broochs,selective focus, very creative sepia - color retouching to underline the ancient time,vignetting and added noise".

In the ancient Greek imagination, the Spartans were considered the best of the best. A Spartan knew the difference between right and wrong, and he never chose wrong. He was always pious toward the gods, he said little but made every word count and he would rather die in a losing battle than come home in defeat. Under Spartan law, it was illegal to surrender. Creating a Spartan man was a process that took more than two decades and cost many lives. Here are 6 things to know about the agōgē, the education of the ancient Spartans.

When a male child was born in Sparta, he would be bathed in wine to test his strength. The Spartans believed that weak babies would react poorly to the wine and convulse or cry. Those infants which failed the test would either be left to die, or would become a slave. If a child passed the test, it would be examined by the Gerousia, the council of elders; a child born with defects would be deemed unfit and left to die. Those children that survived would be raised in their family households, where every day their parents would drill into them the need to put Sparta before themselves.

At the age of seven, a Spartan boy would leave his family’s home for the last time. He and the other boys would enter the agōgē, the training program where he would spend the next twenty-three years of his life. The boys were assigned to an ilea, a group of sixty boys under the watchful eye of an eiren; the eiren were in their twenties, further along in their education but not full Spartan citizens. The eiren would train the children’s bodies with sports, races, and all kinds of exercises, and would train their minds with history, politics, and literature. Spartans were also trained in the art of wit, to make them careful with their choice of words and allow them to talk down to other Greeks.

3. Children were impoverished to make them tough

The Spartans wanted to create soldiers who would never complain about the harsh conditions of war. Boys foraged their own reeds to weave their own beds, teaching them to be comfortable sleeping anywhere. They were deprived of clothing to make them comfortable in the boiling heat and the freezing cold. Children were deprived of food to make them familiar with hunger, but implicitly encouraged to steal food in order to make them stealthy; a boy who was caught would be whipped without mercy. Spartan boys were trained to be expert survivalists before they even finished puberty. (Some said that Spartans loved war so much because campaigns were less strenuous than their own training!)

4. A Spartan’s life revolved around his mess

When a Spartan man turned twenty, he would start applying for entry into a syssitia, a small club of men who ate all their meals together. This was the core of Spartan society; a man needed the unanimous consent of all members of the syssitia to join. If a man was unable to persuade a syssitia to accept him before he was thirty, he could not become a full citizen of Sparta. According to Spartan law, Spartans had to eat all their meals with their syssitia to encourage comradery. This created extremely strong bonds between the soldiers, and excluded everyone who could not meet the standards the Spartans set for themselves.

Young Spartans who proved themselves worthy were allowed to join the Crypteia, a secretive order which was responsible for oppressing the helots. The helots were the slaves of Sparta; the state owned the helots as public property and distributed them to Spartan families. Every year the Spartans declared war on the helots, allowing them to murder their slaves with impunity. Members of the Crypteia were sent into helots’ lands, to camp out and keep a watchful eye; those helots who seemed dangerous were to be killed before they could become a threat to the Spartan regime.

6. A Spartan’s education did not end until he was thirty

At 30, a Spartan man could become a full citizen who was allowed to marry and hold public office. He and his wife would be provided with a house, a farm and helots by the state, so the Spartan men could spend all their time on training for combat rather than worry about economic matters. For the first time since he was a child, a Spartan man would live under a private roof, though he would still eat all his meals with his syssitia.

At last, he was a Spartan man.