Coffee alternatives that were used during the Civil War 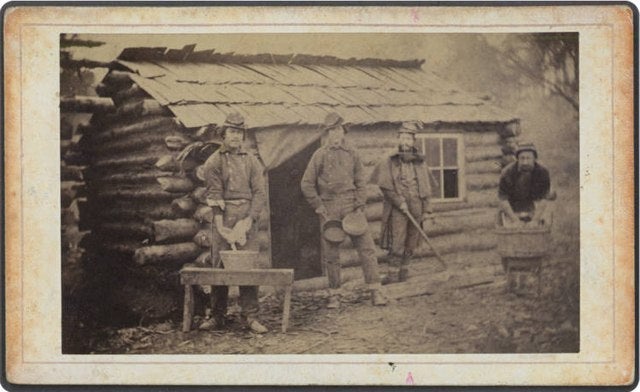 Soldiers of the First Texas Infantry, Confederate States Army, Dumfries, Virginia. It is thought to be by Solomon Thomas Blessing, a soldier from Galveston in General John Bell Hood's Texas Brigade, of troops during the winter of 1861-1862. One of the soldiers is Private Joseph Nagle from Austin.

“Nobody can soldier without coffee.” This is a statement written in the New York Times outlining just how important Joe was during the Civil War. Aside from being a source of delicious comfort and a daily norm in today’s time – 50% of all Americans indulge in coffee – it was far more than that in times of the Civil War.

It was a truth that came to light in 1832, when President Andrew Jackson dictated coffee and sugar be available as daily rations to soldiers. (Taking the place of their daily whiskey ration permanently in 1837.) Coffee was easy to transport, it didn’t spoil, and it came with many benefits. Coffee kept soldiers warm, it recharged their batteries, and it was a source of happiness in otherwise terrible conditions. The use of coffee was so common it was made with whatever supplies were nearby. That includes puddle water filled with mud that horses wouldn’t even eat.

With so much coffee consumption, however, soldiers quickly ran out of the beans themselves. Food supplies were rationed to begin with, and their over-consumption lead to java being in high demand.

How Civil War soldiers made their own coffee

First, soldiers wrote that they tried rationing their coffee supplies by mixing it with other things. In Little Rock, AK in 1861, one soldier mentioned mixing his brew with cornmeal. The concoction took half the coffee and cost 12.5 cents for the pot.

However, before long, especially in the South, coffee was not in short supply, but nonexistent. President Abraham Lincoln put a blockade on the Southern seaports, and no new coffee was brought in.

Instead, soldiers began using different items to roast, grind, and mix as a hot beverage. Some of their coffee alternatives included:

Usually the concoction at hand was determined by what was available at the time. Confederate soldiers called their homemade brews, “Lincoln Coffee,” citing the president who cut off their supply to the real stuff.

There’s even a report of using old cigars … yuck!

“—To Make Coffee.—Take tan bark, three parts; three old cigar stumps and a quart of water, mix well, and boil fifteen minutes in a dirty coffee pot, and the best judges cannot tell it from the finest Mocha.”

Most other recipes involved chopping or breaking up the items, roasting them, then adding hot water and boiling to allow a through steeping.

But it wasn’t just soldiers who were making due with their own homemade java blends, it was Southern families. As they too could not receive new supplies, women and others at home soon ran out of coffee and sunk to the same experimental recipes. While many soldiers reported that their recipes were good, most women wrote letters and in their diaries that the beverages were less than desirable.

A visiting British officer, wrote in 1863, “The loss of coffee afflicts the Confederates even more than the loss of spirits. They exercise their ingenuity in devising substitutes, which are not generally very successful.”