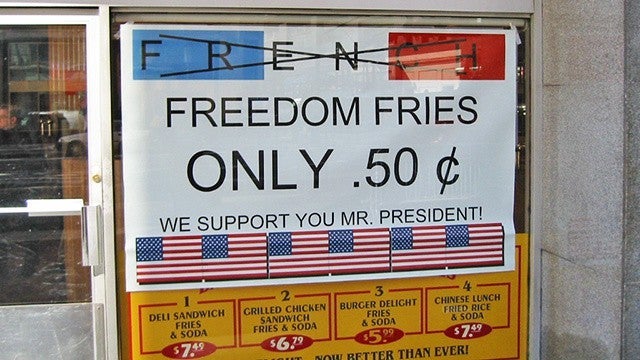 The United States and France do not always see eye-to-eye on military matters. In 1966, French President Charles de Gaulle pulled France from NATO during the height of the Cold War to preserve French independence. (Nicolas Sarkozy rejoined the alliance in 2009.) France tested nuclear devices well into the 1990s, decades after most of the other nuclear powers signed the Partial Test Ban Treaty in 1963. Most recently, France begged off on joining the U.S.-U.K. “Coalition of the Willing” to oust Saddam Hussein in Iraq.

And because of the world wars of the 20th Century, the French military tends to be seen with disdain. The French didn’t fare so well in World War I, as the Germans’ drive through Belgium resulted in much of the fighting being done on French soil. The inability to repel the German forces made the French seem weak. Truthfully, it was a multinational force who failed to expel the invaders, so it’s not entirely France’s fault. And then of course, the quick capitulation and subsequent collaboration of France to the Nazis in World War II gave them the reputation they have today.

The truth is the French armed forces are much more aggressive and capable than these few events would have you believe. Aside from the French Foreign Legion, who are noteworthy in their own right, France projects military power all over Europe, Africa, and Asia, and they’re really good at it. They just have a bad rep. It was the French, led by Charles Martel who kept the Muslims from conquering Western Europe at the Battle of Poitiers in 732. Since then, the French have had their wins and losses, just like anyone else.

In WWII, Free French forces had the élan to fight their own countrymen who had sided with the collaborationist Vichy government. Free French troops worked in concert with the British and Americans throughout the war. Those who could not escape the fall of France in 1940 fought on as partisans for four years under the Nazi occupation, assisting with U.S. and British intelligence operations, assassinations, sabotage, and were essential to planning the D-Day invasions. The operators of the French Résistance are symbolic of underground resistance movements to this day.

After World War II, the French experienced a number of setbacks in its former colonies, most notably in French Indochina (aka Vietnam – and we in the U.S. know that war wasn’t as easily winnable as it might have seemed at the time), and in Algiers, where the independence movement led to a series of bloody, brutal attacks and counter attacks between French forces and the Algerian rebels. Since then, France has been resolute in its ideals and willing and able to back up those ideals with military force.

In response to the Nov. 2015 attacks on Paris from ISIS (Daesh), France immediately launched at least 30 air strikes against the de facto ISIS capital of Raqqa alone. French audacity led the way for the U.S. to hit ISIS oil facilities in Iraq and Syria, a main source of the terror group’s operating funds. The nuclear-powered French carrier Charles de Gaulle is currently en route to the Mediterranean to support anti-ISIS operations.

The Charles de Gaulle led an expedition of the one-fourth of the French Navy that supported operations in Afghanistan. The French launched 140 air strikes to support operations on the ground during the 2001 invasion as well as lending its recon aircraft to support U.S. special operations forces and then conventional forces in Operation Anaconda. French ground forces have been in Afghanistan since 2010, and 88 troops died there.

France is especially active in its former African colonies. During the 2004 Ivorian Civil War, the French sent 2,500 troops to keep the peace and prevent the sides from slaughtering each other. When French and Western civilians were rescued by French military helicopters as mobs of Ivorians raided Westerner’s homes. When Ivorian government forces, ostensibly under the guise of attacking rebel positions, hit a French base in Bouaké, killing nine and injuring 31, the French retaliated by an overland march on Yamoussoukro airport, taking out much of the Ivorian Air Force on the ground, and then capturing the country’s main airport in Abidjan.

The French returned to Ivory Coast in 2011 to finish off president Laurent Gbagbo, who refused to concede his election loss . The French ousted Gbagbo and arrested him, then subdued mercenaries hired by the former president.

That same year, French forces intervened in Libya to recon the country and take out artillery and armor bound for dictator Muammar Qaddafi’s effort to fill the streets of Benghazi with “rivers of blood.” France also assisted with the imposition of NATO “no-fly zones,” giving Libyan rebels the air support needed to even the odds of the war against Qaddafi’s regime.

In 2012, an Islamist group in Mali called Ansar Dine backed Tuareg tribes and secular militia in declaring independence in the Northern area of the former colony of France. They quickly captured three of the country’s largest cities and imposed strict Sharia law. The power vacuum attracted insurgents and jihadists from other Islamist groups, including al-Qaeda in the Islamic Maghreb. The Malian government fell in a coup led by Malian troops unhappy with the government’s handling of the crisis.

Once a civilian interim government was re-established in the capital of Bamako, Islamist militants began to push toward the country’s center, and the French sent in the marines. French airstrikes stopped the Islamist advance and French troops helped the Malians recapture the vital city of Konna. By the time the French and Malians reached Timbuktu, Islamist resistance faded to nil. The entire operation took six months.