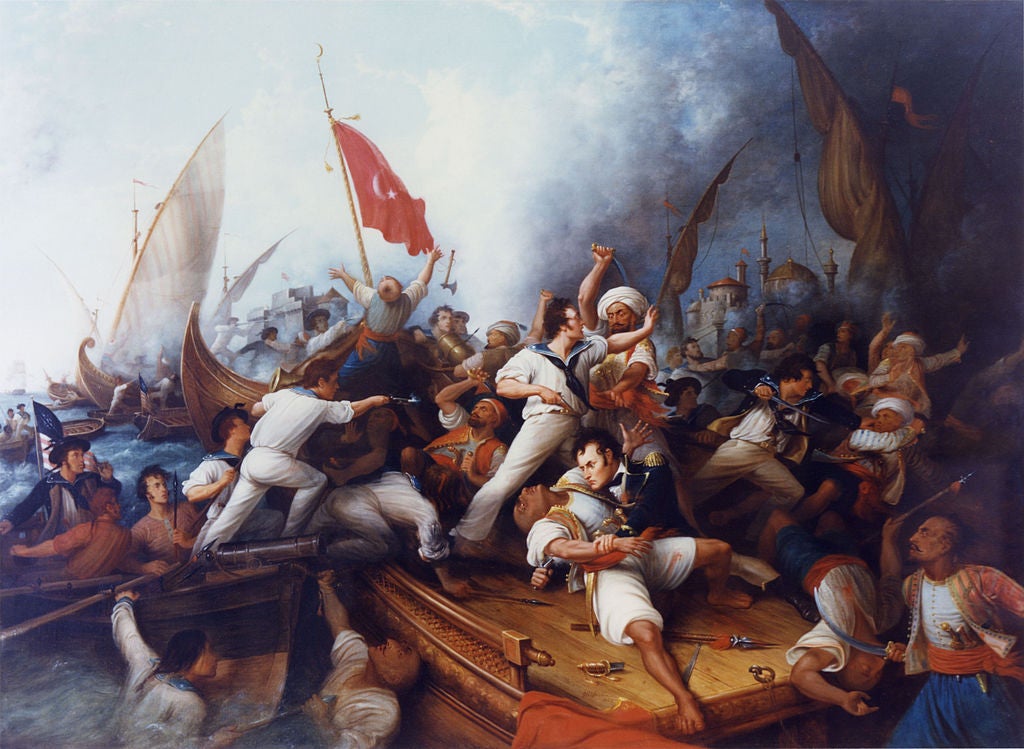 A daring raid launched to recover or destroy a captured ship 212 years ago marks the most celebrated episode of the United States first overseas military operations. Lieutenant Stephen Decatur and a small group of volunteers composed mostly of U.S. Marines covertly entered the port of Tripoli and successfully burned the captured USS Philadelphia.

Corsairs from what were known as the Barbary States, composed of of Morocco, Algiers, Tunis, and Tripoli, had been ravaging the Mediterranean for centuries, capturing merchant vessels and enslaving or ransoming their crews. Some estimates place the number of Europeans sold into slavery between the 16th and 19th centuries by the Barbary pirates at well over a million.

American shipping had traditionally relied on British naval protection, but following the American Revolution the British let the Barbary States know that U.S. vessels were fair game. In 1785 Dey Mohammed of Algiers seized several American vessels and held their crews for ransom. The weak U.S. government at the time could not raise the money or the naval power to get the sailors back.

Though the U.S. managed to successfully conclude a treaty with Morocco, it wasn’t until until 1795 that an agreement to pay exorbitant tribute to Algiers, Tripoli, and Tunis bought the captured sailors back. These tributes and later payments eventually began to consume up to 10 percent of the national budget.

Due to the situation with Algiers, Congress had authorized the construction of the first six ships of the U.S. Navy. When Tripoli declared open season on U.S. ships in 1801 over late payments of tribute, newly elected President Thomas Jefferson dispatched a small fleet to enforce a blockade of Tripoli and sent envoys to Sicily in order to secure a base to operate from.

After several skirmishes the U.S. Navy was largely able to maintain the blockade, its ships unchallenged at sea. But in October of 1803 the brand-new frigate USS Philadelphia ran aground a reef while patrolling the port of Tripoli. The captain and crew were captured and taken ashore for later ransom, and the Philadelphia was anchored in the harbor.

In order to deny the use of the Philadelphia to Tripoli, Lt. Decatur, commander of the schooner USS Enterprise, came up with an elaborate plan. A small vessel from Tripoli had recently been captured and rechristened as the USS Intrepid. Decatur would disguise the Intrepid as a regular merchant ship, enter the harbor at night, and lead a small force of mostly U.S. Marines to recapture or burn the Philadelphia; a raid. The USS Syren would stand by to offer fire support.

On the night of Feb. 16, 1804, the raid plan was a go. Sicilian volunteers who could speak Arabic functioned as pilots for the Intrepid, and they called out in Arabic as the Intrepid entered the harbor to allay the harbormasters suspicions. Decatur and his men were disguised as Maltese seamen and Arabs.

When the Intrepid pulled alongside the Philadelphia, they took the Tripolitan guards completely by surprise with swords and boarding pikes. Without the loss of a single man they recaptured the ship, killing many of the guards and sending the rest overboard, but the Philadelphia was in no condition to return to sea. After the raiders set the Philadelphia on fire, they reboarded the Intrepid and made their escape as the Syren and Tripolitan shore batteries exchanged fire. The operation had been a spectacular success and was widely celebrated back home.

The U.S. ransomed the crew of the Philadelphia back in 1805, and Decatur went on to have a distinguished career through the War of 1812, and as fleet commander led a second operation against the Barbary States in 1815. After defeating the Dey of Algiers, Decatur negotiated a series of treaties that ended the Barbary threat to U.S. ships for good, and marked the end of one the first overseas operations by the United States. Even today, the raid is one of the most memorable in US history.