History of the Second Battle of Fallujah - We Are The Mighty

Everything you need to know about the Second Battle of Fallujah 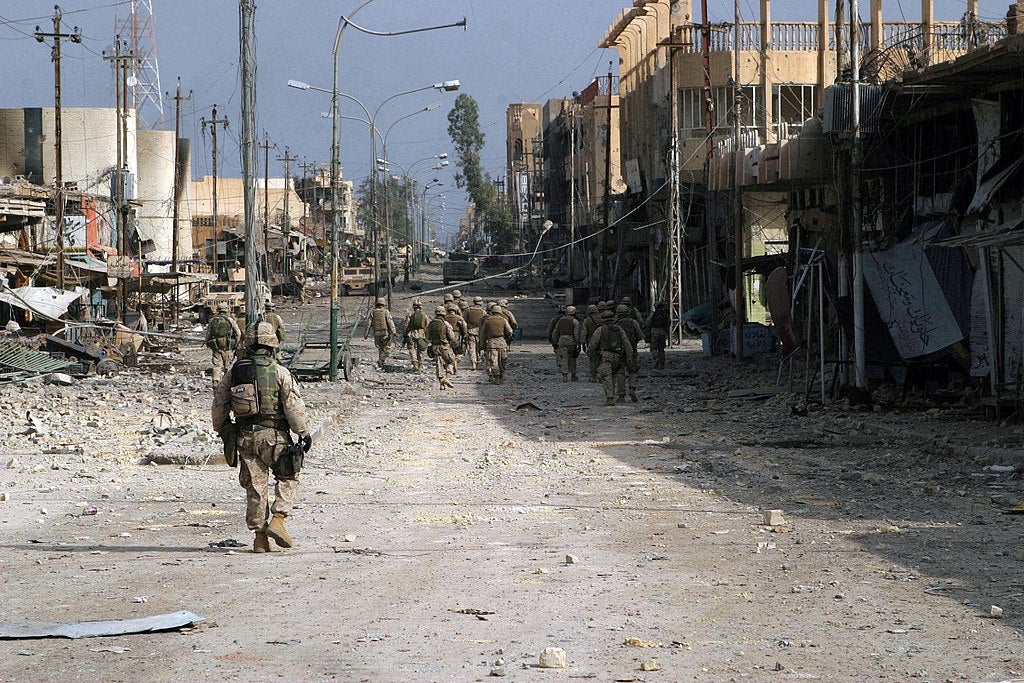 Also called Operation Al-Fajr or Operation Phantom Fury, the Second Battle of Fallujah took place from November 7, 2004 until December 23, 2004. During this battle, joint American, Iraqi, and British forces attacked Islamic insurgents in the Sunni province of Al-Anbar. Both the Marines and the Army led coalition forces. Many historians considered the Second Battle of Fallujah the heaviest urban combat experienced by American service members since the Battle of Hue City in Vietnam in 1968.

Many consider the Second Battle of Fallujah the bloodiest battle of the Iraq War for American service members. It’s also historically significant because it was the first major engagement of the Iraq War fought exclusively against insurgents and not against the government military forces.

Before the First Battle of Fallujah, both the 82nd Airborne Division and the 1st Marine Division controlled the city.

After the deaths of four Blackwater contractors in March, American political leaders requested a significant response.

So, within days, the 1st Marine Division launched Operation Vigilant Resolve to take back control of the city, and the First Battle of Fallujah was underway. Then, insurgent forces started stockpiling weapons and building defenses across the city. Control of the city went to a local Iraqi-run security force.

The November follow-up campaign aimed to retake the city and prevent further opposition to the US-led occupation of Iraq.

Nearly 13,500 service members were on hand for the Second Battle of Fallujah. Of those, Marines totaled about 6,500, Army totaled around 1,500, and the Navy had 2,500 sailors on hand. American troops included the Regimental Combat Team 1 and Regimental Combat Team 7. Marine fixed and rotary-wing aircraft, Navy and Air Force fixed-wing aircraft, and Sniper Elements supported the ground troops.

American and Iraqi forces established checkpoints around the city to prevent anyone from entering and to catch those trying to flee. Intel from overhead imagery helped create maps of the city. An air strike and artillery campaign lasted several weeks. However, unlike other Iraqi cities, the Battle of Fallujah did not include internal disputes between insurgents. Insurgents and Mujahideen fortified defenses in advance of the attack by digging tunnels and trenches. They built and hid countless IEDs and prepared spider holes. In some locations, homes were filled with propane, drums of gasoline, and ordnance wired by a remote trigger. Insurgents booby trapped buildings and vehicles. Bricked off stairwells limited American exit strategies.

SEAL and Marine Recon sniper teams provided recon and target marking. Then, ground preparations started on November 7, 2004. The Iraqi 36th Commando Battalion and their Army Special Forces, Marine Scout Platoon, SEAL, and Naval Special Warfare advisors engaged the enemy on the peninsula. The Fallujah General Hospital, ING, and several villages opposite the Euphrates River and Fallujah’s western side were captured relatively quickly. All of these tactics were a diversion to confuse the enemy ahead of the all-out offensive. Two Marines died during this initial offensive.

The six U.S and Iraqi battalions moved into the city at nightfall, and the assault began on November 8 at dawn. After nearly 2,500 155mm projectiles were fired, the coalition attacked the central train station. This was then used as the main staging area for all follow-on forces. By the afternoon, Marines entered the Hay Naib al-Dubat and Al-Naziza districts. Shortly after, Navy Seabees followed to clear the streets of debris. By nightfall, Marines reached Highway 10 in the center of the city.

Most of the fighting finished by November 13. However, Marines and Special Forces faced isolated resistance for several days after. Sporadic fighting continued until December 23, 2004. By January 2005, units had left the area.

The Second Battle of Fallujah was the bloodiest battle of the Iraq War. When the operation officially ended in December, final counts showed 95 service members killed and 560 wounded. Fallujah suffered extensive damage. Almost 60 of the city’s famed 200 mosques were destroyed.

After this operation, insurgent attacks gradually increased in and around the city. A third push to retake the city started in September 2006 and lasted until the middle of January 2007. Often called the Third Battle of Fallujah, the 2006-2007 offensive included Ramadi and surrounding areas. After four years of fighting, Fallujah returned to Iraqi hands in the autumn of 2007. In early 2014, al-Qaeda-linked insurgences from the Islamic State of Iraq, and the Levant took control of the city. Two years later, the city was reclaimed by Special Operations Units and the Iraqi Army.

As with many battles fought during OEF and OIF, there are no national observances to honor those who lost their lives in the Second Battle of Fallujah. Units that participated in the Second Battle might hold internal observances to commemorate those who died. Notably, the DoD has only awarded 16 Medals of Honor to War on Terror veterans. Here’s a list of several service members who many believe deserve America’s highest honor.

Monuments dedicated to the Second Battle of Fallujah

A monument at Camp Pendleton honors the Marines who fought in the Battle of Fallujah. The statue is at the Wounded Warrior Battalion West complex on base. It’s based on a Lucian Read photo of two lance corporals carrying an injured sergeant out of a house in Fallujah. Hope for the Warriors, a national non-profit donated the statue. A similar monument exists at Camp Lejeune.

Currently, there are no large-scale monuments at the National Mall to honor Operations Iraqi Freedom, Operation Enduring Resolve, or any other campaigns associated with the wars in Iraq and Afghanistan veterans. In 2022, President Joe Biden authorized a bill that approved the construction of a memorial on the National Mall dedicated to those who participated in and sacrificed for America’s longest war. Find out more about the memorial plans here.

Frequently Asked Questions about the Second Battle of Fallujah

How long did the War in Iraq last?

What was the cause of the Iraq War?

When was the war in Afghanistan?

How many Americans died during the Global War on Terror?

More than 59,000 service members were wounded or killed during the Global War on Terror.