That time one Egyptian soldier held off an entire Israeli advance 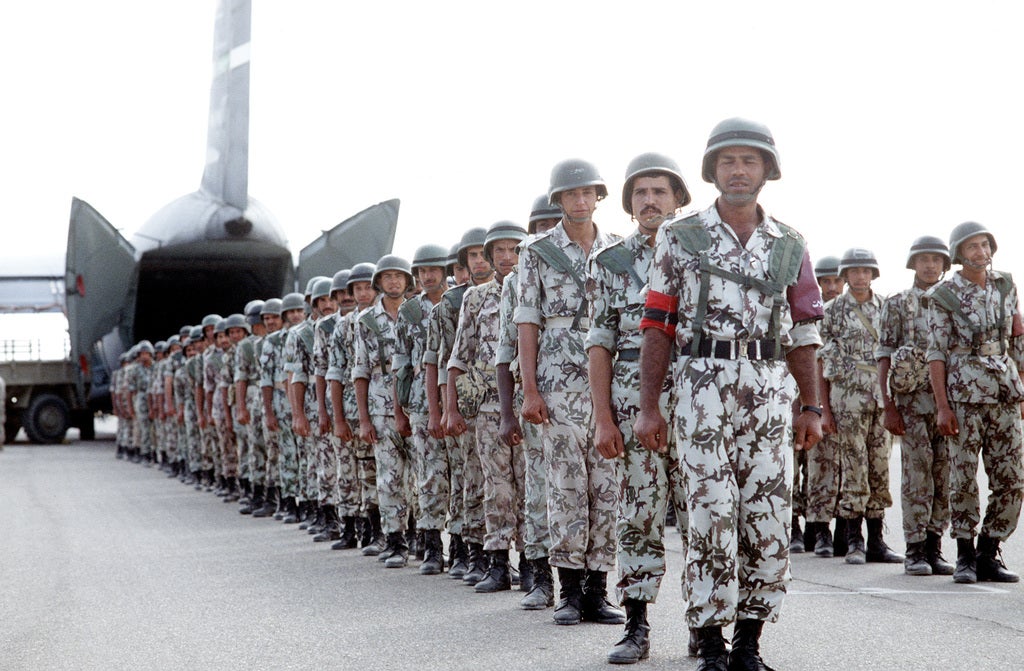 Egyptian Army paratroopers wait in a double line to board a C-141B Starlifter aircraft assigned to the 7th Airlift Squadron from McChord Air Force Base. The troops will be practicing parachute jumps from the aircraft.

History is written by the victors, so we don’t hear a lot of stories from the armies of those who lost the war. For stories of heroism to spread, it’s essential that some of the losers survive in combat to tell those stories.

But the story of Sgt. Sayed Zakaria Khalil is said to have spread, not because of his fellow Egyptians, but  because of the Israeli soldier who killed him in combat.

In 1973, Egypt and Syria launched a surprise attack on Israel during the Jewish holiday of Yom Kippur, Judaism’s holiest day. The idea was to get the jump on Israel, sneak attacking them the way the Israelis had attacked Egypt in the 1967 Six Day War. That was when Israel had captured the entirety of the Sinai Peninsula from the Egyptians and Egypt wanted it back.

At first, the move worked. At first.

Soon, however, the Syrian fighters in the Golan Heights began to crumble and the Israel Defence Forces (IDF) entered Syrian territory. The Israeli focus soon shifted to the Egyptians. Egypt made quick gains in the Sinai but were about to feel the IDF for the first time during the war.

Egypt lasted much longer than they did in 1967, but not by much, on the scale of wars. And it didn’t end well. The entire war went almost three full weeks, and Israel’s troops not only crossed the Suez and entered Egypt, they came within six miles of the Egyptian capital.

It was another rout for Egypt, but there was one thing they could be proud of: Sgt. Sayed Zakaria Khalil.

What does it say about a single soldier that can handle a superior force (in numbers, technology, and training) as the rest of his unit fades away? The Israelis were already on the move and the Egyptian army needed time to escape back across the Suez Canal when the 24-year-old Egyptian paratrooper landed along the other side of the Mitla Pass in the Sinai, near Mount Jalala.

The Egyptian Army needed a full extra day to escape across the Suez and return to Egypt or they would be destroyed in the Sinai. It was up to Sgt. Khalil’s unit to give them the time.

Khalil was waiting for the Israeli advance at the pass and, having traded his food for ammunition due to Ramadan fasting, felt he was as ready as he would ever be. Soon, IDF tanks came rumbling into the area.

Under the cover of darkness, he and four others attacked and disabled 7 Israeli tanks before blending back into the mountainside.

Now that the Israelis were aware of the Egyptian presence, they dropped paratroopers of their own in to eliminate the threat. This is where accounts get murky.

Some say Khalil and his fellow paratroopers were attacked by 100 IDF troops. Some accounts say Khalil shot down an Israeli aircraft from the ground. Some accounts say he destroyed 3 tanks and killed 22 enemy soldiers. What is clear is that Khalil fought the Israelis for hours, until he was the last Egyptian in his unit still alive.

According to one Israeli account, Sgt. Khalil took a position that allowed him to fend off and kill 22 Israeli troops before being overcome by machine gun fire himself. That account came from the Israeli who killed Khalil.

The Israeli is said to have picked up Khalil’s belongings, impressed by the defense of the soldier. He then buried his fallen Egyptian adversary and fired a 21-gun salute into the air.

These days, not much is written about Sgt. Khalil and his suicidal stand near Mount Jalala. A city street in Cairo that bears his full name and the 2016 Egyptian war flick “Lion of Sinai” are his enduring legacy.