The crazy way the Royal Navy killed Blackbeard the pirate 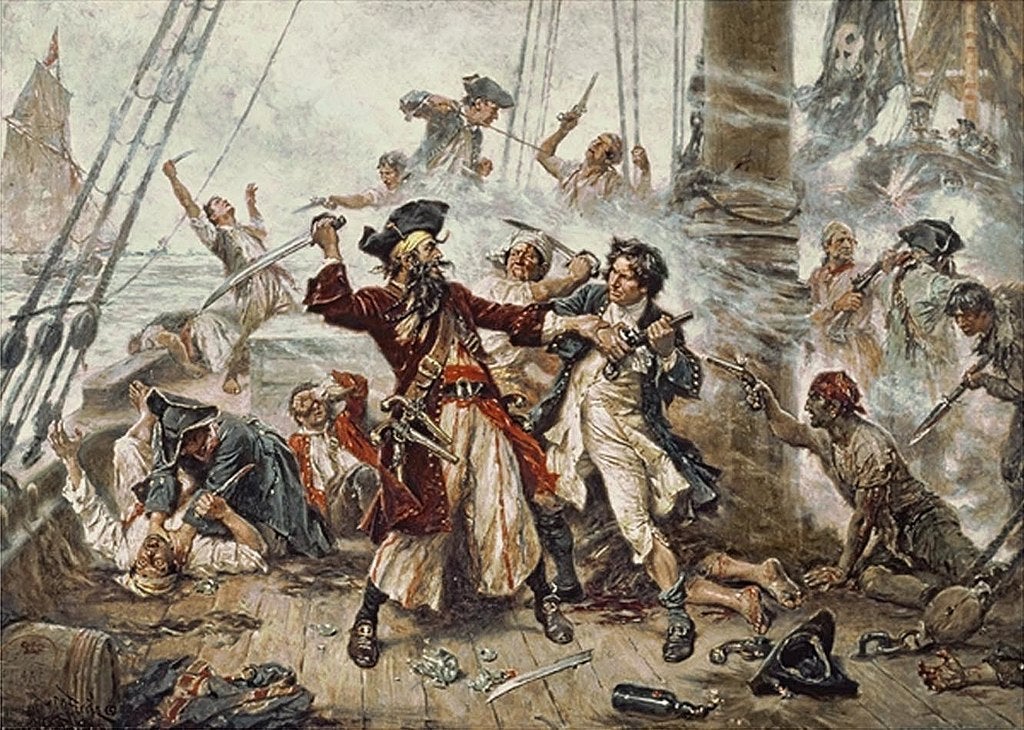 Capture of the Pirate, Blackbeard, 1718 depicting the battle between Blackbeard the Pirate and Lieutenant Maynard in Ocracoke Bay.

Edward Teach was only a notorious pirate for two years, but in that time, he made a reputation for himself that lives on to this day. Aboard his flagship, Queen Anne’s Revenge, he captured heavily-armed merchant ships throughout the Caribbean, ransacked the ships, captured the crews and their cargo and generally wreaked havoc on shipping in the entire area.

Dubbed “Blackbeard” by a captain whose ship he captured, he leaned into the captain’s evil description of the pirate. He was described as going into combat wearing “a sling over his shoulders, with three brace of pistols, hanging in holsters like bandoliers; and stuck lighted slow matches under his hat.”

On top of his fearsome appearance and reputation, one might be crazy to try and attack his flotilla of pirate ships. But that’s what a navy is paid to do, and Blackbeard wound up on the wrong side of the British Empire.

Capt. Robert Maynard spent much of his career as a lieutenant in the Royal Navy. Not much is known about his life before his naval service, but the navy is where he made a name for himself. He was a 34-year-old lieutenant in 1718, at a time when England still controlled the American colonies, France was a major naval power, and Spain was still sending galleons of gold back to Europe.

It was those French merchants and Spanish gold fleets that attracted pirates like Blackbeard. Fearing for English merchantmen operating in the Caribbean, the governor of Virginia tasked Maynard to hunt down and kill the notorious pirate and destroy his fleet of pirate ships.

To accomplish this feat, Maynard was given command of two sloops of war by the Governor of Virginia, Alexander Spotswood, in November 1718. But Maynard and his ships didn’t have to sail that far. He encountered the famous pirate and his ships off the coast of North Carolina, near Ocracoke Inlet just days after departing from Virginia.

When the British caught up to Blackbeard, both sides of the coming battle were at serious disadvantages. The vast majority of Blackbeard’s men were on shore at the time, as Ocracoke Inlet was (and still is) an undeveloped barrier island. It was supposedly a safe place for a pirate crew to find some time on land.

Maynard had the advantage of outnumbering the pirate fleet three-to-one with a superiority in arms. Unfortunately for Maynard, his disadvantage was that his men had the only guns. His ships had no cannons, while Blackbeard still had eight. Maynard would have to fight with only small arms, meaning he would need to close the distance between them and board the ships before the pirates could bring their ship’s guns to bear.

The British were too slow. Maynard put most of his men below decks to hide their numbers and headed straight for the pirates, but was grounded on a sandbar. The grounding allowed Blackbeard to fire a broadside at the incoming Royal Navy. Maynard began throwing everything of substantial weight overboard to free his ship as Blackbeard moved into shallower waters. Blackbeard poured two broadsides into the ship, killing many of the men on deck. The pirates then boarded Maynard’s sloop, believing there were only a handful of men left alive.

The pirates were quickly overwhelmed by the hidden soldiers below decks, but Maynard and Blackbeard still ended up fighting each other. The two shot at one another at point blank range, but Blackbeard missed, Maynard did not. Still the pirate walked up to Maynard and broke his sword. Just before he could strike a death blow, another sailor came up behind Blackbeard and mortally wounded him. Maynard finished him off.

When all was said and done, it was discovered that Blackbeard had been shot five times and stabbed twenty times. The pirate’s head was cut off and displayed on the bowsprit of the HMS Jane for the trip back to Virginia.