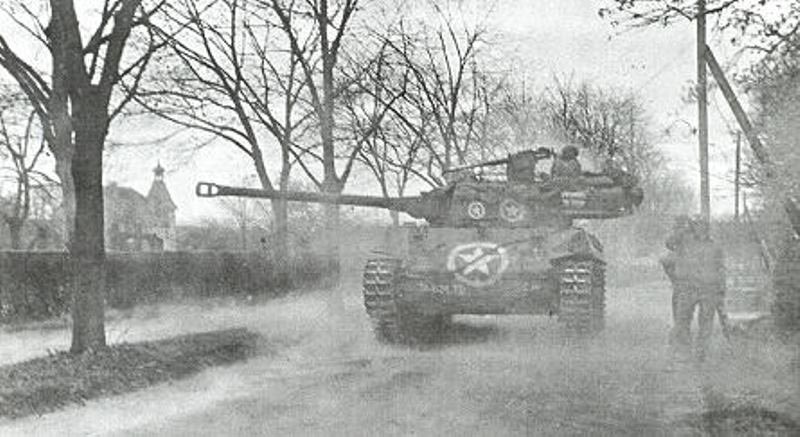 To counter the German blitzkrieg, the U.S. Army needed to not only destroy individual tanks, it needed to destroy the Wehrmacht’s ability to use them effectively. To do that, it created an entirely new doctrine of mechanized warfare: tank destroyer forces.

In order to ambush massing enemy armor as it attempted a breakthrough, the Army needed a powerful, fast, armored vehicle that  would ride out to meet an armored attack while setting enemy tanks up to be ambushed at the same time.

The result was the M18 Hellcat, the fastest armored vehicle until the development of the M2 Abrams, and the most effective anti-tank weapon of World War II.

Before the time the United States entered World War II, it did not have an army that could effectively face everything the Nazis were using in Europe, so a number of technological innovations had to be created. One of those needs was a way to stop massed armor formations from breaking through the battlefield.

The need was to create a weapons system that could stop heavy German tanks without getting blown away themselves. It needed enough armor so that enemy infantry couldn’t neutralize it on their own and it needed enough speed to move when it had to. It also had to be able to kill German tanks.

More than a dozen models were developed by American manufacturers to meet these Army requirements, but as one need was met, another need would soon arise. Armor was soon sacrificed in favor of speed and mobility, its main turret was soon upgraded with the Sherman tank’s 76mm turret, and the M18 Hellcat was deployed in the field before it could be standardized.

Hellcats first saw action in the Italian campaign of 1944 but they were already outgunned by upgraded German panzer and Tiger tanks, and particularly vulnerable to those tanks’ main turret rounds.

Nevertheless, the Hellcat was still effective against Axis armor. Even though the armor of German panzers couldn’t be penetrated by the M18 76mm rounds, American tank crews were still able to use the Hellcat to their advantage. The biggest of these was how fast the M18 could take a shot at an enemy tank. When set up for an ambush on the flanks of advancing enemy armor, they were devastating.

American tank crews knew that a well-aimed shot between two specific plates of a panzer’s armor would cause the anti-tank round to ricochet into the enemy vehicle’s driving compartment and kill the crew. The tankers learned this trick in time to meet Hitler’s 1944 armor offensive against Patton’s 3rd Army at Arracourt.

It was at Arracourt that seven M18 Hellcat Tank Destroyers and 25 U.S. tanks  met a force of more than 200 Nazi tanks trying to push Patton back out of the the Lorraine Province of France. Over 11 days, the seven Hellcats destroyed or disabled 39 Nazi panzers.

At the Battle of the Bulge, the Hellcat’s top speed of 50 miles per hour allowed them to get ahead of German armor divisions looking to capture fuel to continue the fighting. This was slowed by Hellcat quickly moving their positions and firing into the advancing enemy.

Although there are successful examples of Hellcats fighting with their designed purpose, in practice, they were normally used to support infantry operations.