The time a nuclear aircraft carrier ran aground right before homecoming 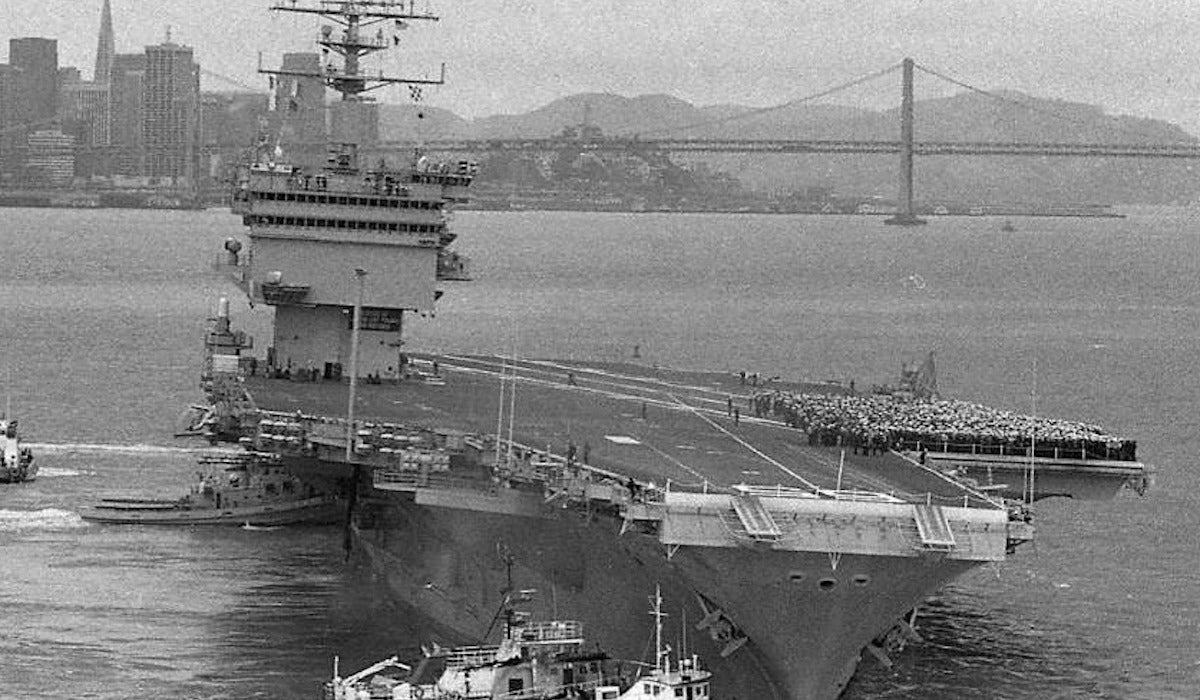 Homecoming for a naval vessel is a huge deal. After months at sea, the ship’s crew don their sharpest uniforms and stand on deck to catch a glimpse of their loved ones before they dock and are finally reunited. Homecomings were an even bigger deal in the days before email, phones, and video calls were more common aboard ships. Imagine, then, the frustration felt by sailors and family members alike when a ship ran aground right before it docked. That was the situation for the crew and family of the USS Enterprise in 1983.

Launched in 1960, USS Enterprise (CVN-65), was America’s first nuclear-powered aircraft carrier. A technological marvel for the time, she served with distinction during the Vietnam War and survived a catastrophic fire in 1969 that killed 27 sailors and injured 314 more. In 1982, Enterprise made her 10th WESTPAC deployment. The ship sailed an eight-month tour before returning to San Francisco in April, 1983.

The carrier sailed under the Golden Gate Bridge at dawn. Enterprise was steered into port by a civilian pilot, but was turned back over to the hands of a Navy pilot before she ran aground. At about 9:30 a.m., the 90,000-ton ship missed the edge of a 400-yard wide, 40-foot deep ship channel while maneuvering through the morning overcast and wind. Enterprise was stuck on a sandbar just 1,000 yards from her berthing.

4,500 sailors and 3,000 family members could now just see each other, but were still far from being reunited. “It was a real drag, being so close and yet so far,” recalled Capt. Jack McAuley, “We couldn’t do anything but sit around and grin and bear it.” The ship’s skipper, Capt. Robert J. Kelly, sprung the crew into action to dislodge the carrier. In an effort to shift the ship’s center of balance, the crew assembled on the port side of the flight deck. Nine military and civilian tug boats joined the effort to free Enterprise. After nearly six hours of rocking, and with the help of the tide, Enterprise made it off the sandbar at 3:12 p.m.

After another 90 minutes of maneuvering, Enterprise was finally docked and her crew was released ashore. Frustration turned to relief as sailors and family members embraced each other after months of separation. Sadly, many crewmen missed their flights out of San Francisco as a result of the ordeal. Ironically, there was one individual on board who was a crewmember of a different Enterprise.

Actor George Takei, best known for his role as Sulu on Star Trek, flew out on a Navy helicopter to join the crew of the Enterprise at 7 a.m. that morning and welcome them home. “Our vessel is the Starship Enterprise and this is the USS Enterprise,” he later said, “We’ve got a new drink—Enterprise on the Rocks.” Jokes aside, while Enterprise suffered no obvious damage, she underwent a thorough stress check to ensure her seaworthiness before her next deployment.

Capt. Kelly took full responsibility for the incident. “I am the captain and I was in control. I am totally responsible for what happened,” he said during a news conference. “Naturally, it’s embarrassing.” Although collisions and groundings are usually career-enders for Navy ship captains, Capt. Kelly, who had been selected for promotion to commodore, was eventually promoted all the way to four-star admiral and served as the Commander-in-Chief of the U.S. Pacific Fleet from 1991 to 1994.

Eight months at sea, running aground in sight of loved ones, rocking the ship off of a sandbar, and all while George Takei was on board. The 1982-1983 WESTPAC tour was a truly unforgettable experience for the crew of the USS Enterprise.