When desertion is a death sentence - We Are The Mighty

When desertion is a death sentence 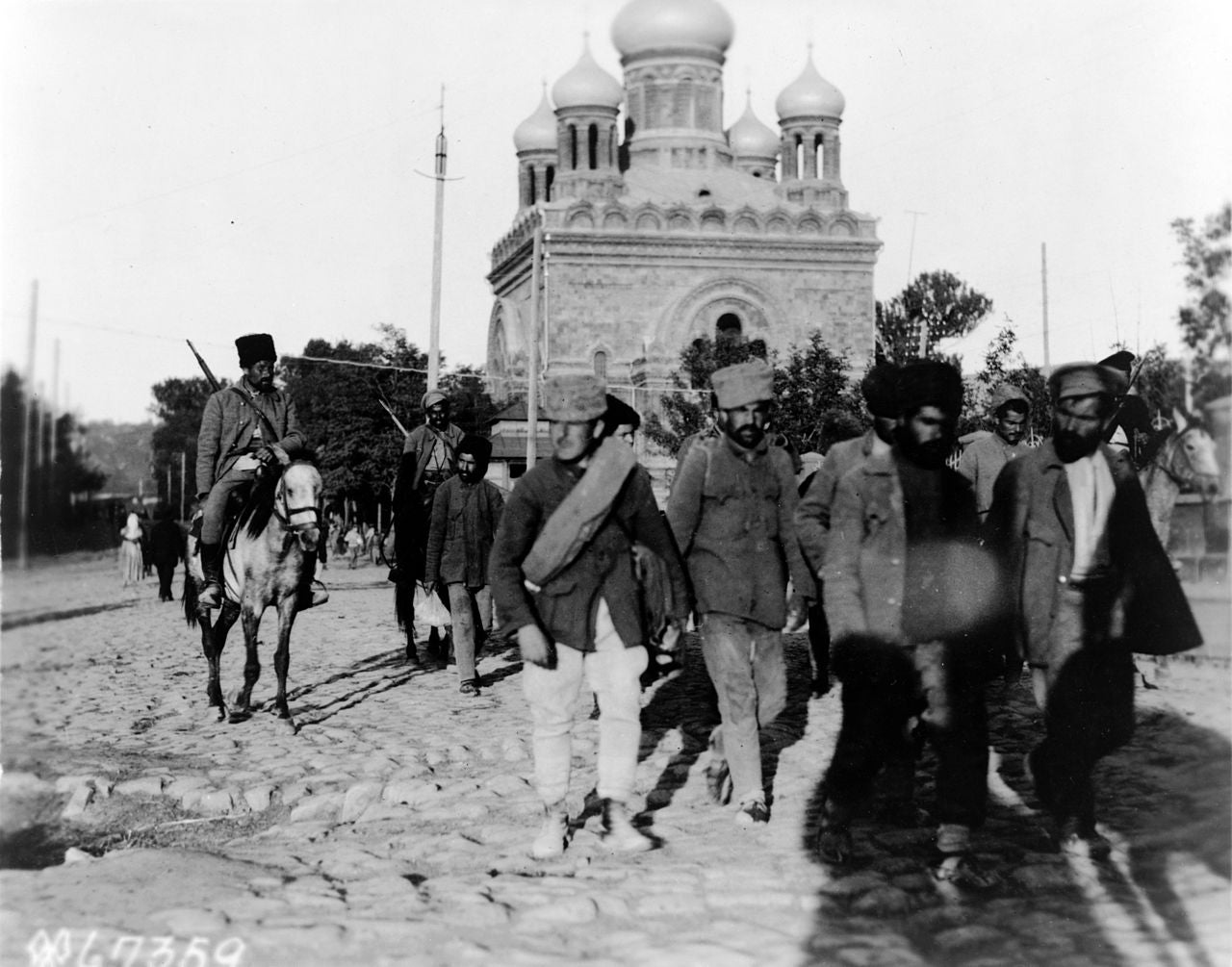 Armenian soldiers bringing in a bunch of prisoners, these men were deserters from the Armenian army. Photo shows men walking in front of soldiers on horseback on a cobblestone street; church in background. Photograph taken during the American Military Mission to Armenia (1919) led by General James G. Harbord. (U.S. Army photo).

Of all the things a soldier can do to lose the respect of his brothers in arms, desertion is close to the top of the list. Desertion during a time of war is even worse. The consequences for abandoning one’s military duties can be severe; it’s perfectly legal to sentence a deserter to life in prison. In severe circumstances, it’s legal to sentence someone to death.

It’s safe to say that desertion is a cowardly move, but should it forfeit a man’s right to live? For the vast majority of US history, the courts have said no. Few soldiers today are punished for desertion at all. They’re likely to be discharged and may face fines, but during the Iraq War, only 5% of deserters received court-martials. No one has received the death penalty for desertion since the Civil War aside from one very, very unlucky Army private named Eddie Slovik.

Born in Detroit in 1920, Slovik spent most of his teen years in and out of jail. He was charged with assault and burglary on multiple occasions. As he entered his 20s, he began getting his life together. He fell in love with Antoinette Wisniewski, a bookkeeper who was five years older than him. Her charm and wisdom must have made quite the impression because they married after a mere six months.

From then on, he seemed to be on a positive path. He got a job as a shipping clerk for Chrysler and ditched the crime habit. Being on parole also kept him out of the draft for WWII. Unfortunately for him, when he was finally discharged, he was no longer safe. He had no interest in enlisting, but he didn’t have a choice.

After he was inducted, Slovik compared military life to jail.

From the start, he actively tried to avoid combat. He tried to dumb himself down to avoid being deployed, but he was sent overseas about a year later. He was stationed in Elbeuf, France, with Company G, 109th Regiment, 28th Division, and they immediately encountered shellfire upon their arrival. The company dug a foxhole on the edge of the city, but when the company was ordered into town, a petrified Slovik didn’t budge. No one even realized he had stayed behind.

When the 109th moved out the next day, a friend of his, Private John P. Tankey, was left behind by mistake. The pair befriended a Canadian military police outfit, and elected to stay with the Canadians for weeks, helping as needed- just not in combat. When the two eventually reunited with the 109th, no one questioned them. Getting separated wasn’t uncommon. While Tankey continued fighting, however, Slovik was still adamant about never discharging his weapon.

His commander knew of his desertion plans ahead of time.

Reportedly, Slovik asked Captain Ralph O. Grotte directly if it would be considered desertion of he disappeared again. The captain, worried, told him yes. He told Tankey to dissuade Slovik from carrying out his plans, but Slovik’s mind was made up.

Slovik turned himself in for desertion before he even deserted.

With a hand-written confession, Slovik announced that he would leave again if he was forced to fight. Essentially, he claimed that jail time was more acceptable to him than combat. He wanted to be court-martialed, assuming it would get him a few years in jail until the war was over.

A lieutenant and 28th Division judge advocate knew the risks of Slovik’s point-blank refusal to serve. He warned Slovik that a lengthy prison term was likely, and the death sentence wasn’t off the table. Despite being offered the option of returning to his unit without punishment, he refused. An Army psychiatrist ruled that he was of sound mind, and the trial proceeded.

At the trial, guilt was a given. Punishment was the real question.

Slovik was represented by a court-martial counsel named Captain Edward P. Woods. The two men appeared in front of nine officers in Germany to determine his fate. Not a single deserter had been killed since the 1860s. Other soldiers had been executed, but for more severe crimes, like murder.

At the trial, Slovik didn’t even testify, and Woods presented no evidence. After all, his guilt was already apparent. An hour later, the nine judges unanimously agreed that Slovik should be “shot to death with musketry”. They voted a second time, and a third, but each time the ruling was the same.

The sentence for Slovik’s desertion filtered through several reviews. It held up.

First, a commander of the 28th Division approved it. Then, General Dwight D. Eisenhower did, followed by a staff attorney, Major Frederick J. Bertolet, and an additional theater judge advocate.

When Slovik realized the severity of his sentence, he begged Eisenhower for forgiveness. That may have worked, except that he chose to lie. “I didn’t realize at the time what I was doing, or what the word desertion meant,” he wrote to Eisenhower. “I had no intentions of deserting the Army whatsoever.”

Obviously, that wasn’t true in the slightest, and Eisenhower confirmed the sentence once again. After a final review on January 6th, 1945, the sentence was finalized. On the 31st of the month, he was executed by a 12-man firing squad in France. He was laid to rest in an unmarked grave in an American cemetery designated for soldiers who had been charged for murder or rape.

To a civilian like myself, losing your life for not wanting to fight seems downright inhumane. That said, I didn’t live through World War II. The military relied on drafted soldiers to show up and fight. If they hadn’t, history might have taken a very different direction. But still, death? Would life in prison not have been sufficient?

When he made his intention of desertion clear, he blatantly challenged the government’s authority.

That was unacceptable. Since Slovik seemed to welcome imprisonment, death was the only remaining punishment they had at their disposal. The military feared that if a soldier was allowed to openly choose to defy a draft, others would soon follow suit. If a draft could be defied, what other orders would soldiers ignore? The military relies heavily on consistent, unwavering compliance. If orders are only followed when soldiers agree with them, the effectiveness of the US military would crumble.

News of his execution wasn’t in any civilian paper. Not even his wife knew what really happened until 1954. While that tidbit is questionable, the choice to keep things quiet was admirable. That proved that the military wasn’t trying to make an example out of him.

At the end of the day, Slovik sealed his own fate.

Aside from a last-minute, desperate, half-assed apology, Slovik did little to help his own case. He said nothing in defense during his trial and gave Wood little evidence to work with. It took a unanimous decision to inflict the death penalty. He only had to earn the sympathy of one judge, but his flippant, almost arrogant disregard for authority did him no favors.

In short, his attempt to choose a safe life in prison was viewed as extreme disrespect to the countless soldiers who put themselves in danger daily. Since the day Slovik died in 1945, no other soldier has been executed for desertion. While execution is still legally permissible, the public attitude towards the death penalty has shifted over the decades. Whether his death was ethical or not, Eddie Slovik is likely the last US soldier to face a firing squad for desertion.  Hopefully, no one tries to test the system.