Bill Guarnere and Babe Heffron are immortalized in Band of Brothers 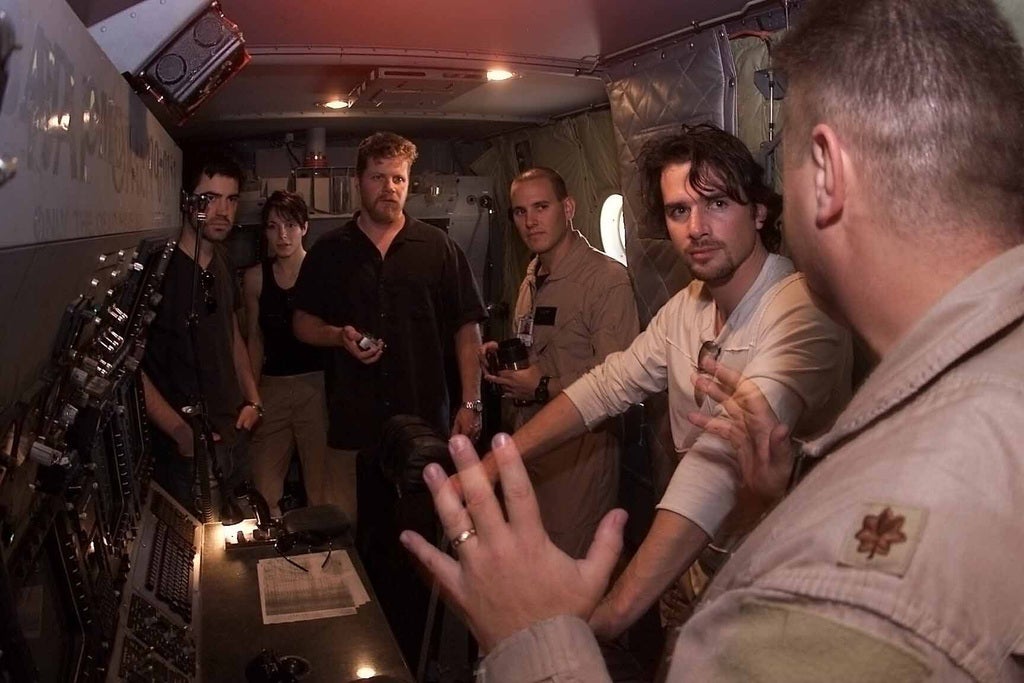 Cast members from the Home Box Office (HBO) World War II mini-series "Band of Brothers" are given a tour of an aircraft by US Air Force (USAF) personnel at an undisclosed location. Cast members are part of a United Service OrganizationÕs (USO) tour visiting deployed troops overseas.

Staff Sgt. William “Wild Bill” Guarnere and Pfc. Edward “Babe” Heffron’s stories were immortalized on screen by HBO’s miniseries Band of Brothers. The 2001 TV show follows the exploits of the famed Easy Company, 2nd Battalion, 506th Parachute Infantry Regiment, 101st Airborne Division which both men served in during WWII. Despite growing up just a few blocks from each other in South Philadelphia, Guarnere and Heffron did not meet until WWII and Easy Company brought them together in Europe. Their meeting is depicted in Band of Brothers’ third episode, Carentan.

Following their meeting, Guarnere and Heffron became close friends. They fought together in Holland during Operation Market Garden and in Belgium during the Battle of the Bulge. Guarnere lost his right leg during the latter battle while trying to drag another friend, Staff Sgt. Joe Toye, to safety after he lost his own right leg. Both Guarnere and Heffron survived the war and left the Army in 1945.

Afterwards, Guarnere and Heffron returned to their hometown of South Philly. Despite the loss of his leg, Guarnere worked odd jobs until he secured full disability from the Army. He became an active member of numerous veterans organizations and presided over many of Easy Company’s reunions. Moreover, he was best man at Heffron’s wedding in 1954 and was godfather to Heffron’s daughter. Heffron worked for Publicker Industries and later as a clerk and cargo checker on the Philly waterfront. Both men gave interviews and provided guidance on the making of Band of Brothers. Heffron even has a cameo in the fourth episode, Replacements, as a Dutch man waving a small flag as the troopers enter Eindhoven. Together, they later wrote a book about their experiences with Easy Company in Europe. Brothers in Battle, Best of Friends: Two WWII Paratroopers from the Original Band of Brothers Tell Their Story was published in 2007.

The two men remained close friends until Heffron’s death on December 1, 2013. A bronze statue called “Babe” was erected in his honor in 2015. The statue stands in front of Herron Playground at the corner of 2nd and Reed in South Philly. A portion of Heffron’s and his wife’s ashes are encased in a bronze heart inside of the statue. Guarnere passed away just a few months after Heffron on March 8, 2014. In 2019, the “Babe” statue was joined by “Wild Bill”, a second bronze statue that depicts Guarnere. The two friends and brothers in arms are reunited and immortalized in bronze in their hometown.

The statues, and Band of Brothers itself, pay tribute to the brave men that they depict and remind people today of their sacrifices. “Generations of Philadelphians will now be able to visit these statues dedicated to war heroes and close friends who bravely served their country,” said Philadelphia Mayor Jim Kenney. “They’ll be able to remember and honor Wild Bill and Babe as well as the many active duty and veteran soldiers who have risked their lives to keep all of us safe.”