Why the Tokyo Raiders didn’t bomb the Japanese emperor 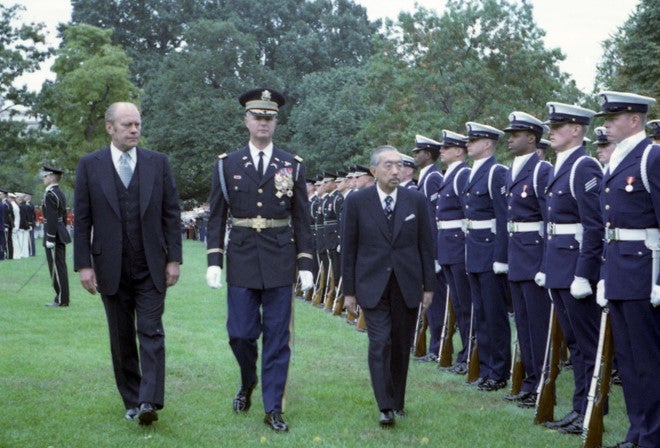 In the wake of the attack on Pearl Harbor, America was very angry and very eager to kick some ass — hence the decision to carry out the Doolittle raid. America wanted to take the fight to the enemy, and we wanted to do so as soon as possible. Enter the Tokyo Raiders.

We all know the story: Then-Lt. Col. James H. Doolittle recruited volunteer crews to fly 16 North American B-25 Mitchell medium bombers off the deck of the aircraft carrier USS Hornet (CV 8). Of the 80 men aboard the planes, three died in crashes or while bailing out, eight were captured (three of which were executed, one died as a POW), and the rest made their way back to friendly lines. Doolittle was awarded the Medal of Honor.

A 1979 aerial view of the Imperial Palace.

(Photo by Ministry of Land, Infrastructure, Transport, and Tourism)

As depicted in the movie Thirty Seconds Over Tokyo (based on the book of the same title by Ted Lawson), each of the raiders were allowed to pick their own targets. Several requested one particular target, but Doolittle denied the request each time. The target in question: The Imperial Palace.

Now, with America in a fight for survival, why would Doolittle deny that request? There’s good reason. Although history tells us that Hirohito made the decision to surrender in the wake of the atomic bombing of Hiroshima and Nagasaki, a traditional bombing wouldn’t have had the same effect. No, Doolittle and the Tokyo raiders had a very practical reason to not hit the Imperial Palace.

During World War II, the Japanese people viewed their emperor as a god — and it had been that way ever since Jimmu took the throne over 26 centuries prior. Hitting the Palace — and harming the Emperor — would have been very bad news for American troops. That didn’t stop some of the raiders, however, from buzzing the Palace.

The raid had frightful consequences for the Chinese civilians caught under Japan’s rule — over 250,000 were killed by the Japanese in retaliation. American POWs held by Japan were also in for a rough time. The raid also prompted Japan to move to take Midway Island — leading to the Battle of Midway, which turned the tides in the Pacific in favor of the Allied Forces.